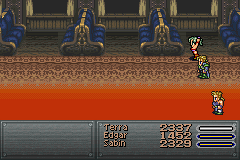 The Victory Fanfare (勝利のファンファーレ, Shōri no Fanfāre?), also known as simply "Victory" or "Fanfare", is a recurring piece of music that appears in many Final Fantasy games and is used often after a battle is won. While the same arrangement since the original Final Fantasy has been used repeatedly, certain titles contain different arrangements after the intro, or a new arrangement entirely.

The piece is titled "Victory" and plays when the player has won a battle encounter. An orchestral cover is used in the Pixel Remaster release.

The piece is titled "Victory".

"Fanfare" in both the original NES version and the 3D remakes. The original arrangement was released as "Battle 1 ~ Fanfare" as the third track of the Final Fantasy III Original Sound Version.

The original version also appears in the Final Fantasy XV music player in the Memories of FFIII album purchased from Coernix Station - Alstor for 100 gil.

"Fanfare" is included on the second disc of the Final Fantasy Vinyls collector's edition set in a track with "Battle 1".

"Victory's Fanfare" has been remastered on the Game Boy Advance port of Final Fantasy V.

The track is simply titled "Fanfare". It is the first to have some rock installment in its piece.

The track has been remastered on the Game Boy Advance port of Final Fantasy VI.

"Fanfare" plays after the player defeats an enemy encounter. Final Fantasy VII is the first game to use a different arrangement after the intro. Two variations of it are played at the end of of a chocobo race: "Jackpot!", which plays after a victorious race, and "Tango of Tears", which plays after a loss. This is also the first case where an arrangement plays on the victory rewards screen, instead of the rest of the fanfare. The 1996 demo version did not have a "Victory Fanfare" at all.

Loz's ringtone is the "Victory Fanfare" from Final Fantasy VII and plays during an interrupted portion of his fight with Tifa Lockhart in the Sector 5 slums church.

A slightly sped up version of the Final Fantasy VII fanfare is played if Zack completes a mission.

"Victory Fanfare" plays when winning a match at the Corneo Colosseum or Shinra Combat Simulator. Barret Wallace (base game) and Yuffie Kisaragi (Episode INTERmission) may randomly sing the victory fanfare tune after a successful random battle. An arrangement of "Tango of Tears" titled "Tango of Tears (Jukebox Ver.)" is one of the pieces of music for the jukebox that the player can unlock. In Episode INTERmission, "Victory Fanfare" plays at a victorious Fort Condor match.

"The Winner" plays at the end of a successful battle against an enemy or boss and after winning the card game Triple Triad. The track also uses a different arrangement after the intro.

The track is titled "Fanfare". As the nature of the game was in many ways to return to the series' roots, and in doing so, make connections with some of the previous games, Final Fantasy IX recovers the old Fanfare melody after two (main series) games of absence (excluding the variations heard at the Chocobo Square in Final Fantasy VII). In addition, the fanfare associated with key items or plot points from the earlier games is played simultaneously with the victory fanfare.

The "Victory Fanfare" plays after defeating an enemy encounter. Like Final Fantasy VII and Final Fantasy VIII, the fanfare uses a different arrangement after the intro. A short version consisting of the intro may also be played after obtaining certain key items.

"Mission Complete" is an entirely different arrangement not following the original motif and is played after successful battles and missions.

The track has a better quality in the Final Fantasy X/X-2 HD Remaster.

It also plays in Final Fantasy XIV at the end of the Alliance Raid The Ridorana Lighthouse.

A compressed version of "Victory Fanfare ~FFXII Version~" is used as the victory fanfare after completing missions. The track has the same composition as the Final Fantasy XII with synthesized instruments.

"Glory's Fanfare" is an entirely new fanfare. Composed by Masashi Hamauzu, it is aptly followed by "Battle Results", a soothing vocal track accompanied by piano and synthesizer.

An early arrangement of the "Battle Results" track has been discovered as an unused file on the PS3 game. The arrangement remains the same, while some instruments are missing on the early arrangement. It also lacks the vocal portion and the ending part.

"Glory's Fanfare ~ Battle Results" appears in Lightning Returns as the victory fanfare that plays when Lightning finishes a battle in her Guardian Corps garb.

Similarly to its predecessor, "Honor's Fanfare" is an entirely new composition containing a synthesizer, which draws similarities to "Glory's Fanfare" and "Battle Results" being a rather peaceful tune. It was composed by Naoshi Mizuta. It is played when the player has achieved four stars or less.

Another track, titled "Blessed Fanfare", is Mitsuto Suzuki's composition and draws similarities to the traditional "Victory Fanfare" being an upbeat tune. It also uses synthesizers like "Honor's Fanfare". "Blessed Fanfare" is only played when the player has finished a battle with a five-star rating.

"Blessed Fanfare" appears in Lightning Returns as the victory fanfare that plays when completing a battle in Knight of Etro garb.

A wide array of victory fanfares are used, although the primary victory theme is "Salvation's Fanfare" which plays when completing a battle in garb created exclusively for the game. When Lightning successfully completes a battle in the Slaughterhouse, the crowd can be heard cheering the traditional "Victory Fanfare" instead of an original victory fanfare composition from the trilogy.

The original "Victory Fanfare" returns and is played after completing a Guildleve, Behest, Instanced Dungeon or Primal battle. In A Realm Reborn, the version 1.0 victory fanfare can be heard when winning a Chocobo Race in the Manderville Gold Saucer. If the player loses a chocobo race, a different version of the fanfare is heard, but with a calm remix of the chocobo theme after the intro.

"In the Arms of Althyk," a calm remix of the song, plays when sleeping inside an inn room.

In A Realm Reborn, the new version of the victory fanfare is used when the player completes an instanced Dungeon or Boss Trial. A shortened version also plays when a player gains a level in their current class.

"In the Arms of Althyk" returns when players are sleeping in inn rooms.

The traditional Final Fantasy victory fanfare, titled "Day's End Fanfare", plays when resting at a campsite or a lodging. The track was composed by Yoko Shimomura.

Prompto can sing the victory fanfare after battle, and he may sing different versions of it after patch 1.21. He will also sing it when a critical Recoil technique is executed. In Episode Prompto, after Prompto and Aranea defeat Immortalis, Ardyn watches Prompto ride towards Gralea, and sings the "Victory Fanfare".

An arrangement of the victory fanfare plays when winning a chocobo race. The "Victory Fanfare" also appears in Final Fantasy XV: Comrades at end of quests. The Test version had a different arrangement than the final version. Felling Omega will play the fanfare as well.

The original theme from the first Final Fantasy is included in the music player. It is also on the Memories of FFV album bought for 100 gil from Aldare's shop in Galdin Quay and on the Memories of DISSIDIA FF as "Victory Fanfare -Cosmos-", purchasable from Old Lestallum for 500 gil.

In place of the standard victory fanfare, the original tune, composed by Hitoshi Sakimoto, is "Bell of Victory". It is the eight track on disc 1 of the original soundtrack. While the soundtrack features two versions of a track; a Game Boy Advance original version: synthesized from the console's built-in sound engine, and the "Full Sound" orchestral version, there is only the Game Boy Advance version for this track.

The track called "Grasp Victory" plays whenever the party wins a battle. It is composed by Hitoshi Sakimoto.

Though not as a song, Hurdy mentions it in the quote "I have to play the Victory Fanfare when we win, right, kupo?" during the final battle.

The track aptly named "Fanfare" is played after every boss battle and solved puzzle. It is an entirely different melody altogether.

The original fanfare is used and only heard upon leveling up.

"Prize Competition" plays when King Kolka awards the players prizes for completing one of his missions. This is the first time the "Victory Fanfare" tune is used in a Final Fantasy Crystal Chronicles game.

An arrangement of the "Victory Fanfare" plays after the player completes a quest.

The track was composed by Yasuhiro Kawakami, and Ryuji Sasai.

"Victory" is composed by Naoshi Mizuta and has an altogether different arrangement.

"Sheathe the Sword" is the victory fanfare. The opening melody is modeled after the signature "Victory Fanfare".

Kefka Palazzo also hums the fanfare as one of his victory quotes. Finishing the Data install process will play the Final Fantasy V version of this song. Conversely, the game also introduces a "Defeat Fanfare", played when the player loses a battle, which is the same for all characters, Warrior of Cosmos and Chaos alike.

The fanfare from NT is played during the battle results montage for each mission. If a player's party has a unit with Burst Mode engaged and the Finishing Burst is used, a victory fanfare from the attacker's original title will play instead. This does not apply to Finishing Bursts called by solo-mode support units.

Simply named "Win", it is played when the player wins a race.

"Victory from Final Fantasy I" is the victory theme.

"Victory" (勝利, shouri?), it retains the same melody as the game series' "Victory Fanfare". The track plays whenever Earl Tyrant's minions are defeated.

The original victory themes from each game are played dependent upon the Realm in which a Record is cleared, unless the dungeon is neutral, in which case the Final Fantasy V version is used.

A new orchestral remix of the original medley plays when the player gracefully terminates a quest or wins a battle.

A new orchestral mix of the Victory Fanfare plays upon completion of a mission's primary objective, and continues through the results montage.

"Victory Melody" is an entirely new composition, despite the game featuring numerous references to and characters from throughout the Final Fantasy series. It plays after most victories.

This time arranged as an orchestral piece, the theme was included in the sequel to Distant Worlds: Music from Final Fantasy, performed by the Royal Stockholm Philharmonic Orchestra.

"Victory Theme" is included on this live recording of an orchestral concert, performed by the Kanagawa Philharmonic Orchestra and conducted by Arnie Roth held in Tokyo, in November 2010.

"Lucca's Theme" from Chrono Trigger (which was cycled for battle victory themes in Chrono Cross) has drawn a lot of comparisons to the standard Final Fantasy victory fanfare.

Each Final Fantasy VII character that wins their match will play the victory fanfare while they perform their victory pose.

Named "Victory Over Culex", it plays when players defeat the hidden superboss Culex, who is based on Final Fantasy bosses. The game otherwise uses a different fanfare, titled "Victory!!".

A remix of the Final Fantasy VII version of the fanfare serves as Cloud's victory theme. Cloud's loops until the player advances past the results screen making it the longest victory theme in the Smash Bros. series.

In Kingdom Hearts III, the victory fanfare plays after building a giant Cactuar out of blocks in the Toy Box.

An arrangement of the victory fanfare was played during the flag parade of the opening ceremony. Arrangements of "Final Fantasy" and "Olympus Coliseum" from Kingdom Hearts were also featured.