The smell of antiseptic, lollipops, strawberries

Carrie Savage
Victoria F. Stein is a non-playable character from Bravely Default and Bravely Default: Praying Brage. She is a member of the Council of Six and keeper of the Arcanist asterisk.

A powerful caster adept at death magic and spells that affect the entire field with effects based on BP. She is unrivaled in offensive magic.

A woman of unknown age hailing from Florem. She goes by the name Victoria F. Stein, and is holder of the arcanist asterisk. Despite her infantile looks, she has a viciously cruel personality. She despises the Orthodoxy and the vestals.

Victoria's actual age is not mentioned, but she has a child-like appearance. Victoria has long black hair in pigtails kept with long, corset-like red, white, and grey bands, on each one and dark grey eyes. She also has two rounded, striped ornaments at the tips of her hair, similar to a jester's cap. She also has a red and white head ornament, which is attached to the bands holding her hair along with two red ovals covering her ears. She wears a short red dress attached with a red fox tail with a white tip. Under the dress, she wears white bloomers. She has long white gloves and thigh-high red boots. She wields a scepter with a red and white diamond at the top, which is adorned with a jester cap-like ornament.

Due to the experiments done on her, Victoria lacks self-control and is prone to violent acts. She often despises people for not fully appreciating the good things in their life, showing that she can see the true value of things and appreciate them with a grudge on anyone who does not.

Prior to the game, Victoria was a vestaling of the Crystal Orthodoxy who was discarded for suffering a fatal illness. Taken in by Braev Lee, Victoria was to be saved by Victor S. Court using the White Magic cables. However, Victor's father Vincent S. Court used the forbidden alchemic genesis process to give her new life. This caused numerous side effects that included her stunted growth, and caused her emotions to spiral out of control to the point of insanity and tied to her degenerative condition which required regular treatments in White Magic stasis chambers. Regardless, sharing Braev's desire to end the Orthodoxy as she murdered Vincent in a moment of clarity, Victoria joined him as a member of Council of Six alongside Victor. Not sharing Braev's ideas, Victoria's only motivation is destroying the Orthodoxy and anyone who gets in her way.

During the course of the game, having won Florem's beauty contest by secretly taking out the favored contestants, Victoria follows Agnès's party to the hidden city. It is here where she ends up killing Olivia Oblige before a seizure forces her to fall back to Eternia to be healed. Later, when the group arrives to Central Command, Victoria attempts to have her fun with the wind vestal's party before being placed in the White Magic stasis chamber. Once emerging from the chamber, commenting on Victor on telling her life story to them, she admits that she cannot last much longer and suspects her end is near, Victoria fights the group before she and Victor die in battle. If Victor is killed before Victoria, she sadly admits that her death is ensured while intending to drag them down with her.

Alternate reality versions of Victoria in the Second and Third Worlds are also encountered as the party learn more of her tragic past. In the Fourth World, Victoria is revealed to have become good friends with Artemia Venus and Konoe Kikyo as the three have a secret "girls' meeting" before attacking the wind vestal's party for eavesdropping and leaving while insulting Agnès and Edea. In the remaining world, Victoria is to her slight consternation made the leader of Lester DeRosso, Ciggma Khint, and Fiore DeRosa in dealing with the wind vestal's party when they arrive at the Eternian Central Command.

Victoria is first fought alongside Victor when the party meet Olivia at the Western Hidden Village. This battle is designed to be unwinnable, with it ending after a certain number of turns or after the party is defeated, whichever comes first.

The true battle comes at Eternian Central Command, where she again fights alongside Victor. She can be rebattled in each subsequent world. The battle in Eternian Central Command is repeated in the second and third worlds, with Victoria becoming slightly stronger. In the fourth world, she is fought alongside Artemia and Konoe Kikyo. In the fifth world she leads the team known as Ailment Hell, which focuses on status effects, which includes DeRosso, Khint, and DeRosa.

In battle, Victoria uses the abilities of the Arcanist job, which focuses on powerful Black Magic such as Dark or Exterminate, which damages poisoned fighters.

Victoria is voiced by Kanon Tani in the Japanese version.

She is voiced by Carrie Savage in the English version. She shares her English voice actress with Cissnei from Crisis Core -Final Fantasy VII- and Althea from Final Fantasy Crystal Chronicles: The Crystal Bearers.

Victoria appears as an obtainable unit. 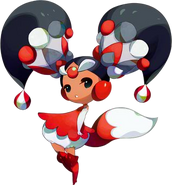 Victoria appeared as a weapon in a collaboration event.[1]

Victoria appears on a sticker set for the LINE communications app. The sticker set she appears in is titled "Bravely Stickers - Volume 1".[2]

Victoria in the manga.

Victoria is the Latin word for 'victory' or 'conquer' and is used as the feminine form corresponding to the name Victor. Her full name is a reference to Victor Frankenstein, the protagonist of the titular novel, due to her nature as an experiment in artificial life.