Research Chief Verstael Besithia made a name for himself by almost single-handedly engineering a method to mass produce a magitek infantry. His rise to prominence also exacerbated his descent into madness, however, and his once-held hopes for peaceful world have warped into a lust for power and desire to wreak destruction.

Though he has a small role in the main game, he is more prominent in the DLC episodes and his reports and journal entries shed light on the workings of daemons and the Starscourge.

Mad scientist affiliated with the imperial infantry. A renowned researcher, he pushed for the mass production of an army of automata that utilized ancient magiteknology brought to his attention by Ardyn. His efforts encouraged the militarization of the empire and earned him a handsome promotion to boot. Using his newfound position, Verstael pushed forward with a new pet project: a series of experiments involving daemonic creatures. His research cost millions of gil and countless innocent lives—yet he was determined to let nothing stand in the way of what he deemed his "life's work."

Verstael is a balding man with white hair and beard. In his concept artwork and official render he wears a silver headpiece that has the symbol of Niflheim, but he does not wear it in the game. He wears a uniform of black metal and purple and red clothing and a cape. In his concept artwork his long gloves are white with the red symbol of Niflheim, but in the game his gloves are black.

Thirty years prior to the main story, as depicted in Episode Ardyn, a younger Verstael had blond hair, blue eyes, freckled complexion and only a hint of a beard, having the same facial features as Prompto Argentum.

The Oracle holds the key for the King. She could unlock many secrets...'nay high commander?

Verstael is a mad scientist who aims to create "the strongest existence by his own hand". He is in charge of Niflheim's magitek research laboratories, which produce magitek troopers, magitek armors and even daemons. He is ruthless, and considers the Astrals—the gods of Eos—as just another research subject.[note 1]

Initially, Verstael was loyal to Niflheim and his despicable actions were all for the sake of his homeland. He also did have some morality in his early stages of experimenting, as he hesitated using humans, especially children. However, he was able to ignore these feelings and even delude himself into thinking that the victims of the Starscourge would prefer to be used for his experiments over having died "in vain". As his experiments continued, Verstael grew increasingly arrogant and self-absorbed, viewing his results as transcending the gods, and no longer cared for the empire, stating his desire to destroy the world and everything in it, believing that the world had denied him of the glories he had given to it.

Verstael's first encounter with a daemon was in his childhood days, and rather than being afraid, he found himself intensely intrigued by the being. In time, he became labeled a madman for his willingness to study daemons, but reasoned that understanding that which the populace fears is a vital step toward enlightenment.[1]

Verstael, for some time, had been experimenting in creating magitek troopers (MT), robotic humanoids who would fight for Niflheim, though little progress was made. A scientist belonging to the Niflheim Imperial Army, and the leading magitek researcher, he took notice of the Lucian outlaw dubbed "Adagium" he had read about in an ancient tome discovered in a royal tomb. In M.E. 721 he discovered and released Ardyn from his imprisonment on Angelgard and brought him to an imperial research facility.

After seven months of recuperation Ardyn was strong enough to be aware of his surroundings, and Verstael introduced him to his research, including the results he had gleaned from Ardyn himself. Verstael was impressed how Ardyn possessed the power of daemons yet remained cognizant and able to operate in daylight due to the rate his body regenerated. Though Ardyn remained depressed and self-loathing, calling himself a monster, Verstael assured he was a marvel for having transcended human existence to something close to divinity. Verstael showed Ardyn the slumbering Ifrit the empire had excavated from the Rock of Ravatogh and asked Ardyn to daemonify him, having witnessed the latter's powers over darkness during their escape from Angelgard. Ardyn was horrified. The Lucian Royal Guard attacked the lab and Ardyn defended himself with the powers of darkness. The commotion awoke the sleeping god and Ardyn subjugated the deity and inherited his memories. The shock of it sent Ardyn down a dark path and he came to lust for revenge against Lucis, egged on by a megalomanic Verstael.

In M.E. 722, Verstael introduced Izunia to Emperor Aldercapt in a bid to get more funding for his projects.[2] Izunia ingratiated himself by divulging the secrets of binding daemonic essences, miasma, to create an army of automata, and promises on how further research into this could grant the emperor immortality.[3]

Verstael led the development within the empire that harvested energy from daemons to create weapons of warfare. The empire employed mercenaries to capture them from old ruins, like those dating back to the ancient civilization of Solheim. "Project Deathless" is the codename given to Verstael's research and development of magitek soldiers and weaponry through the manipulation of "commonly occurring parasitic protozoa", i.e. the Starscourge. These findings paved the way to weaponize daemons. As daemons are averse to light, with their cellular structure breaking down upon contact with it, the troopers are equipped with medieval armor.

Verstael creates MTs out of daemonified humans. His initial tests resulted in the soldiers suffering ego death and be unable to fight, and thus he began using infants. When in need for more material to create an army, he began to clone humans from his own genetic material and raising the infants to become MTs. The subjects are kept dormant in tubes until they become infected with the Starscourge and the miasma exuded by the subjects is fed into magitek cores that power magitek troopers. The First Magitek Production Facility was completed on 26th November, M.E 723. Described as a "rising military star" and an authority on magitek, Verstael was appointed to oversee the facility and relinquished his field duties to work at the compound full-time. In October M.E. 724, Verstael stopped disposing the powerful daemons manifesting at the magitek laboratories from the harvested miasma, deciding to use them in experiments instead.

In M.E. 734 Verstael and Ardyn conspired to weaken the magical barrier that protects the Crown City of Lucis from imperial aggression. Ardyn snuck into the city under supernatural disguise, and while in communication with Verstael, summoned Ifrit upon the city. After disabling a number of Wall amplifiers he strayed from their plan and headed to the Citadel to kill King Regis despite Verstael's protests. Verstael was waiting outside to attack Insomnia when its Wall would weaken, but the Wall held and Verstael withdrew. Learning from this, Niflheim would later employ a different tactic to take down the Wall.[4] Ardyn was unsuccessful in regicide, and returned to the empire.

In M.E. 736 Lucian spies kidnapped a baby clone from a magitek production facility. Verstael tightened security around the magitek labs so the incident would not recur.

Following the success of these new soldiers in slaying the Glacian in M.E. 745, Verstael's research was granted more funding. Ardyn had spurred Verstael into developing "specialized anti-deity daemonic weaponry" and its experimental form came to use against the Glacian.[5] With the data Verstael collected from Shiva, he began developing a new magitek weapon codenamed the "Godslayer". He became known as a hero who saved Niflheim from an eternal winter, and many clamored to work under him.

Verstael had begun to view daemons as the superior life form, and developed delusions of grandeur to enhance them further with his magitek to surpass even the Astrals. Though the magitek infantry is a success, Verstael continues to develop ever bigger and more complex magitek creations, such as the Diamond Weapon, which is unleashed to destroy Insomnia in M.E. 756. After Insomnia's fall Verstael meets with Emperor Aldercapt, Commodore Highwind, Brigadier General Ulldor, and High Commander Fleuret to discuss the Oracle, Lunafreya. When the emperor orders Ravus to terminate her, Verstael asks him to reconsider, citing her power to commune with the Astrals and being the "key for the King". He then gives Ravus full control over the magitek infantry.

As depicted in Episode Prompto, Verstael is slowly turning into a daemon himself. When MTs abduct the lost Prompto and bring him to the magitek facility, he finds Verstael as orchestrated by Ardyn, who calls it a heartfelt father-son-reunion. Prompto is the infant who was kidnapped from the facility, who had grown up in Lucis unaware of his origins.

Prompto scours through the magitek production facility and reads the documents he comes across. He comes to believe Insomnia was destroyed at the behest of Verstael, who had wanted to witness the full power of the magitek army he had created, and to gain access to the Crystal to experiment on it. The empire did steal the Crystal, but there is no record of Verstael ever getting his hands on it. The magitek facilities Prompto scours are empty of researchers, and it is implied Verstael deliberately let them turn into daemons and sabotaged efforts to contain outbreaks.

During their confrontation Verstael calls Prompto a failure for not having become a daemon. Verstael has begun to use even his own soul for magitek experiments, ready to transcend his human existence to something superior. Prompto shoots Verstael, whose soul fuses with his latest invention, Immortalis. The magitek monstrosity activates with Verstael's consciousness uploaded into it, and declares its intention to destroy the world. Prompto and Aranea combine their efforts to slay it.

When Prince Noctis later infiltrates Zegnautus Keep in Gralea, he finds it void of human life and swarming with daemons and rogue magitek troopers. He finds documents detailing Verstael's magitek research, and discovers the ramifications of using said technology.

Verstael is fought as the final boss of Episode Prompto in the form of Immortalis.

Verstael was designed by Roberto Ferrari. He has a prominent appearance in the Final Fantasy XV E3 2013 trailer, leading an army of armored soldiers. These are magitek soldiers in the final game, where Verstael doesn't have a prominent presence until Episode Prompto.

Verstael was redesigned for Episode Ardyn, and his design was adjusted numerous times during planning phase.[4] He was made to look like Prompto.

Verstael is voiced in English by Steve Blum,[6] who previously voiced Vincent Valentine from the Compilation of Final Fantasy VII, Ba'Gamnan in Final Fantasy XII and Cid Aulstyne from Final Fantasy Type-0.

Verstael at the magitek production facility. 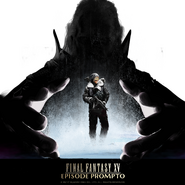 The final version of the key art.

Versatilis is Latin for changeable or fluctuating in nature.

Bestia is Latin for beast.