Don't suppose you'll take it easy on us.

Vercingetorix is an enemy in Final Fantasy XIII. It is the mark of the final Cie'th Stone Mission and is one of the Undying. The Cie'th Stone required to accept the mission is available after beating Missions 27 to 51, and after beating Barthandelus in Oerba.

The Stone is at the end of the broken railway bridge in Oerba, where Barthandelus is fought at the end of Chapter 11. The Cie'th Stone and the mark are on the furthest opposing ends of Gran Pulse: Vercingetorix is found in Yaschas Massif Paddraean Archaeopolis.

Vercingetorix, along with the Long Gui, can be considered the game's superbosses.

Vercingetorix, bane lord of the Undying, lives on. But how? I smote the fiend's ruin so long ago it seems an eternity. Yet it was my Focus then, as it is now, and at his end I turned to crystal. Did some unearthly power quicken his lifeless corpse again, even as I dreamt?

No matter. I know where he lurks: in the Paddraean archaeopolis, whose doom he did herald. There do I go, to bury the beast as many times as I must.

Vercingetorix is a flying enemy similar to related enemies Mithridates and Bituitus. He initially has two wings, but will sprout two additional wings as his HP reaches the 90%, 60%, and 30% milestones. His Wing Shear attack hits 9 times with 2 wings, 15 times with 4, 21 times with 6, and 27 times with 8. After Vercingetorix's HP falls below 90%, he will start using Putrescence, an attack that deals damage and removes two buffs from a party member. This attack will be executed twice with 8 wings. Another attack Vercingetorix uses is Wicked Whirl, a 14-hit barrage with a strong finisher that launches party members. Despite these attack animations appearing elemental, all of Vercingetorix's attacks are non-elemental.

Vercingetorix continually casts Impenetrable Aura, resetting the chain gauge, becoming immune to damage, and gradually recovering health. The amount of HP it recovers is [(Max HP - Remaining HP) * 0.01] x 8. The recovery removes status ailments and adds Bravery; with four wings the recovery skill adds Faith; with six wings it adds Protect; and with eight wings it also adds Shell. It is during Impenetrable Aura that he acquires new wings. During his HP >60% phase, Vercingetorix will use Impenetrable Aura as soon as his chain gauge exceeds 200%.

After 30 minutes of battle time Vercingetorix will cast Doom on the party leader.

Before the battle, the party should be well-developed in the Crystarium (all of them should have Sentinel and possibly Medic), and it is recommended—though not necessary—to have the Crystarium maxed out.

Equipping damage-reducing accessories, such as Imperial Armlets and Royal Armlets, is advised, as are accessories that boost Strength or Magic. The extra ATB slot granted by the tier 3 weapons can be of great help.

It is especially advantageous if one or more characters are equipped with accessories that synthesize Physical/Magic Wall, since Vercingetorix generally uses a high number of low-level attacks, and both "walls" negate the first 5 to 30 points of damage for every hit taken. The weapons that enhance both Vanille and Fang's debuffing abilities are good as they make debuffs more likely to stick.

A good party is Vanille, Fang and Lightning, since Vanille and Lightning know Poison (Hope knows Poisonga, but that will be of little use here), and having Vanille as leader allows the player to manually cast Poison during the attack phase, and Faithra and Bravera during the buffing phase. Tortoise (SEN/SEN/SEN), Infiltration (SAB/SAB/SAB) and Rapid Growth (SYN/SYN/SYN) are all useful paradigms for the battle.

The party should start with Infiltration, and either cast Libra, or use a Librascope so the AI will know what to do. The aim is to cast as many status ailments on Vercingetorix as possible, especially Poison, which damages the target's HP by draining a constant percentage of the target's total health. Because Poison takes off a fixed percentage per time regardless of number of hit points, it is especially advantageous on enemies with high HP, such as Vercingetorix. It is even possible to win the battle with just the help of Poison, shifting to a healing/defensive paradigm as soon as Poison has been inflicted.

After Poison sticks the party can shift to an offensive paradigm to build up the chain gauge, and shift to a healing paradigm as soon Vercingetorix either casts Impenetrable Aura, or a party member's health drops below ~10,000. If a party member is KO'd they can be revived via a Phoenix Down, as this will fully restore the character's health, unlike Raise. Once the party is healed they should shift to Rapid Growth and buff before Vercingetorix begins attacking again.

Whenever the words "Wicked Whirl" appear the party should shift to Tortoise to mitigate the damage.

Players can find it difficult to survive when Vercingetorix has sprouted all of his wings. If this is the case, Vanille can lead the party as she has an Eidolon with an attack requiring the use of just one unit. The party can stomp Vercingetorix down to low health (at around 5 million HP, or 10 million if the party has an Elixir), then poison him, summon Hecatoncheir, get a reasonable Gestalt Bar, then enter Gestalt Mode and idle, which makes Hecatoncheir use only Chain Cannons, hoping that Poison will kill Vercingetorix before Vanille runs out of time counters.

This is an effective strategy that almost guarantees a five star battle rating and operates on the idea that Poison still affects the target while the player is in Gestalt Mode. Vanille is best equipped with her debuffing weapon (Belladonna Wand and its upgrade Malboro Wand) and go for the Gestalt Boost synthesized ability (Speed Sash, Energy Sash, Champion's Badge and Survivalist Catalog). 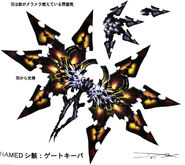 [view · edit · purge]Vercingetorix was a chieftain of the Arverni tribe during an unsuccessful revolt against Roman Forces during the last stage of Julius Caesar's Gallic Wars.