Edit
watch 01:34
How to Obtain Cid's Venus Gospel in 'Final Fantasy 7'
Do you like this video?
Play Sound

A weapon for the gentle of heart, this spear is constructed to prevent damage to an opponent.

Venus Gospel (ビーナスゴスペル, Bīnasugosuperu?) is a recurring spear in the series.

Venus Gospel is Cid Highwind's ultimate weapon obtained in Rocket Town after the Huge Materia mission. After returning to the village, the player can talk to the old man who used to gaze at the rocket; after talking to him three times he will hand the spear over.

The spear has Attack power of 97, Hit rate of 103%, Magic of 42, and zero Materia growth. It has eight Materia slots in four linked pairs. The spear deals more damage the closer Cid's max MP is to his current MP.

Venus Gospel is a spear for Fang obtained by upgrading the Taming Pole (obtained in a treasure sphere in Oerba or bought from Gilgamesh's shop in the Retail Network) with the Uraninite catalyst. It has the passive ability Stagger Lock, which prevents Fang from Staggering enemies, although she can still build their chain gauge. The Stagger Lock trait can be combined with other equipment for another Passive ability, the Random: Instant Chain.

The Venus Gospel appears as a 2-handed spear within the Forsaken Dungeon. It provides 95 Weapon Atk, 10 Durability, +10 Magic Def, -5 Speed, and -4 Consumption Rate. Only Masuda Koji can equip this weapon. 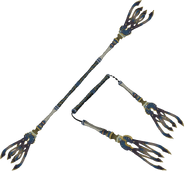 [view · edit · purge]Venus is the second-closest planet to the Sun. Venus is also the Roman goddess of love, beauty and fertility, and in Greek mythology, she is known as Aphrodite. The noun form venus means "love" and "sexual desire" in Latin.

[view · edit · purge]The word gospel derives from the Old English gōd-spell meaning "good news" or "glad tidings". A gospel is an account, often written, that describes the life of Jesus of Nazareth. In a more general sense the term "gospel" may refer to the good news message of the New Testament.