Azem of the Convocation of Fourteen (former), Heart of Hydaelyn

Lands that stretched on forever. Skies one could drown in. The heartbeat of nature, silent yet strong. And amidst it all a people. Beacons of light and life. Laughter that warmed my heart like naught else before. They are my meaning and my purpose. My love.

Venat is a character from Final Fantasy XIV. She is the Amaurotine who led the splinter faction in opposition to the Convocation of Fourteen. She is kind and compassionate, wanting to protect and care for all denizens of the world.

A brilliant scholar and adventurer at heart, Venat held the seat of "Azem" on the Convocation of Fourteen, and spent her time exploring the world of Etheirys and coming to love all the people and life within it. When she stepped down as Azem, Venat's successor was her friend and student. After she left the Convocation, Venat began working at the concept research facility Elpis rather than returning to the star, as she felt that she still had things to offer to Etheirys.

After the Warrior of Light traveled back to her time in the unsundered world, Venat detected her protection magick on them and revealed to Emet-Selch and Hythlodaeus that the Warrior was, in fact, someone from the future rather than Azem's familiar. Venat learned of her future as Hydaelyn and traveled Elpis together with the Warrior, seeking the cause of the Final Days. She asked them about their time as an adventurer in Eorzea, and even challenged them to a sparring match.

Has your journey been good? Has it been worthwhile?

Venat, asking the Warrior of Light about their adventures.

After confronting the chief overseer of Elpis Hermes alongside the Warrior, Emet-Selch, and Hythlodaeus, she learned about the Final Days' harbinger: Meteion and her sisters. When the sisters began to report their findings about other life in the universe, Meteion's individuality began to wane, and she tried to flee to prevent Hermes from hearing the report. Venat, the Warrior, Emet-Selch, and Hythlodaeus gave chase, and eventually cornered her. The report carried on, revealing that all the Meteia had discovered were dead worlds, or worlds on the brink of death due to failed experiments, war, or other similar reasons.

Hermes went insane and fled with Meteion to Ktisis Hyperboreia. Venat, the Warrior, Emet-Selch and Hythlodaeus followed them and defeated Hermes. Meteion finished the report, and driven by their creator's question, concluded that life was suffering and despair, and it was in the best interest of everything living to surrender to inevitable death and despair, which they would bring as a "gift" to all of the lives on Etheirys. Hermes used the memory reconfiguration system Kairos to erase the memories of all those involved in the event, and allowed Meteion to escape. Venat gave chase with Argos, but could not catch her in time, and so placed a tracking spell on her. Thanks to Hythlodaeus and Emet-Selch, Venat and the Warrior escaped to safety with their memories intact.

Venat escorted the Warrior back to the portal that had brought them to Elpis, and determined that no one must learn about the Meteia, otherwise Etheirys would suffer what the other civilizations did even before the Meteia's song of oblivion would reach it. Yet she needed to gather supporters and formulate a plan. Before they parted ways, Venat encourages the Warrior to use the knowledge they gained in Elpis to help them in the future.

Upon traveling back to their own time, the Warrior had a vision of what eventually befell the Ancients' world. When the Final Days fell upon Etheirys, Venat gathered a group of Amaurotines who opposed the Convocation's decision to sacrifice more lives to the summoned primal Zodiark to revive their brethren, and offered herself to become the core of Hydaelyn, a primal that would bind Zodiark. As Hydaelyn, she ended up permanently splintering the world into the Source and its thirteen reflections.

So let there be no way back. From that temptation I sunder us. No more shall man have wings to bear him to paradise. Henceforth, he shall walk.

The reason the Warrior of Light could recognize Venat on sight in Elpis was that Hydaelyn had presented an image of her original self to the Warrior of Light as they were on a ship bound for Old Sharlayan. Aware of what the Warrior had learned about Venat and Hydaelyn's origins as a deity in the First, Hydaelyn bid them go forward even if She no longer had their faith.

In the Mothercrystal, when the Scions of the Seventh Dawn finally met with Hydaelyn, the Warrior had the option to call her "Venat", eliciting an emotional reaction from the goddess who cried, moved that the Warrior still remembered their time together in Elpis. After Hydaelyn challenged the party to test whether they had the power to save the universe, the defeated Venat finally returned to the aetherial sea.

Venat is a woman with long silvery white hair and bright blue eyes. Like the other Ancients of her time, she dons a half-mask. She wears white robes rather than dark ones, distinguishing her as an advisor who has stepped down from public office. As such, according to Hythlodaeus, these white robes mark her as a voice of reason and impartiality. Should Venat be pressed into battle, she typically wields a blue and white crystal Paladin sword.

Venat's personality reflects that of Hydaelyn, seeing as she is her heart. Venat is kind, wise, compassionate, and curious, dedicated to the well-being of the world and its inhabitants. Her decision to become Hydaelyn's heart was a conscious one, made by the ideals she held dear: for people to know suffering so that they could survive, grow and become stronger, so that they could resist the song of oblivion. It was ultimately her travels across the world, the memories she made, and above all the people she met that convinced her of the beauty of life and gave her the will and strength to oppose the regressive nostalgia of Zodiark's worshipers and the nihilistic fatalism of Meteion.

While Venat's decision has her witness the untold suffering she created, becoming increasingly weary and bloodied as she observes the tragedies wrought by her own hand, she continues to soldier on, hoping that one day she'll meet the Warrior of Light again and that they'll prove themselves strong enough to overcome Meteion and despair itself. Ultimately, her faith in mankind, and the Warrior of Light specifically, would be vindicated as they heeded her words, passed her trials and went on to defeat the Endsinger, allowing the people of Etheirys to create a new future. After passing on, she gave a heartfelt smile, proud that her friend had fulfilled their shared goal of saving the world.

Both Emet-Selch and Venat herself hint that she can be quite sentimental and mischievous, the latter trait also shared by her successor. When the Warrior of Light summoned him in Ultima Thule, Emet-Selch does refer to the possibility that this spell was a final joke that Venat played on him.

All-Rounder, able to fill tank, DPS, or healer role. As a tank, she resembles a

Paladin; as a DPS, she resembles a

Dancer; and as healer, she resembles a

White Mage. She wields the weapons of Divine Light.

Venat is also fought in a special instance duty, where she alternates between the aforementioned roles. When she performs a limit break, the three weapons of Divine Light will rotate around her, as if combining all her power in one.

Venat, as Hydaelyn, is fought within

The Mothercrystal trial, which is unique in that it is the only trial of Endwalker where the player has the option to use Trust party members. The extreme version of Venat as Hydaelyn can be fought within "The Minstrel's Ballad: Hydaelyn's Call", and her Divine Light weapons can be acquired as drops or by exchanging tokens.

Venat's personal theme is "Flow", playing during key scenes with or about her, including her final moments as Hydaelyn. An arranged version titled "Flow Together" plays during the duel in Elpis between her and the Warrior of Light.

"Answers" and its arrangements serve more specifically as Hydaelyn's themes.

Venat is named after the Occuria of the same name from Final Fantasy XII. Like the XII character, the XIV character is a rogue and heretic who defied the wishes of their race. 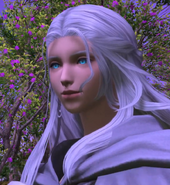