Final Fantasy Wiki
Register
Don't have an account?
Sign In
Advertisement
in: Weapons in the Compilation of Final Fantasy VII, Signature weapons, Guns

The Velvet Nightmare (ベルベット・ナイトメア, Berubetto Naitomea?) is a gunblade in Final Fantasy VII: Advent Children. The Velvet Nightmare is a handgun designed after two parallel swords, but with gun functionality only as stated in Yazoo's official profile; the blades make up the slide of the gun, and are thus near impossible to use to attack with. Like any metallic weapon, it can be used to block swords, and defends against Cloud Strife's Fusion Swords with ease. While a single Velvet Nightmare is Yazoo's primary weapon, Loz also possesses one as a back-up weapon and Yazoo sometimes acquires it to dual-wield the twin weapons.

During Cloud Strife's pursuit of Kadaj in Edge, Yazoo's Velvet Nightmare and Loz's Dual Hound gauntlet are destroyed by the Fusion Swords. Acquiring Loz's Velvet Nightmare, Yazoo drops this one after shooting Cloud through the chest following Sephiroth's defeat and Kadaj's return to the Lifestream; it is presumably destroyed by Yazoo and Loz's spell and the immediate explosion. 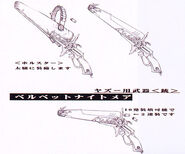 Concept art of the Velvet Nightmare. 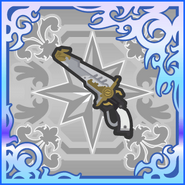 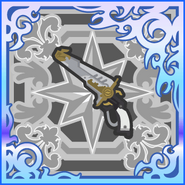 [view · edit · purge]A nightmare is an unpleasant dream that can cause a strong emotional response from the mind, typically fear or horror, but also despair, anxiety and sadness. The dream may contain situations of danger, discomfort, psychological or physical terror. Sufferers often awaken in a state of distress and may be unable to return to sleep for a prolonged period. The word derives from the Old English "mare", a mythological demon or goblin who torments others with frightening dreams.