Yuna: Shuyin!
Paine: It can't end like this.
Rikku: I'm getting ticked off!
Shuyin: Come, Vegnagun. Let us purge this repulsive world.

At the start of the battle

Vegnagun's Head is a boss in Final Fantasy X-2, and the fourth and final part of Vegnagun that must be destroyed. Once Vegnagun's head is destroyed, Shuyin confronts the party himself in a final battle.

"When Vegnagun's health drops, it uses Nemo-Ante-Mortem-Beatus, its most powerful ability."

The battle has a time limit, and when the time is up, Shuyin fires Vegnagun's cannon, destroying Spira and giving the player the bad ending. During the battle voices of Jecht, Braska, and Auron give their support to Yuna and her friends.

Destroying the Redoubts makes this battle much easier, as it prevents the Head from unleashing several of its more lethal attacks, but the Redoubts revive after a period of time.

It is good to dedicate one character to healing while the others focus on dealing damage, preferably with either Dark Knight's Black Sky or Darkness ability, the Gunner's Trigger Happy, or any multiple-hitting or full-party attacks. Mascot is also recommended due to its strong stats.

The Gunner equipped with Cat Nip can inflict multiple hits of 9,999 damage in the original version. Equipping the Gunner with a Speed Bracer gives her a permanent Haste. Cat Nip and the Speed Bracer can be obtained by defeating the Black Elemental on the 40th Cloister of Via Infinito. This strategy only works in the original versions, as in the International and HD Remaster versions Catnip gives Auto-Berserk.

Another strategy is to go through all of the gates in Megiddo Garment Grid (obtained by going through all of the routes to the Farplane) and spamming Ultima and Flare, with an Alchemist on standby for Ethers and mixing Mega-Potions (Potion and Hi-Potion). This can be made easier with a captured Dark Elemental whose One MP Cost allows it to use Ultima and Flare without the need for MP refills from Ethers. The Dark Elemental should be equipped with the Megiddo Garment Grid to be able to use Ultima. 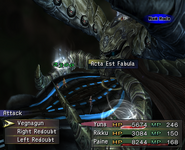 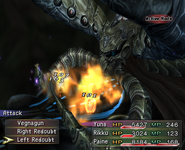 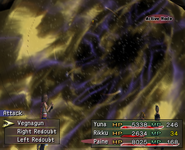 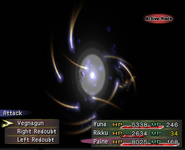 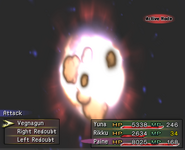 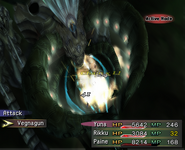 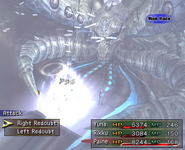 Pallida Mors
Add a photo to this gallery

Retrieved from "https://finalfantasy.fandom.com/wiki/Vegnagun_(head)?oldid=3282052"
Community content is available under CC-BY-SA unless otherwise noted.