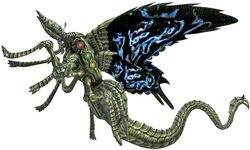 Vegnagun (ヴェグナガン, Vegunagan?) is a colossal weapon in Final Fantasy X-2. It is a powerful and fearsome machina created by the city of Bevelle during the Machina War, 1000 years before Final Fantasy X. The weapon is powerful enough to potentially destroy all of Spira. Despite being a machine, it has an organic appearance, its body resembling a locust. It can sense emotion, and thus knows whether an approaching person means to do it harm. Vegnagun was not put in use due to its inability to tell friend from foe; it was considered to be used against Sin, but due to its flaws was abandoned.

Vegnagun is controlled by playing an organ-like instrument atop its head, each key emitting a colored glow when pressed. Its main weapon, a gargantuan cannon, fires concentrated energy beam to cause untold amounts of destruction.

During the Machina War between Zanarkand and Bevelle, Shuyin attempted to save his beloved, Lenne—a summoner sent to the front lines—by infiltrating Bevelle's headquarters to hijack Vegnagun and decimate Bevelle's troops. Lenne discovered Shuyin's scheme and rushed to stop him from activating the weapon. The pair was caught before Shuyin's plan could be actualized, and the guards shot the lovers. While Lenne's memories coalesced into the Songstress dressphere, Shuyin's anger and grief along with his despair lived on past his death.

A thousand years later, Vegnagun still resided as a forgotten secret among the lower caverns of Bevelle Underground. Shuyin's lingering hatred residing in the Den of Woe possessed the Crimson Squad members when they entered the den. The squad members killed each other all but for four who escaped, but unbeknown to them, one of them–Nooj–carried Shuyin's spirit inside of him. Shuyin attempted to activate Vegnagun via Nooj's body, but when the conflicted Nooj tried to approach the weapon, it fled to the Farplane.

With Vegnagun situated at the heart of the Farplane the machina could absorb untold amounts of energy, the same energy that Shinra describes that if tapped into, would power countless cities of light. Vegnagun would thus be able to absorb enough power to become capable of omnicide. Shuyin abandons Nooj's body for Baralai's who is easier for him to control, and takes Baralai to the Farplane to activate Vegnagun. With the combined teamwork of the Gullwings, Leblanc Syndicate, Nooj, and Gippal, Vegnagun is dismantled piece by piece. Yuna, Rikku and Paine defeat Shuyin himself and fades after reuniting with Lenne's spirit.

As revealed in Final Fantasy X-2 Ultimania, after he left the Gullwings to work for Rin, Shinra received financial support from his new employer to prove his hypothesis on an untapped energy source by modifying Vegnagun to harness the Farplane's energy.[1]

The battle against Vegnagun is a multi-stage affair, with YRP fighting their way towards the control center where Shuyin commands the titanic machina. The party must disable Vegnagun's tail, leg, core, and main cannon before Shuyin will confront the girls personally.

Defeating the entirety of Vegnagun in the Final Fantasy X-2 HD Remaster version earns the trophy/achievement Machine of War.

Battles against Vegnagun's parts have a different battle opening than the rest of the game; instead of the screen shattering and the view switching to battle mode, Vegnagun's battles open with a black hole sucking in the screen.

"The Colossus" from Final Fantasy X-2

The theme of Vegnagun is "Great Existence" (大いなる存在, Oori Naru Sonzai?), called "The Colossus" in Luca sphere theater and iTunes. It plays when viewing the spheres of Vegnagun.

Vegnagun's body in the Farplane appears as a battle background in a Battle Music Sequence. 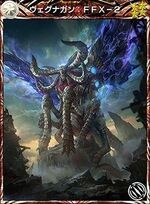 Vegnagun's design, particularly its moth-like wings on a locust body, refer to a popular design of the Judeo-Christian demon Beelzebub (one name also used for the Devil), referred to as Lord of Flies, taking the form of a demonic fly or locust.

Vegnagun is implied to have been at Lake Macalania in the mission "Secure the Agency!", as one of the near-dead Al Bhed inside the travel agency says Fryd fyc ed? Dryd rika cryba, taab fedreh dra myga. E fiend... machina?, which translates to "What was it? That huge shape, deep within the lake. A fiend... machina?"

Tidus and Yuna in front of the Vegnagun. 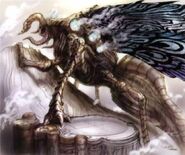 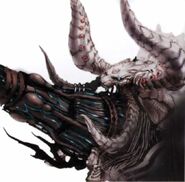 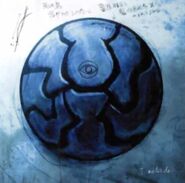 Both aspects of Vegnagun's name may be Scandinavian in origin: Vegna translates to "because of" from Icelandic, and the common word gun is thought to derive from Old Norse from either the names Gunnr or Gunnhilde, names of Valkyries, both meaning "war". Therefore, Vegnagun's name directly translates into "because of the War"; the Machina War is the origin of its creation. It also likely alludes to Vegnagun's appearance as a colossal cannon.

The names of many of Vegnagun's attacks are in Latin. Its most powerful attack, Nemo Ante Mortem Beatus, translates to "no one is happy before their death".