watch 01:28
'Dissidia Final Fantasy NT': Vayne Character Reveal
Do you like this video?

Relm: I couldn't miss the chance to practice my drawing!
This article is in need of a few pictures. Perhaps you can help by uploading a picture of Vayne's fighting abilities.

Elijah Alexander
Vayne Carudas Solidor is a playable character in Dissidia Final Fantasy NT and its arcade version. He is the third character and second villain to represent Final Fantasy XII. He is a Vanguard type, and his EX Skill is Prime Conqueror.

Vayne's default costume, "Imperial Consul", is identical to his appearance in Final Fantasy XII. He wears a dark green pullover and pants, beneath a sleeveless green armor, adorned with white gloves, black boots with gold knee-pads, gold belt, and white-and-gold winged armlets. Vayne's cloak is dark blue, crimson, and white. In the first alternate coloration, Vayne's armor is gold with black pullover beneath, his belt and knee-pads are silver, with gray gloves, silver-and-gray winged armlets, and a cloak with silver, gray, and blue. In the second alternate coloration, Vayne's armor is black with white pullover underneath, his boots are white with black knee-pads and belt, pale-blue gloves and blue-and-black winged armlets, and his cloak is white, pale-blue, and purple.

Novus III
Add a photo to this gallery

In contrast to his defiance of the gods of Ivalice, Vayne respects both Materia and Spiritus, stating that as pawns, they must help them maintain World B. He maintains his respectful and polite personality.

Vayne's weapons are Mist infused greatswords. Though Vayne fights primarily as a monk, the swords are incorporated in both his Bravery and HP attacks.

His default weapons are Sephira, first wielded by Vayne in his Novus form in Final Fantasy XII, which function as his changeable weapons in the Dissidia series. His first alternate weapons are known as Corruption, while his second are Enigma, and his third are Recompense. 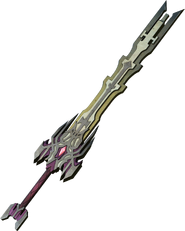 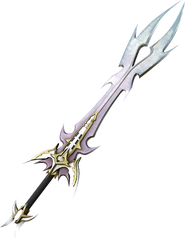 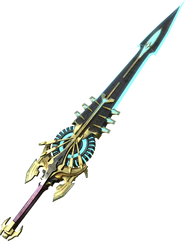 Recompense
Add a photo to this gallery

Like many other characters, it is unknown if Vayne had participated in the previous cycles. He, Kam'lanaut, and Snow Villiers were absent when Spiritus summoned his champions to his tower to confront Materia.

Vayne encounters the Warrior of Light, Cecil, and Noctis in Porta Decumana and questions how much they value their freedom and to what level they are willing to fight for it. He spars with the trio to generate energy to maintain the world. After he is defeated, he asks Noctis why he fights. The latter responds that he fights to take back something important that someone took from him. Afterwards, the trio leaves the area to continue traveling to Spiritus's domain while Vayne stays behind.

Shortly after Shinryu's defeat, the moogles give Vayne a crystal to host his memories for Spiritus to use in the upcoming infinitely long war. With a crystal doppelgänger of himself to serve on Spiritus's behalf, Vayne returns to his home world.

Vayne is one of the more unique Vanguards of the cast, able to knock his opponents in whatever direction he chooses on the third input of his Bravery chains while retaining his iconic martial arts fighting style. This allows him to take advantage of his surroundings to perform intricate team-based followups, as well as being able to wall-rush from a variety of positions near nearly any wall. To compensate one of his biggest downsides is that his damage output is overall one of the smallest as well as needing to play up-close often.

His EX Skill can grant extended buffs to any allies within a certain range, but to make full use of them, Vayne must charge up his EX Skill for a number of seconds, making him a sitting duck to any incoming attacks.

Both of Vayne's voice actors from Final Fantasy XII reprise their role; Nobuo Tobita in the Japanese version, and Elijah Alexander in the English version. 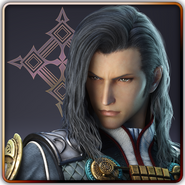 PSN Render Icon.
Add a photo to this gallery