Ivalice will know a new Dynast-King, and Man will keep his own history! The tyranny of the gods is ended! We are their puppets no more! The freedom for which we have longed is at hand!

Vayne Carudas Solidor is the main antagonist of Final Fantasy XII. At 27 years old, he is the third son of Archadia's Emperor, Lord Gramis, the elder brother of Larsa Ferrinas Solidor, and part of House Solidor. He arrives in Rabanastre as its new imperial consul, but has far greater plans than simply ruling Dalmasca. He is a refined yet ruthless statesman who on the surface works for the betterment of his nation, but under the surface desires glory and stops at nothing to attain it. 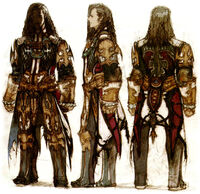 Vayne has blue eyes and shoulder-length black hair. He wears a dark-green pullover and pants, white gloves, a sleeveless armor with white-and-gold armlets with wings on shoulders and gold knee-pads. His cape is dark blue and he wears a gold belt. As Vayne Novus, most of his clothing dissolves leaving his armored gauntlets, boots and belt behind, while his body becomes more muscular and his face distorted. As The Undying metal is grafted onto his legs and torso, primarily on the left side. His left arm is covered by a cannon, while his right arm is a sword. He bears an assembly of swings and a crest over his head in the shape of a dragon's head, alluding to the Undying as being formed from the metal of the Sky Fortress Bahamut named after the recurring dragon summon in the Final Fantasy series.

I will stand fast. I will endure your hatred, suffer your slings and arrows. I will defend Dalmasca! Here I will pay my debt! I swear it now! Though King Raminas and Lady Ashe be gone, they stand ever at the side of their people. In honoring peace...you do honor to their memory, and to Dalmasca. What I ask, I ask plain. My hopes now rest with you.

Part of Vayne's speech during his introduction as Rabanastre's consul

Driven by the desire to become a new Dynast King, Vayne is lauded by friend and foe alike as a devious politician, skillful leader and administrator, as well as a military genius. Vayne is ruthless, manipulative, and obsessed with power. He allows no distractions or obstacles to his goals, removing them by whatever means needed. Vayne is not a brute however, and is intelligent and pragmatic in his pursuits, recognizing the value of political pawns he can hold over others by keeping enemies alive or manipulating their actions. Vayne values the legacy and stability of Archadia and House Solidor and will use any means to safeguard them. Though having executed two of his brothers for treason, Vayne holds a soft spot for his younger brother, Larsa.

Your lives are forfeit, and your insurgence with them. Dalmasca will again know order. For good and all, I shall bring your futile attempts at rebellion to an end.

Vayne had two older brothers whom were branded traitors and killed by Vayne at the request of his father, most likely because he believed they were planning an uprising. Vayne has sworn to protect his younger brother, the innocent Larsa.

While it is unknown when Vayne first met Venat and Dr. Cid and began conspiring with them to "put the reins of history back in the hands of Man", it is known that he masterminded the invasions of Nabradia and Dalmasca to gain the Dusk and Midlight Shards, two pieces of deifacted nethicite critical for Cid's research at Draklor Laboratory. Vayne used the uprising of the Neo-Rozarria Faction in Nabradia as a pretext for invasion with the excuse of restoring peace and order to the country.

After the Dalmascan counterattack at Nalbina Fortress, Vayne concocted the plot to fool the people of Dalmasca into thinking that Captain Basch fon Ronsenburg was a traitor and responsible for killing their King, Raminas B'nargin Dalmasca. Using Basch's twin brother, Gabranth, who works for Archadia, the two played out a scenario in front of a wounded Dalmascan soldier, Reks, who would serve as a witness.

Two years later, Vayne is appointed Consul of Rabanastre, making him the de facto ruler of Dalmasca. He delivers a speech to a skeptical crowd gaining their reluctant acceptance, and organizes a fete at the former Royal Palace of Rabanastre as a trap for the Resistance that storms the palace only to find soldiers and an Imperial battleship Ifrit waiting. As Vayne corners Princess Ashe, a member of the Resistance, he has her taken away to Judge Ghis's care on Dreadnought Leviathan while the sky pirates and a street thief named Vaan who were with her are sent off to the Nalbina Dungeons.

In the manga version, Vaan runs into Vayne on the palace grounds overseeing the battle between Resistance and Imperial forces. Vayne invites him to strike him when Vaan yells at him for the death of his brother, Reks. When Vaan lunges at Vayne Gabranth blocks his attack and Vayne orders Vaan executed for having attacked an Archadian official. The sky pirates Balthier and Fran save him. Later on, Vayne and Gabranth loot the palace treasury looking for the Dusk Shard, unaware it had been stolen by Vaan. Later still, when Ashe has acquired the Dawn Shard and Vossler's betrayal has the group captured by Ghis, Gabranth notifies Vayne, who in turn tells the Occurian Venat they now have all three shards.

Despite much pomp and ceremony, Vayne's tenure as Consul is short-lived. The Imperial Senate, favoring Larsa as a puppet Emperor over his ambitious and ruthless older brother, recalls Vayne to Archades. When Vayne confronts Emperor Gramis on this decision, his father explains Archadia is moving in the wrong direction, and that only Larsa can put them on the right path. Vayne reminds the Emperor that Archadia's power was built on military might over peaceful negotiation, a fact Gramis acknowledges, but declines to comment on further. Vayne states that ruthlessness at this point would be necessary, both to ensure that House Solidor retains power and remains sovereign, and that his brother Larsa would be protected from the schemes of the Imperial Senate. Gramis appears to have little power over the Senate at this point.

Shortly afterwards Gramis is found dead in the throne room, supposedly poisoned by Chairman Gregoroth who has committed suicide. Vayne has the senators arrested for supposed regicide, and "temporarily" dissolves the Imperial Senate. Knowing that Judge Bergan would support him out of loyalty and Judge Zargabaath to avoid internal strife, Vayne begins acting as the new Emperor of Archadia. Judge Drace sees through the façade and attempts to arrest Vayne. Despite pleas of mercy from Zargabaath, Vayne tries Drace for high treason, and Bergan, happy to serve his ruthless new Emperor, strikes her down. Knowing that Judge Gabranth personally reported to Gramis on Vayne's schemes, the latter tests the "hound's" loyalty and orders Gabranth, a dear friend of Drace, to administer the killing blow, which he delivers reluctantly.

Vayne proceeds with his plan of becoming Ivalice's new Dynast King and putting history's reins back into the hands of man and out of the Occuria's, mysterious otherworldly beings that deem themselves the Gods of Ivalice. He sends Dr. Cid to the Pharos where he uses the Sun-Cryst, the motherlode of nethicite in Ivalice, to spill forth Mist over the world. The unleashed Mist powers up Vayne's new Sky Fortress Bahamut, the largest aerial battleship ever built. The Sky Fortress plays a central role in the Battle above Rabanastre, during which Vayne plans to obliterate the Resistance forces led by Marquis Ondore and have the city of Rabanastre follow on the battle.

Princess Ashe's party infiltrates the fortress and confronts Vayne with Larsa's aid. He is defeated, but by using the power of manufacted nethicite that had knocked Larsa out, Vayne transforms into Vayne Novus. Judge Gabranth turns on his former master upon witnessing him harming Larsa, and when Vayne is weakened, Gabranth plunges his sword into Vayne's chest. Vayne retaliates but Larsa stops him. While Vayne is still shocked by Larsa's actions, Vaan wounds Vayne.

Escaping to the deck of the cannon superstructure Vayne can't help but laugh at his current state. The rogue Occurian Venat offers comfort, saying they had succeeded in releasing the control of history from the hands of the Occuria as the Sun-Cryst was destroyed, giving Vayne its power as a way of thanks. Vayne uses his newly-gained power to fuse parts of Bahamut unto his body to become a mechanical dragon, but he is still defeated and explodes into a cloud of Mist taking Venat to the grave with him.

The party fights Vayne onboard the Sky Fortress Bahamut. Larsa assists the player's party during the first battle. Vayne bears no weapon at first, instead opting to use his fists in the same style as a Monk would. In the second battle, Gabranth will assist the party. Some of Vayne's attacks resemble Basch's Quickenings. During the first battle, Vayne uses a cinematic attack that has him use a series of punches that "crack" the screen, similar to Ruin Impendent, and one of Vayne Novus's attacks is to command the five Sephira to glow and impale an opponent, similar to Flame Purge. Vayne Novus also resembles Romeo Guildenstern's initial boss-form in Vagrant Story: both lack a shirt, have altered skin tone and are golden and use sacred objects as weaponry (Guildenstern's sword being shaped like the Rood of Iocus, and Vayne's Sephira by their name and appearance being associated with the sacred). While this can be attributed to sharing a character designer, the two also have similar goals of restructuring a world they see as irreparably flawed, although their motivations differ.

Vayne's sprite is unlocked in the Sky Pirate's Den after using Technicks over 100 times, earning the player the title of Premier Prestidigitator.

Vayne's first battle is fought to "The Theme of the Empire," which can also be considered his personal character theme. The song "Upheaval" plays when fighting his Vayne Novus form, and as The Undying, he is accompanied by "The Battle for Freedom."

Vayne has made appearances in the following works in the Final Fantasy series:

Vayne is the twelfth Emperor of Archadian Empire. This is one of the numerous allusions to the number twelve in Final Fantasy XII.

Vayne is voiced by Nobuo Tobita in the Japanese version.

He is voiced by Elijah Alexander in the English release. Final Fantasy XII was Alexander's first experience with a video game. He has described the experience of seeing the animated action and lending his voice to enhancing the life of the character as fun. His preparation for the role was similar to playing a role on TV, film or theater. He was instructed to speak with Received Pronunciation, a dialect he was familiar with at the time. Vayne, as a ruling class aristocrat, had to have his arrogance, sense of invincibility, cruelty and nonchalance pronounced with an effortless quality that expressed a sense of confidence and pride.[2]

Alexander was brought in to audition by his voiceover agency. The audition took about 45 minutes as he auditioned for about nine different characters in a variety of voices. He was cast as Vayne based on his audition, and Alexander was thrilled to be "the guy to beat" in such a popular game. He did around four recording sessions for the part.[2]

Promotional art of the Solidor brothers.

Vayne in his office. 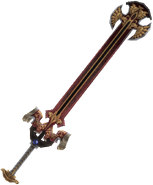 Vayne as The Undying.

Vayne in the manga.
Add a photo to this gallery