Are you so determined to die? One last chance, villains: bow down and acknowledge your king. Your god!

Vauthry, about to battle the Warrior of Darkness

Vauthry is a non-player character in Final Fantasy XIV and serves as the secondary antagonist of Final Fantasy XIV: Shadowbringers. He is the mayor of the city of Eulmore, letting his people live in luxury and bliss before the world comes to an end.

Following Minfilia Warde's preventing Norvrandt from being consumed in the Flood of Light, Emet-Selch enacts a contingency plan for the Eighth Umbral Calamity to occur. He appears before the mayor of Eulmore, taking advantage of the man's desire to keep his position indefinitely by talking him into having his unborn son be infused with the essence of a Lightwarden. Due to his innate ability to render sin eaters docile, Vauthry is thus instilled with a god complex by his father as he eventually succeeds him as the ruler of Eulmore. Vauthry uses his status to feed the citizens meol leftovers secretly made from sin eater flesh to extend his ability.

Vauthry encounters the Warrior of Light and Alphinaud Leveilleur while punishing Kai-Shirr for entering Eulmore under false pretenses. The two get the Mystel out the city while making a powerful enemy. When Vauthry learns the Warrior and the Scions of the Seventh Dawn are killing the other Lightwardens, he declares war on them and those who seek to support them. The battle is taken to Eulmore, Vauthry having the citizens attack them. Once Eulmore is taken from him, Vauthry's existence as a Lightwarden is exposed as he decides to create a new paradise on Mt. Gulg, levitating the mountain so he could not be reached.

The Warrior of Light and the Scions enlist the aid of their First Shard friends to control a Talos to reach Vauthry while fighting through his sin eater army. During the final battle Vauthry throws a temper tantrum that awakens his full power and he transforms into the Lightwarden Innocence. He is defeated and dissolves into light while expressing sadness and disbelief over his loss.

Vauthry is a morbidly obese pale-skinned man who towers above every other citizen in his city. He has long blond hair and blue eyes. A second face can be seen on his chest beneath his black and purple gold-accented robes. He wears numerous gold rings.

During his initial transformation into a full sin eater, Vauthry develops tiny wings on his back that are nonetheless capable of supporting his weight. Upon transforming fully into Innocence, his appearance drastically changes into a slim beautiful figure adorned in purple robes, longer flowing hair and a pair of large golden, metallic wings.

Vauthry sees his authority as divinely ordained and those who oppose him as villains. He lacks empathy for others and throws temper tantrums when he doesn't get his way. Vauthry's outlook and god complex stem from his upbringing: being convinced that he is a sainted bridge between man and sin eater, while unable to do any wrong despite his amoral actions. He has a misanthropic view of his subjects, the world, and the people under the domain as he believes they would inevitably destroy themselves and cause only suffering without his despotic rule in what he deems as a hopelessly broken land, and that his power to control the sin eaters grants him the right to act as he pleases.

Vauthry is the only Lightwarden capable of decisive thought and strategy, unlike the other Lightwardens encountered who only possess the most basic of instinct. This trait makes him the most powerful of the Lightwardens and by extension of sin eaters, being able to coordinate them to his will and using them to justify his sense of supremacy.

Main article: The Crown of the Immaculate

Vauthry, as Innocence, is fought as the boss of trial

The Crown of the Immaculate.

The Crown of the Immaculate (Extreme). This fight skips Innocence's human form.

With his portly body, sporting a long blonde tuft of hair on his otherwise bald head, and the inclusion of the Beehive club in Eulmore, Vauthry is most likely an allusion to Don Corneo. This connection is furthered in the Japanese version, being known as Don Vauthry (ドン・ヴァウスリー, Don Vausurī?). 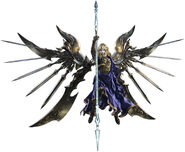