If it's an introduction you want, all you need to do is to ask. I am Vata of the Wind, hand of Avalonian Empire.

Vata to the Warriors of Light

Mercenaries aren't often bound to a higher calling, but Vata is the exception that prove the rule. Brash and unpredictable, he excels at guerrilla warfare.

Vata is one of the Four Generals in Final Fantasy Dimensions.

Vata is an older man with short tan hair. He wears a long, green and white kimono-like coat with a high-collar and is shirtless underneath. He has white gloves, long brown pants and brown shoes. He has dark gray shoulder- and knee pads.

Vata appears as a careless and aloof antagonist, often stating he is like the wind and no one can tell him anything, much to the dismay of Cid and the heroes alike. As time goes on, he aids the heroes and tells them to use their brains over hot heads, much to Sol's annoyance.

Vata hails from a village destroyed by the Avalon Empire whose soldiers raided it for a crystal. The sole survivor, Vata joined the army to rise up to a position to exact revenge on the Emperor. With such a chance out of his grasp as he could not be promoted beyond his current rank, Vata lost hope in his village being avenged until he met Sol and his friends when they help Barbara rescue her dragon Ceres. Though he obtains the fragment of Deist's crystal, Vata falls back without obtaining the rest.

He later confronts Sol and his party, guarding the elevator to the Heliogabalus. He flees after a fight and seeing that they have Argy on their side. He appears again on Mt Wells, where he warns them of the coming of the four Divine Generals before fleeing.

The party once again encounters Vata on the Heliogabalus after it attacks Mysidia. He appears to be defeated but reappears before the Heliogabalus goes down and helps the party escape by showing them that they can jump to Lugae's ship as dragoons. He reveals he is the one who helped them by destroying the engine before teleporting away.

After the worlds of Light and Darkness merge, Vata appears before the party in Mysidia to tell them that the Emperor is harvesting dark matter and that the other generals have been resurrected in corrupted forms. Later, in Castle Avalon, he tells the party of Imperio and Gehenna, the two remaining Divine Generals, before once more departing.

He issues another warning to the party in The Void, where he tells them someone will make the ultimate sacrifice if they continue further. When asked if he's an enemy or ally, he responds that he's certainly "someone's" enemy. When the world is about to be engulfed by the Dark Flow, Vata sacrifices himself by merging with it, giving it a form that can be destroyed. As the party is forced to kill him he tells them of his past. When Alba and Dusk were holding off the Forces of Nil after Chaos Elgo's defeat, he appears as spirit alongside with The Mask and King Freyr and teleported the twins back to Glaive.

Vata fights the party a total of five times, the first four in his usual form and the last as Nil Vata. 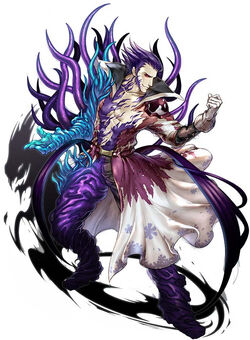 Vata appears as a wind-elemental summon. His special attack is Buffet, which deals wind-elemental damage to all enemies and lowers their speed for three turns.

Vata allows the wielder to use the following abilities: 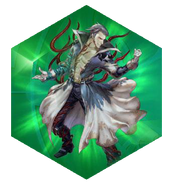 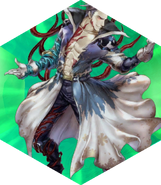 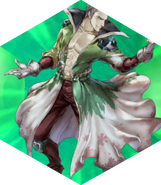 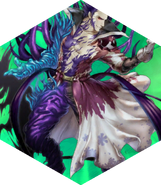 Vata appears with a wind-elemental card.

Vata is another name for Vayu, a primary Hindu deity, the Lord of the winds, the father of Bhima and the spiritual father of Lord Hanuman.