July 27 - August 9, 2018
Vanquish Jie Revorse! is a raid event in Final Fantasy Brave Exvius. The event is a collaboration with the Star Ocean franchise, commemorating the Global release of Star Ocean -anamnesis-. As the name suggests players face Jie Revorse, the antagonist of the first Star Ocean game, as a boss.

It has a companion challenge event, Defeat Jie Revorse - GOD, to be released during the event's second week.

As with all raids, Vanquish Jie Revorse! requires the collaborative effort of all players of the game. Jie Revorse's HP is tremendously high and it is up to the players to slowly drain it until the event's end, not to defeat the boss but to earn points and materials: defeating Jie Revorse rewards each player with an amount of

Jie Revorse raid coins, the number of which depends in the damage dealt and the current Level Bonus (which in turn, is determined by Jie Revorse's global Level and will go down should the players not continually deplete its current global HP bar before the timer reaches 0:00:00). These raid coins can be used to summon in a related Raid Summon banner, located under the Standard Summon tab.

The event also features a time-limited Rare Summon banner with featured units from Star Ocean series, which appear in Star Ocean -anamnesis- and are the protagonists of their series' main entries: Roddick Farrence from Star Ocean, and its remake; Rena Lanford, deuteragonist of the second installment, The Second Story and its remake; Fayt Leingod, protagonist of the third game Till the End of Time, and Fidel Camuze from the fifth game, Integrity and Faithlessness. Reimi Saionji (deuteragonist of the fourth installment, The Last Hope) can be acquired via Raid Summons.

The event has a major bug which causes chain damage on the Raid Boss to not be calculated for score. As such using powerful one strike units is the best course of action. As compensation, the threshold for rewards has been lowered and 10,000 Raid Coins will be given daily to all players.

Players can check their progress and ranking by clicking on the "Achievement Status" button. While all rewards are sent to the player's mailbox, only individual rewards can be collected as soon as the player gets enough points. Rank rewards are distributed once the event is finished.

Within the event period, players can use the Raid Summon banner by spending raid coins. Each summon costs 100

. Through this method, the player can obtain Magicites and Megacites of all colors, exclusive units and materials, and the ultra-rare 4★+ Guaranteed Tickets and non-specific Trust Moogles (1%, 5% or 10% ALL).

The featured Star Ocean units can be fused with the summonable Trust Moogles that serve as 5% enhancers for their respective Trust Master meters: Rena's Knuckles of Hope, Fayt's Farwell, Roddick's Millie's Charm, Fidel's Fortitude and Vigor and Reimi's Seed of Hope.

Recipes and crafting materials will come from both the individual rewards and from raid summoning. While most of the gear can be crafted multiple times, there is one exception (Fierce Bow) which requires the Philosopher's Stone and, as such, is limited to one per player.

Jie Revorse is not an overly powerful opponent. It relies mostly on physical attacks although it can also use magic attacks as well though these are mostly seen when its HP decreases.

It has a -50% weakness to Lightning, is immune to all status ailments and vulnerable to all stat breaks.

Jie Revorse is not too difficult to beat, if one exploits his Lightning weakness and Machine Killer, he can be defeated easily. A Physical Cover Tank should be sufficient to keep the party alive if the player needs defenses. As stated beforehand, the Raid is bugged and chain damage isn't counted, so it is recommended to use single strike finishers to beat Jie Revorse quickly. Olive is by far the best choice due to Sparky being Lightning elemental, having a powerful move on True Shot and being strong against Machines herself, otherwise finishers like Cloud, Dragonlord or Blossom Sage Sakura are helpful too, although currently there is not Magic version of Magic Killer so it may be preferable to use physical damage.

The raid's boss theme is "Dream and Reality". It is the tenth track in Disc 2 of the Star Ocean: First Departure Original Soundtrack, which was composed by Motoi Sakuraba. 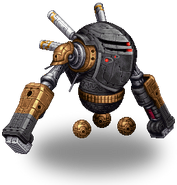