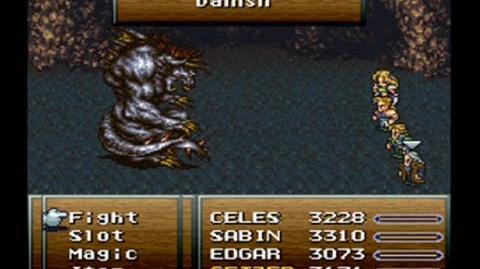 The Vanish-Doom bug is a bug in the early versions of Final Fantasy VI.

Since the effects of the invisible status leave units open to any magic attack, it overrides certain important checks, such as death immunity, which is usually dealt with differently from other status immunities. As a result, casting Death on targets with the invisible status always defeats them, including bosses. Due to the undeads' special revival from Death and enemy Roulette, other attacks that do not use the Stamina statistic must be used against them instead, such as the Banish spell and the Bushido Oblivion.

A related bug linked to the presence of HP-regenerative and degenerative statuses in party members allows enemies to perform their final attack no matter if Banish, Snare, or others of their ilk are used for the finishing blow, with the useful exception of Snare done via the Mu (a.k.a. Rhodox) Rage. This bug was never fixed and is often the cause of player woes related to farming Magic Points from Intangir until they discover they can use the Mu Rage to avoid Intangir's counterattack.

The PlayStation version makes a poor attempt to guard an important World of Ruin storyline boss, Phunbaba, from the bug. The result is a fix that causes only the Vanish spell to miss. The attempt is not only in vain, as persistent players can still use Rippler to inflict Invisible status to exploit the bug, but it also causes Vanish to miss any party members in the third and fourth character slots due to an oversight relating to how the game's targeting system works. Vanish registering a Miss message as a result of the "fix" is in itself a bug; it is supposed to simply not do anything to the target when it fails.

The Vanish-Doom bug has been partially fixed for the Final Fantasy VI Advance release (and future releases); a character afflicted with Invisible will no longer lose immunity to Death, but other checks are still not made. The most prominent example of this is the ability to cast Raise or Arise on a living character while they are Invisible, restoring part or all of their HP.

There is a bugfix patch that players can use to fix the main Vanish-Doom bug (but not the related bug) on the SNES version.