Detects by Sound
Detects Low HP
List of Vampyr Enemies
Vampyrs are undead creatures shrouded in mystery in Final Fantasy XI. They are demon-like in appearance, but do not exhibit the same attacking traits as The Dark Kindred. Rather, Vampyrs are even more dangerous, with the ability to charm entire parties or doom their prey. In present-day Vana'diel, Vampyrs are located in secluded sections of the Near East, but others were known to work for the Shadow Lord in the past. 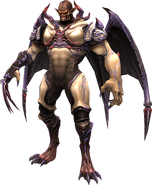 Vampyr is German for "vampire". [view · edit · purge]Vampires are mythological or folkloric beings who subsist by feeding on the life essence, generally in the form of blood, of living creatures. Although vampiric entities have been recorded in many cultures, and may go back to "prehistoric times", the term vampire was not popularized until the early 18th century.