Feast on the target's blood to restore HP.

Vampire (吸血 or きゅうけつ, Kyūketsu?, lit. Bloodsucking) and Absorb (吸収, Kyūshū?, lit. Absorption) are similar abilities whose difference is that the former often inflicts Sap to the target. These two abilities also resemble the Drain spell as they both drain the target's HP.

Bloodfeast is used by Cave Bat, Blood Bats, Vampire Bat, and Vampiress. It drains the target's HP and inflicts Sap

Absorb is an ability used by Black Knight which restores HP equal to 1/3 of the user's current HP.

Bloodfeast is an enemy ability used by the Blood Bats, Vampiress, and Blood Eye. It drains the target's HP and keeps doing it afterward. Calca can use the ability Bloodfeast with his Jive command.

Absorbs HP from one enemy.

Vampire (Red Feast in Anthology) is a Blue Magic spell that costs 2 MP to cast. It acts as a mix between Drain and ????. The formula for how much damage Vampire deals is:

In the GBA version, Vampire will attempt to drain all missing HP instead of just half. In the iOS/Android/Steam versions, the spell always fails against Heavy targets, which include most bosses.

Vampire can be used without having to obtain the spell by catching and then releasing a Steel Bat, Blood Slime, Dark Aspic, Mercury Bat, or Shadow.

Leech (Raid in previous releases) is used by several monsters, which is no different in visual effect than the Drain black magic spell the party can use. Its Spell Power is 40 and its Hit Rate is 100, and the damage is inverted if the target is Undead. It cost 20 MP for the enemy to use. Mandrake, Figaro Lizard, Hidon, Apparition, and Crawler.

Blood Feast (Red Feast in previous versions) is the special attack of Number 128. It is a low-powered physical attacks that deals damage to one target and heal the user's HP.

The enemy ability Absorb is a physical attack used by Twin Brain and Chekhov that inflicts damage to its target, which its user then receives back in HP.

Blood Suck is used by Black Bat, Evilhead, and Rilfsak. It deals minor non-elemental damage and drains HP from the target.

Vampire is an enemy ability used by the Grat and the Glacial Eye, which deals and absorbs a small amount of HP. The ability Absorb is learned through the GFs Pandemona and Doomtrain, and is a command ability usable by the party. It provides the same effect as the spell Drain, albeit roughly half as powerful, but is not affected by Shell or Reflect.

Absorb is an enemy ability used by Hecteyes, Prison Cage, Seeker Bat, and Malboro. The abilities Absorb More and Absorb Even More are used exclusively by Seeker Bat.

Absorb is an enemy ability used solely by Yunalesca in her first form. It drains an amount of health equal to half of a target's maximum HP and restores her own HP.

Absorb is an enemy ability that many enemies uses in the Fiend Arena in the International and HD Remaster versions, as well as Vegnagun (leg), Baralai, and Black Elemental. It absorbs 3/16 of a target's remaining HP and MP.

Blood Drain is a Blue Mage skill learned from Giant Bats. It Drains an enemy's HP for 10 MP. It is ineffective against undead enemies. It costs 2 Blue Magic Points to set. When set, it grants HP -5 and MP +5. It takes 4 seconds to cast and can be recast every 90 seconds.

Blood Drain is also an enemy ability used by the Giant Bat family.

Leech is a melee type ability that deals light non-elemental damage and drains the target's HP. It is used by Vampyr.

Vampire (Blood Suck on the PS) can be used by Messam Elmdore, the undead form of Zalbaag Beoulve, and Vampire Cat when an ally with the Beastmaster ability is standing next to it. The ability has a 100% hit rate, and will drain 25% of a target's HP. It has a 25% chance of inflicting the Vampire status effect.

Vampire is an enemy ability used by the Bloody Orb enemy, which deals non-elemental damage to a target and absorbs HP.

Absorb is a magical attack that has 15 uses, it also increases a Robot's HP by 9. The damage formula for Absorb is the user's Mana x6. It absorbs 25% of the damage, but cannot absorb from Para protected enemies. This attack can be used by Cicada, DarkRose, Gloom, Kusanagi, Madame, Moaner, Mosquito, and Swallow.

Absorb is an ability that drains the HP from a single enemy and adds it to its own. The ability can be used by Gargoyle and Liz King. Character's who have transformed into these monsters will have access to this ability.

Bloodfeast is an enemy ability used by the Blood Bat and Vampire Bat enemies. The ability deals non-elemental damage to a target and absorbs their HP.

Bloodfeast is an enemy ability used by Steel Bats and Blood Bats. It deals damage to a target and absorbs the damage dealt as HP.

Steal HP from enemies. You will take less damage while attacking.

Leech is an active ability that uses dark power to absorb HP from a single target for 3 AP. It can be used by Werebat.

It is also an enemy ability used by Werebat and Vampire Prime.

Blood Thirst is a Vampirism ability learned by Vampires at job level 3. It allows the character to absorb from one target an amount of HP equal to the damage dealt by a normal attack.

Bloodfeast in Final Fantasy IV: The After Years (Wii).

Bloodfeast in Final Fantasy IV: The After Years (PSP). 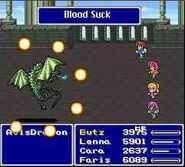 Vampire in Final Fantasy Tactics A2: Grimoire of the Rift.

Bloodfeast in Final Fantasy: The 4 Heroes of Light.

This gallery is incomplete and requires Leech in Final Fantasy XII added. You can help the Final Fantasy Wiki by uploading images.