The Vampire is an enemy in Final Fantasy XIII. Despite its high HP, it is easily beaten simply by using any elemental magic. There are two different colored versions of the Vampire; the ones in Taejin's Tower are purple and brown, whereas the ones in Oerba are green and gray. 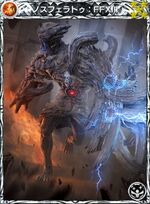 [view · edit · purge]The name "Nosferatu" has been presented as possibly an archaic Romanian word, synonymous with "vampire". However, it was largely popularized in the late 19th and early 20th centuries by Western fiction such as Dracula, and the film Nosferatu. A few of the many suggested etymologies of the term are that it is derived from the Romanian Nesuferitu ("the insufferable/repugnant one") or Necuratu ("the unclean one, spiritus immundus"), terms typically used in vernacular Romanian to designate Satan (the Devil).