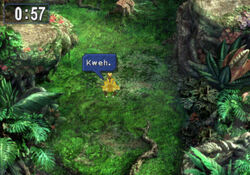 Vamo'alla flamenco is a depiction of Vamos allá, Flamenco, a Spanish expression meaning freely "Let's go, Flamenco". A common idiom in southern Spain, the title may refer to the tune's "Spanish" feel. The guitar in this type of music is called a Flamenco Guitar or Guitarra Flamenca, and guitarist at these dance parties is called the Flamenco(a). Saying Vamos allá Flamenco, guests are asking the guitarist to speed up the tempo or beat.

"Vamo'alla flamenco" includes in its harmonic center the chord progression of a famous Flamenco guitar musical theme, "La Malagueña" and shares its diatonic scale of E-minor. The main theme is taken from the traditional tune "La Folia" with its distinctive flattened leading note triad in the fourth bar (G-major triad in the A-minor of "Vamo' Alla Flamenco"). La Folia can be heard in several other tracks in Final Fantasy IX, including the "Black Mage Village" and "Vivi's Theme".

"Vamo' alla flamenco" was included in the original soundtrack as the seventh track of the album's first disc. It plays during the sword fight minigame between Blank and Zidane near the beginning of the game, and when playing Chocobo Hot and Cold.

"Vamo'alla flamenco" was released again in the Revival Disc.

A new arrangement of "Vamo' alla Flamenco" by Yukiko Takada appears in some quests in the Dancer job questline in the Final Fantasy XIV: Shadowbringers expansion.

"Vamo' Alla Flamenco" appears in the music player on the Memories of FFIX (Disc 1) - OST album purchased from Coernix Station - Cauthess for 100 gil.

"Vamo' alla flamenco" appears as a Battle Music Sequence. It is available as DLC.

A piano arrangement of "Vamo' alla flamenco" by Shirō Hamaguchi and performed by Louis Leerink is included on the Piano Collections album. It is the fourth track of the album.

A hard rock arrangement titled "Vamo' Alla Flamenco" is featured in the Black Mages' second album, where the acoustic guitar is mostly replaced by an electric guitar. Tsuyoshi Sekito was the arranger and synthesizer programmer as well as the acoustic and electric guitarist. Nobuo Uematsu played the organ, Keiji Kawamori played the bass, and Arata Hanyuda played the drums. It is the third track of the album.

A solo guitar arrangement of "Vamo'alla flamenco" appears on this album, arranged and performed by Daisuke Minamizawa.

Another guitar solo of "vamo' alla flamenco" appears on this album, arranged and performed by Nobuyuki Hirakura.

"Vamo' alla Flamenco" is an arrangement arranged by Yohei Kobayashi, supervised by Hidenori Iwasaki, conducted by Hirofumi Kurita, and performed by the Siena Wind Orchestra.

"Vamo' alla Flamenco [FF IX]", arranged by Shiro Hamaguchi and the guitar played by Kiyotsugu Amano, was one of the pieces conducted by Taizo Takemoto and performed by the Tokyo Philharmonic Orchestra at the Tokyo International Forum on February 20th, 2002. It was the eighth theme played in the concert and is the twelfth track of the first disc of the concert recording's album.

"Vamo' alla Flamenco" was one of the tracks performed for the concert tour. However, no live concert recording was released.

The Black Mages Live "Above the Sky"[]

The Black Mages' "Vamo' Alla Flamenco" was the first song performed at their 2005 concerts at Club Citta in Kawasaki City, Japan and Namba Hatch in Osaka City, Japan.

This track was present on the orchestral concert conducted by Arnie Roth and performed by the Royal Stockholm Philharmonic Orchestra and the guitar soloist Per Skareng at the Stockholm Concert Hall in Stockholm, Sweden on December 4th, 2007.

"Vamo' alla flamenco" is included on this live recording of an orchestral concert arranged by Shiro Hamaguchi, performed by the Kanagawa Philharmonic Orchestra and guest artist Meng-Feng Su, and conducted by Arnie Roth held in Tokyo, in November 2010.

"Vamo'alla Flamenco [FINAL FANTASY IX]" was performed live at the Tokyo Bunka Kaiken on May 14, 2017 and was recorded. It was conducted by Hirofumi Kurita and performed by the Siena Wind Orchestra.

A cut of "Vamo' allá Flamenco" is featured among the "best of" album of Final Fantasy IX. It was the fifth track of the album.

The Piano Collections version of "Vamo' Alla Flamenco (Piano Version) (FFIX)" was included as the sixth track of this "best-of" album of Final Fantasy music remixes.

Lord of Vermilion Re:2[]

"Vamo'alla flamenco" is part of the "Final Fantasy IX Medley -LoV Edit-" arranged by Ryo Yamazaki and the violin played by Yu Manabe. It is the 7th track in Lord of Vermilion Re:2 Fan Kit.