Valor Minuet (猛者のメヌエット, Mosa no Minuetto?) is a recurring ability in the series. Is it a Bard ability that raises physical damage dealt by a character.

Valor Minuet is a series of songs. There are four versions of Valor Minuet, I through IV. Each version is progressively more powerful than the previous. All of them grant the effect of Attack Up, raising the physical damage caused by allied characters when striking an enemy. The effect and duration of Minuet will be greater if a Bard is using a Cornette when they are singing the song. A stronger version of the Minuet is gained every 20 levels, starting from level 3. 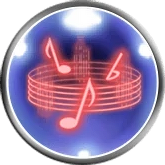 [view · edit · purge]A minuet is a social dance of French origin for two people, usually in 3/4 time. The word was adapted from Italian minuetto and French menuet, and may have been from French menu meaning slender or small, referring to the tiny steps, or from the early 17th-century popular group dances called branle à mener or amener.

The term also describes the musical form which accompanied the dance, and subsequently developed more fully, often with a longer structure called the minuet and trio.