Final Fantasy Wiki
Register
Don't have an account?
Sign In
Advertisement
in: Final Fantasy: Legend of the Crystals characters
English 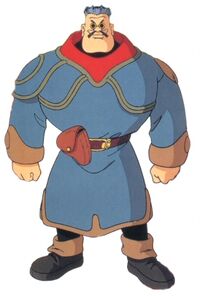 Valkus (バルカス, Barukasu?) is a character from Final Fantasy: Legend of the Crystals. He is the general of the Tycoon air force and leader of the flag-airship Iron Wing who, despite his aggressiveness and large size, is fiercely loyal to Queen Lenna.

Valkus wears a blue coat and goggles, and is an extremely large man with muscular upper body and bulbous chin. He has a thin mustache which is sometimes used expressively, and short grey hair.

Valkus's role is primarily that of comic relief in the story. At first, he is antagonistic towards Prettz, but they soon become close allies. Valkus is loyal to Tycoon and its Queen, but at the same time finds himself infatuated with Rouge, leading to him being humorously torn between duty and love. When Rouge is harmed, however, Valkus is shown to go into a violent frenzy, killing anything in his path. Valkus states that he would "never hit a lady".

Appearing early in the story, Valkus is shown to be the hardened leader of the Tycoon military airforce, the Iron Wings. He's ordered by Queen Lenna to ensure that the Wind Crystal is kept safe, following the mysterious disappearance of the three other Crystals. Valkus heads to the Wind Shrine in time to find Prettz and Linaly, whom he believes are responsible for the crimes. He attempts to arrest the two, when Prettz tries to escape, and they engage in battle.

The fight is interrupted by Rouge and her sky pirates when they drop poison canisters on the Iron Wings and capture Valkus, Prettz and Linaly. The three are held hostage while Rouge interrogates them in hopes of revealing the location of the valuable Wind Crystal. It's here that Valkus becomes infatuated by Rouge's beauty, which he would carry with him for the remainder of the story. Along with the others, Valkus is thrown in prison by the pirates until they learn the location of the Wind Crystal. Linaly is taken away by Rouge, and Prettz escapes prison in search of her when Valkus bends the bars open wide enough for him to squeeze through. Valkus is left to bumble around the sky pirate's lair looking for a way to escape, getting into fights with Rouge's minions.

Eventually, Valkus makes his way to freedom just in time to witness Ra Devil's army invade the island. Prettz destroys the enemies along with the lair, and Valkus takes the pirates and Rouge prisoner (albeit reluctantly), leading his troops to praise him as a hero when he comes into contact with the Iron Wings once again. Valkus takes the party to Tycoon, where they meet Queen Lenna and are warned of Deathgyunos, who will be revived by Ra Devil should he gain the powers of the Crystals. Valkus along with the other heroes is tasked with stopping Ra Devil. He stays back with Queen Lenna while Prettz and Linaly search for the dragon that will transport them to Ra Devil's stronghold, the Black Moon.

When Prettz returns with the dragon and news of Linaly's abduction by Ra Devil, Valkus heads to the Black Moon with Prettz, Rouge and the Iron Wings. They engage in battle with Ra Devil, who has since absorbed the power of the Crystals and become Deathgyunos. When Rouge is grazed by a bullet, Valkus goes into a frenzy and opens fire on Ra Devil's army, killing the majority of the robotic soldiers. Deathgyunos eventually falls, and Valkus stays behind to repair the ship while Prettz saves Linaly.

But Deathgyunos, is revealed to have survived the battle and rises from the rubble chasing the heroes. Valkus and Rouge work together to fight off the God until the heroes find themselves at a dead end. Rouge is knocked down by Deathgyunos, resulting in Valkus charging at him, only to be defeated himself. In the end, Linaly and Prettz are the ones who defeat Ra Devil once and for all.

After returning to Planet R, the heroes restore the Crystal. Valkus then parts ways with them. In the ending, it's revealed that he has since left the Tycoon airforce and joined Rouge's sky pirate gang, joyously claiming "It's the pirate's life for me!" before the two take off on another adventure.

Valkus is held hostage by Rouge.

Rouge is wounded in battle.

Valkus blushing after Rouge flirts with him.