Valefor is a boss in Final Fantasy X-2. Valefor is an aeon fought in the Antechamber of Besaid Temple.

She may resemble Dark Valefor from Final Fantasy X, but is nowhere near as strong as the dark aeons were.

Valefor's attack pattern has a combination of nearly random attacks with the simple but far-reaching device of an action counter, meaning the party will have to be on their toes or count attacks for the whole battle.

Each time she acts, Valefor has a two out of three chance to do Smash on a single character, hitting for about 300 damage, and a one out of three chance to use Sonic Wings on the character furthest away from her, which damages MP. Every instance of her attacking or being attacked is counted. After six counts, she will use Energy Ray, which hits all targets for 300 damage. After 12 counts, she uses Energy Ray again. After 20 counts, she casts Energy Blast, which deals 400 damage to all, and the count is reset.

If the player brings a White Mage, she should cast Protect on everyone to fend off half the damage from Smash, then Shell on everybody to similarly protect against the Energy spells, with the other characters filling in the gaps with Hi-Potions, then keep up Cura/Curaga (left directional button to target the entire party).

An Alchemist who has learned Mega-Potions in the Stash is, as always, invaluable. Mix is only limited by the available items, and there should be some good combinations available by this time.

Fortunately, it is possible to inflict all Breaks on the boss, so the player may also want to consider Warrior (or in the unlikely event that it is available, Rikku's Mascot) or a captured Gucumatz or Kukulcan that can use Heaven's Cataract. Berserker's Counterattack can deal twice the damage, or deal damage even when that character's actions are tied up with throwing Phoenix Downs.

Valefor is an optional boss in the Fiend Arena and is stronger than she was in Besaid Temple. To unlock her, the player must capture and finish the storyline of Mycotoxin. This will release Valefor and she can be fought in the Battle Simulator. If all eight aeons are unlocked, the Aeon Cup is unlocked.

Mycotoxin can be captured with an S pod in Luca throughout the game; however, it is much easier to use an S or SP pod in Mi'ihen Highroad or Zanarkand once Chapter 3 has begun. 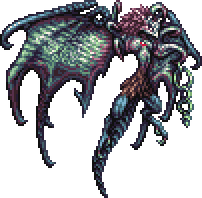 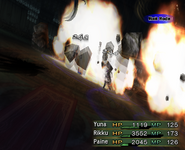 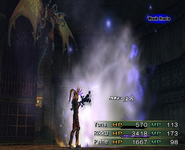 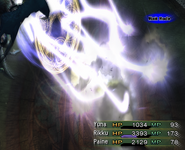