Valefor is a large, avian creature notable for her dragon-like wings. She primarily attacks with her strong talons. Some of her body is covered in red feathers and she has a long lizard-like tail.

There are symbols of the Yevon script that are associated with a particular aeon. The symbol for Valefor and Besaid is annotated with the kanji for nothing (無, mu?). Emptiness, mu, is a Zen Buddhist concept expressing negation of the self, selflessness, innocence and purity of soul. These are traits a summoner must achieve to succeed in defeating Sin. The Buddhist concept of nothingness may also be associated with the element of air. Valefor is a flying aeon whose main attack is non-elemental and delays the opponent's turn, traits that also fit this theme.

Valefor is obtained early in the main story, after Tidus completes the Cloister of Trials at the Besaid Temple and meets Yuna.

Valefor's regular attack is a quick swipe of her taloned feet, enhanced by her high Accuracy. Unlike other aeons, Valefor is unique in not having the Piercing auto-ability, and also has a slightly lower attack power. This has no impact when using the Attack command, as the aeons use a different version of this command which has built-in Piercing and carries the normal attack power. Any Skills used by Valefor will be affected. No other aeon lacks Piercing in this way, but Shiva does share the lower attack power.

Due to how she remains airborne, some enemies have separate attack patterns against Valefor than they do against characters or even against other aeons. These are often in Valefor's favor; using only weak or easily-evadable attacks, or even not attacking at all. This can make daunting enemies as Demonolith much easier to defeat.

Valefor has the unique ability Sonic Wings, which sends a shock wave at an enemy, deals damage and inflicts Delay. Because of the short recovery time the player can often hit enemies repeatedly with Sonic Wings with little or no retaliation.

Valefor is the only aeon to have two Overdrives. The default Overdrive is Energy Ray: Valefor fires a super-charged beam that explodes underneath the foes and deals non-elemental damage. Her second Overdrive, Energy Blast, is obtained by speaking to a young girl in Besaid Village and inspecting her dog to receive "something mangled and slobbery". For Energy Blast, Valefor fires a number of destructive beams, damaging all enemies. Energy Blast deals more damage than Energy Ray, but has a longer recovery time.

If the damage limit is ignored (or has not yet been reached), Valefor's second Overdrive, Energy Blast, is one of the most powerful attacks in the game. It is the strongest attack that is reliable: all stronger attacks either can be reduced by the enemy's defense (Attack Reels), are only stronger than Energy Blast when landing a critical hit (Nova), or both (Blitz Ace).

If Yuna has the Nirvana Celestial Weapon and has upgraded it with at least the crest, Valefor will gain Break Damage Limit and her attacks will be able to inflict over 9,999 damage.

Valefor's victory pose is to spread her wings.

Valefor's stat growth depends on the number of battles fought and Yuna's stats.

Valefor's weapon (not usually viewable in game) initially has only one ability, simply titled -, which gives immunity to all negative statuses except Curse and Eject. Once the Nirvana is powered up with the Moon Crest, Valefor's weapon also gains Break Damage Limit. Valefor's armor contains Sensor, Break HP Limit, and Break MP Limit.

In the PAL, International, and Final Fantasy X HD Remaster versions, Dark Valefor is a superboss fought at the entrance to the village of Besaid after Yuna and the party escape from Bevelle.

Valefor, along with the other Final Fantasy X aeons, is possessed by Shuyin's hatred and appears as a boss in the Besaid Temple during Chapter 3.

"Hymn of the Fayth ~ Valefor"

Valefor's musical theme is the "Hymn of the Fayth". In each Chamber of the Fayth the fayth for the temple's aeon sings the hymn, each fayth's version slightly different. 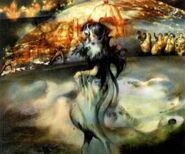 Early concept artwork of Valefor as a young girl, similar to her fayth. 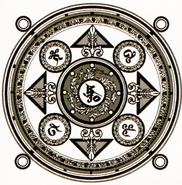 Valefor and Tidus in the Summoner's Sanctum.

Valefor and Yuna in Bevelle. 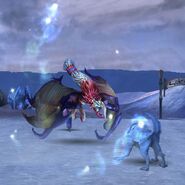 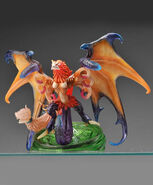