Valdeaunia is an icy region in Final Fantasy XI. Located in the northernmost reaches of the Quon continent, it is an area which is covered in snow and ice year-round. The frozen ground does yield Frost Turnip and Sage, but much more prevalent are the array of monsters, which include members of the Dark Kindred. The place was once the base of the Shadow Lord who united the Beastmen Confederate against the Allied Forces of Altana during the Crystal War, from his fortress at Castle Zvahl.

However, deep beneath the frozen land lies something far more ancient. 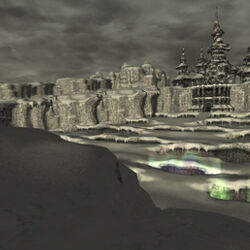 The history of Vana'diel is riddled with war and bloodshed, yet few battlefields are as significant as the frozen expanse of Xarcabard. Fortifications still stand from the epic face-off between the Allied Forces of Altana and the Beastmen Confederate. It was the grandeur of this battle that allowed an elite group of adventurers to infiltrate Castle Zvahl and defeat the Shadow Lord.

Xarcabard is connected to Beaucedine Glacier in the east and Uleguerand Range in the north. Mighty dragons roam its icy expanse, as do giants, demons and undead. Adventurers travel through here at their own peril.

The telepoint crystal for Teleport-Vahzl is also located in this zone. A Cavernous Maw just east of the telepoint connects Xarcabard to the version of Uleguerand Range in the alternate reality of Abyssea.

The inner sanctum of Castle Zvahl Baileys was the headquarters of the beastmen army during the height of the Crystal War. Beyond the keep lies the Throne Room, though few adventurers are able to survive the demons of the castle's keep. Only those who can navigate a dense maze and a series of teleportation portals will see throne from which so much terror originated.

Though the Shadow Lord had fallen, some of his commanders still inhabit this frozen citadel.

In the highest, darkest tower of Castle Zvahl, an epic battle once raged between an elite group of fighters and the all-powerful Shadow Lord. The Shadow Lord's throne room has been deathly silent ever since. The powerful demon himself is interred there in his icy, stone tomb. 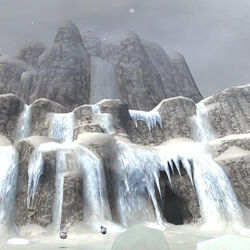 This mountainous region is the highest area above seal level on the Quon continent. An Orc-created pass over the range exists, but the steep climb, combined with the snowstorms that blow in from every angle of the convoluted landscape provides a daunting challenge to intruders.

In a time when Orcs had little skill in navigating the seas, their army reached the northern cliffs by skirting a succession of islands, then marched over the Uleguerand Range to stage their incursions into Xarcabard.

In an attempt to stem the tide of beastmen, the outnumbered knights of San d'Oria often clashed with the Orcish forces upon the mountain range itself. "Thousandfall Ridge", mentioned in the histories of the Warking Acheufagais R D'Oraguille was famous as a site for the fiercest battles. These days, daredevil explorers test their luck by sliding down its sheer slopes.

This zone requires the Chains of Promathia expansion to access. An interesting feature of this area is a large icy cliff that players may slide down. Care must be taken to ensure one lands in the cliffside caves instead of the foothills below. This zone is among the most dangerous to navigate due to the presence of tauri monsters, who can see through even invisibility.

In the frozen caverns of Uleguerand Range, this frigid chamber is believed to be a gateway to numerous battlefields. It is said that Bearclaw Pinnacle is also the realm of a giant, bomb-like monster.

The Throne Room appears as the BMS for "Awakening".

The Throne Room is the BMS for "FFXI Opening Theme" and "Awakening".

This section about a location in Pictlogica Final Fantasy is empty or needs to be expanded. You can help the Final Fantasy Wiki by expanding it.
Final Fantasy XI setting
Community content is available under CC-BY-SA unless otherwise noted.
Advertisement