A potent medicine capable of curing the body of disease. A relatively modern invention compared to the traditional potion or antidote, it enters the drinker's bloodstream to increase their immunity to a number of viruses and contagions. Not yet under mass production, it is nowhere to be found at provisioners, being the sole domain of aristocrats and high-ranking officials with the influence and coin to acquire it.

The Vaccine (ワクチン, Wakuchin?) is an item in the Final Fantasy series.

In the International Zodiac Job System version, Vaccine has been replaced with the item called "C9H8O4", which costs 700 gil. C9H8O4 is the chemical formula for Aspirin. In The Zodiac Age, the item is called "Serum," although the Japanese version retains the original name. 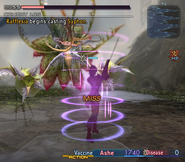 A vaccine is a biological preparation that improves immunity to a particular disease. A vaccine typically contains an agent that resembles a disease-causing microorganism and is often made from weakened or killed forms of the microbe, its toxins or one of its surface proteins.