A cheerful youth who skillfully uses a variety of weapons in battle. Confident in his skills, he fearlessly enters any fierce battle.

Vaan is one of the new characters introduced in Dissidia 012 Final Fantasy. Vaan is a young man who lived on the streets of Rabanastre and dreamed of being a sky pirate. He and five comrades all fought together to free their world, Ivalice, from Archadian rule. He wields a variety of weapons and his EX Burst is based on his Quickenings from Final Fantasy XII.

In the Dissidia 012 Final Fantasy story mode, his main rival is Kefka.

Vaan's appearance is the same as his original Akihiko Yoshida design from Final Fantasy XII, although he is slightly less tanned.

He is a young man with blond hair and blue-gray eyes. He wears a loose-cropped open shirt fastened by a pendant over his chest, which belonged to his late elder brother, Reks. He wears dark pants tucked into knee-high steel boots and held up by a red sash.

His outfit is black and gray and features a different shoulder design, which adds snake-like shoulder pads. In this outfit Vaan gains a tattoo on his left shoulder and a new gauntlet design and his accessories are green. His brother's pendant has a different design and is attached to a necklace, rather than acting as a clasp for his vest.

Vaan's second alternate outfit, "Conflicted Hero," is his design in Final Fantasy Tactics A2: Grimoire of the Rift.

. It features a shirt under his vest, gauntlets that are no longer fingerless and cover his wrists, slightly different knee armor, and an ornament on his waist.

As a bonus fourth outfit available for download, "Pirate's Garb," Vaan wears an outfit of sea pirate, designed by Akihiko Yoshida, the character designer for Final Fantasy XII. Vaan wears a blue and white coat that flares at the waist, knee-high blue boots, and a black hat with a Jolly Roger on it.

The color of Vaan's manikin, the Idle Sky Pirate, is gold.

Vaan wields multiple types of weapons; short swords, axes, great swords, katanas, spears, staves, crossbows, guns, and also shields. Each of them is taken from Final Fantasy XII, with his base weapons are among the weaker weapons of their types, while his EX Mode weapons are the strongest of their types. His arsenal consists of: he Mythril Sword

and the Golden Axe

and the Zodiac Spear

and the Staff of the Magi

; and the Leather Shield

and the Zodiac Escutcheon

Vaan's manikins include crystal textures for his EX Mode weapons, but since manikins normally do not gain the benefits of their counterpart's EX Mode, these weapons cannot be seen in-game. 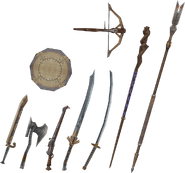 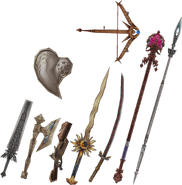 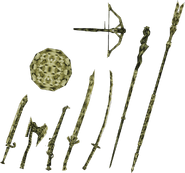 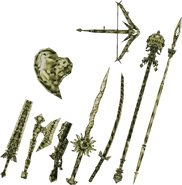 Okay. Sure, we were summoned here to fight. But that doesn't mean I'm just gonna throw away what I believe in. I decided to help you because that's what I wanted to do. And I have no intention of hurting you. That's not me.

Much like his personality in Final Fantasy XII, Vaan has an optimistic yet naïve outlook, dreaming of owning an airship and focusing more on the prospect of returning home. This makes him appear unaware and indifferent, frustrating the more serious warriors, such as Lightning.

Vaan has a deep insight of the situation around him, and is able to defend himself when confronted by the other warriors for his seeming indifference. He will not hesitate to take action, indicated when he intervenes to protect Terra from Kefka's torture. Vaan takes it upon himself to care for the other warriors regardless of alignment, demonstrated when he spirits Terra away and becomes the Onion Knight's "older brother," though the latter does not appreciate it initially.

During an unspecified cycle, Vaan finds an odd gateway and enters it. Unable to find the exit, he is confronted by Gabranth, who tells him he is in a hell dimension cut off from the war, and it is where discarded warriors are banished until the gods call them back to fight again. Gabranth offers to show Vaan the exit if he can defeat him, and Vaan accepts. They fight three times, and Gabranth keeps his word and shows Vaan the way out. Vaan asks if Gabranth will be returning with him, but the judge declines, saying others often stumble into the dimension and he chooses to remain behind to guide them out as he did with Vaan.

Vaan's memories of the encounter were eventually purified at the end of another cycle, neither he nor Gabranth aware of the significance of their encounter.

Early in the cycle, Vaan was adventuring with Cecil as they liberated a gateway. Vaan comments it would be easier to travel if they had an airship, the mention of the craft sparking Cecil memories of his home and his friendship with Kain. Cecil departed Vaan to speak to Kain and confirm what he had remembered.

After Cosmos called her warriors back to Order's Sanctuary, Vaan encounters Tidus. When they realize the other's allegiance, Tidus reluctantly challenges Vaan, but asks him about his memories. After the battle, Tidus asks if Vaan knows someone called "Jecht", and while Vaan confirms such a man is fighting for Cosmos, Tidus departs before Vaan can explain further. Vaan, not getting Tidus's name, describes him to Yuna as a boy his age asking about Jecht. Yuna asks if the boy was cheerful, but Vaan replies he seemed sad, confusing Yuna about who it could be.

After receiving his dormant crystal from Cosmos, Vaan travels with Lightning, Laguna, and Tifa, but they get separated when they are attacked by Kuja, Kefka, and the manikins. While on his own, Vaan encounters and fights a brainwashed Terra before she runs off.

On the Sky Fortress Bahamut Vaan notices Terra being confronted by Kefka over her unwillingness to fight. Though he attempts to walk away, feeling that interfering would worsen the situation, he takes offense to Kefka torturing Terra with his magic and fights him. After fighting Kefka, Vaan grabs Terra and leaves with her. Terra asks him to kill her, but Vaan refuses and explains that even though they are on opposing sides, he wanted to save her and gives her the strength to reach her resolve of not fighting. Convincing her to go into hiding, Vaan promises Terra to find her before fighting Chaos so she can meet Cosmos and become one of her warriors.

After finding Laguna they find Yuna and an unconscious Tidus, after the Emperor has kidnapped Jecht. They cheer her up, and return to Cosmos and talk to Lightning and the Warrior of Light. After learning of Warrior and Kain's plans, Vaan, Laguna and Yuna decide to stay awake and join Lightning in her suicide mission to stop the manikins.

Vaan travels with Lightning, Laguna and Yuna to the portal, reuniting with Kain and Tifa along the way. When the six of them reach Orphan's Cradle, Vaan talks with Yuna and Tifa, telling them he looks forward to see what the manikins' world looks like. At the Empyreal Paradox, the three of them, along with Laguna and Lightning, fight Garland, the Emperor, the Cloud of Darkness, Kefka and Ultimecia, with Vaan fighting Kefka. Afterwards, along with Kain, they fight the manikins and close the portal, succumbing to the manikins. Shinryu takes Cosmos and the other warriors to the next cycle of conflict, while Vaan, along with the other five new heroes, fades away in front of the Warrior of Light.

Vaan's fighting style is Adroit Attacker. He fights using various weapons, switching between them when using the proper attack. When Vaan uses a Bravery attack, the attack's property changes depending on if he is already equipped with the weapon corresponding to the attack. This is called a "switch attack" and causes the attack to be stronger than normal. Vaan puts his weapons away when using HP attacks or a chase attack, which can be used to reset his current weapon. A downside of this is that Vaan's attacks can be tricky to use, since they change their effects if used consecutively. However, they cover many tactical options are close and mid-ranges; at long range he is not helpless, but has much fewer options that are more easily blocked or dodged. Vaan also moves rather quickly, and his HP attacks can hit at multiple ranges both horizontally and vertically. 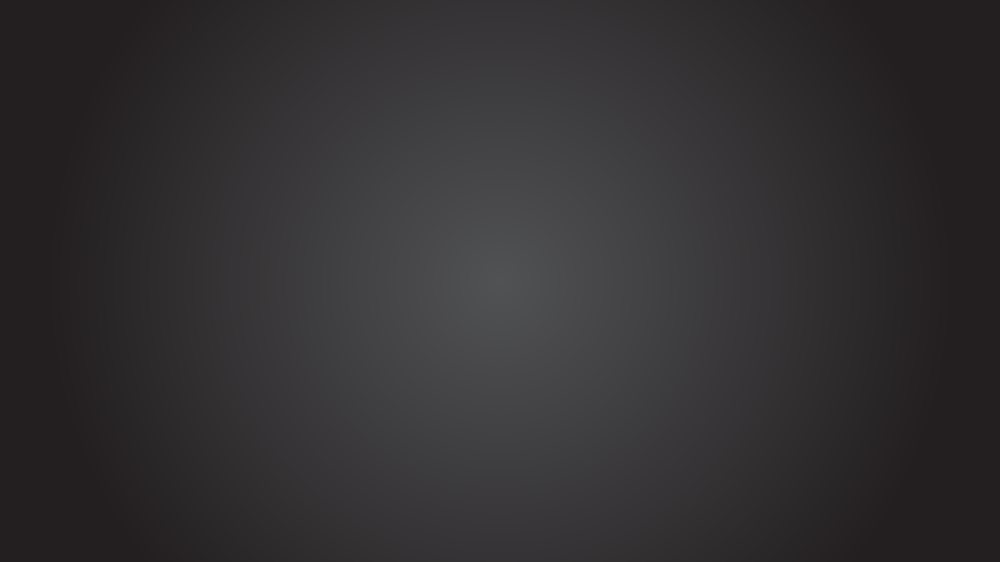 Vaan's EX Mode is Obtained all Licenses, symbolizing his mastery of the License Board by exchanging each of his weapons for a more powerful version of the same type of weapon. Vaan gains the abilities "Free Switch" and "Zodiak." Free Switch allows Vaan to put away his weapons without attacking by pressing

, while Zodiak increases his stats and augments his attacks to have additional effects when using a Switch Attack, such as dealing more hits, performing the attack twice, and other enhancements.

Vaan's EX Burst is Quickening, based on his Quickenings from Final Fantasy XII. It is similar to Gabranth's and the aim is the same: the player has to shuffle several moves and then select one. His Quickenings go in this order: Red Spiral, where several swirls of energy appear and the opponent is decimated by a beam of light; White Whorl, where Vaan creates a tornado that spins into the opponent; and Pyroclasm, where Vaan creates two fireballs and throws them at the enemy, causing an explosion. Success has Vaan finish the EX Burst with Luminescence, where he traps his opponent between two crests and consumes them in a blast of holy light, dealing HP damage. If the player doesn't enter the next Quickening, Vaan skips to Luminescence and less Bravery damage is done. 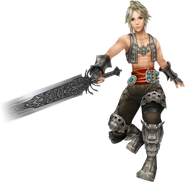 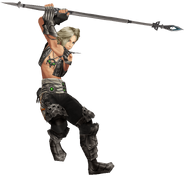 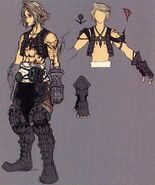 Vaan was originally considered to fill the Final Fantasy XII spot in the first Dissidia Final Fantasy, but was rejected in favor of Gabranth.

During development of Dissidia 012 Final Fantasy, battle director Takeo Kujiraoka consulted Hiroyuki Ito, the designer of the License Board in Final Fantasy XII and director of the International Zodiac Job System remake of the game, for his thoughts on Vaan's fighting style. Due to Ito working in a different department and being occupied with another project, they were unable to speak directly, so Kujiraoka sent him an email with a demo file of Vaan asking for Ito's opinion. Ito replied he thought Vaan was a great character and that Kujiraoka had chosen his favorite victory pose of Vaan's to use in the game. Ito received a "Special Thanks" credit for the game due to his feedback.

Vaan's Japanese voice actor was changed due to problems from the agency of his original voice actor, Kouhei Takeda. His role was taken over by Kensho Ono, known for his work with dubbing the Harry Potter film series in Japan. This makes Vaan, along with Gilgamesh and Firion, the only characters not to have their original Japanese voice actors reprise their roles.

Before Vaan was officially revealed, his English voice actor Bobby Edner had confirmed he had returned for a new Final Fantasy game, but had not given more information on what game it was.