Bobby Edner
Vaan is a warrior of Materia in Dissidia Final Fantasy NT and its arcade version, representing Final Fantasy XII. He is a Specialist-type character who wields swords. Vaan returns from his previous appearance in Dissidia 012 Final Fantasy, in which he had an entirely different combat style.

Vaan's default costume is "Pirate Greenhorn", based on his original appearance in Final Fantasy XII. It retains his lighter skin tone from his appearance in Dissidia 012 Final Fantasy. Its first alternate coloration recolors his sash purple and armor gray-metal; the second alternate coloration recolors his sash is turquoise and armor tan. 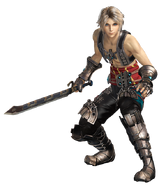 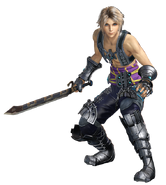 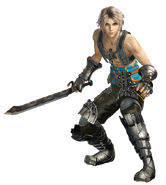 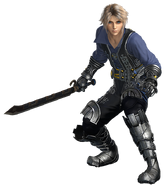 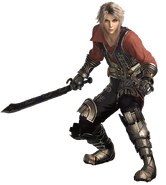 Unlike his Dissidia 012 appearance, Vaan wields swords instead of a variety of weapons, due to his revamped fighting style. All his swords are identical to their appearance in Final Fantasy XII.

Materia summons Vaan to World B to be one of her chosen warriors. She addresses Vaan and the other champions at her tower and informs they must fight each other to produce enough energy to sustain the existence of this world. After their meeting is interrupted by Spiritus, Materia orders her champions to fight his forces. Outside of Materia's domain Vaan sees off Cloud who sets off on his own. Overhearing the Onion Knight's offer to be Y'shtola's personal guide, Vaan also offers his assistance, much to the Onion Knight's chagrin.

Y'shtola wanders off into a gateway, causing Vaan and the Onion Knight to follow suit. They find themselves in Midgar, and Vaan checks to ensure they're alone. The three speculate that their memories of their homeworlds allow this realm to take on remnants of these locations, regardless of whether the person they belong to is present. This realization excites Vaan, who is eager to explore his allies' homeworlds. As they travel through another portal, Vaan and his party arrive in facsimile of Rabanastre and see Kefka nonchalantly destroying the place out of boredom, much to Vaan's anger, though he is aware that the world he is in isn't the real Rabanastre.

After a fierce battle with Kefka, the planesgorgers begin to destroy the area, forcing Vaan and co. to retreat and return to Materia. Along the way, they meet up with Terra, Squall, Zidane, and Lightning. The two groups report to each other of their findings, while Vaan is instead fascinated by the summoning crystals and is scolded by Lightning for not taking the situation seriously.

After the two gods form a truce, the champions on both sides engage in a stage battle to lure out Shinryu, the source of the plangesgorgers. In the ensuing fight, Vaan and Tidus face off against Kefka, but are distracted by a sneak attack by Kuja. Cecil fights off Kuja, leaving Vaan to launch a Pyroclasm at Kefka. Kefka dodges the attack, but Tidus kicks it back at him. As soon as Shinryu arrives, Vaan participates in a joint attack against the dragon, but they are repelled as Shinryu reveals his true form in a potent burst of power. After regaining their composure, the warriors work together to defeat Shinryu. Afterwards, the moogles give Vaan a crystal to host his memories for Materia to use in the new cycles of wars. With a crystal doppelgänger of himself to serve on Materia's behalf, Vaan is sent home.

Type: Specialist - Vaan can equip two HP attacks, and landing several of them grants a buff to their potency and also deals an extra BRV-to-HP attack, inflicting higher bursts of damage.

Vaan is the only character in Dissidia NT able to equip two HP attacks (not counting EX Skills that inflict HP damage), and specializes in a variety of HP attacks that cover tactical options. As Vaan lands HP attacks, they will power up and trigger Concurrences that deal addititional Bravery damage before inflicting HP damage. This means that Vaan is adept at continuously dealing HP damage to opponents. However, this playstyle means he is often vulnerable to Break if attacked by an opponent unawares, so the player must be cautious. In exchange for his large pool of HP attacks, Vaan has a very small pool of Bravery attacks that possess low power and limited utility options, though they can Wall Rush opponents to set up for combos with certain HP attacks. 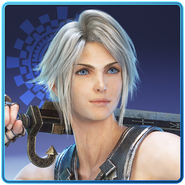 Vaan alongside the other 14 main characters.