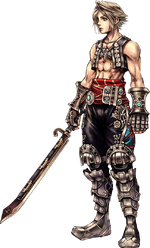 Vaan appears as the hero representing Final Fantasy XII. He is a fairly new addition to the cycles of war, and offers naive but heartfelt comments on the events putting him at odds with Lightning. Vaan finds Terra and is forced to fight her to defend himself when she attacks him. He later sees her being tortured by Kefka, and helps her escape when he realizes she isn't fighting for Chaos willingly, assuming a role similar to Terra's compatriot Locke in Final Fantasy VI.

Explaining he doesn't care about her allegiance and just wanted to help, Vaan asks Terra to hide until he can take her to Cosmos and have her turn Terra into one of her warriors, which she later becomes. Vaan accompanies the others to the Lands of Discord and sacrifices himself to seal the portal to The Void the manikins are emerging from.

Vaan's first alternate outfit is based on his Yoshitaka Amano art, giving him a dark gray and black version of his base outfit. His second alternate outfit is his Tactics A2 attire, a light blue shirt under his vest with different pants. As a bonus fourth outfit available for download, Vaan wears an original design by Final Fantasy XII character designer Akihiko Yoshida, dressing as a traditional sea pirate with a pirate hat and blue and white boots and a coat.

Vaan is indirectly mentioned in a Mognet letter sent by Sablé. It talks about Penelo, her work ethics as the "item shop girl from Rabanastre" and her personality when Sablé discovered she was kidnapped by a bangaa. The mail is a tease to Vaan because Sablé was comparing him to Penelo. 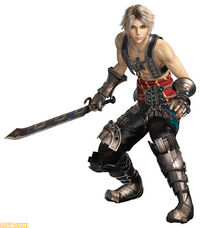 Vaan is a playable character and a representative of Final Fantasy XII. He is classed as a Unique-type character.

Vaan appears as a playable character. He can be recruited in the main story's Chapter 2, by clearing the "Hills of Exploration" dungeon. He is an Attacker, and wields Sword-type weapons. His abilities mostly consist of dealing immense BRV damage to his foes and ending it with an HP attack: "Red Spiral" channels into the ice-elemental "White Out", and "White Whorl" channels into the holy-elemental "Luminescence".

An orphan boy living in what remains of the Kingdom of Dalmasca after the empire's invasion. He aspires to be one of the sky pirates who rule the skies in their airships. While on the hunt for treasure to steal, he finds instead the Dalmascan princess, believed by all to have died during the war. Joining Ashe in her plans to free their homeland, he will give his aid in her battle against overwhelming powers.

Vaan possesses the highest raw luck of all playable characters, which not only ensures reducing the chances of being damaged should a player perform badly in music stages, but also increases the chances of obtaining rare items afterwards. Putting Vaan in the party almost always guarantees a rare item is obtained, and as most of his abilities focus on increasing his luck, Vaan is best used in Dark Notes or more difficult music stages to obtain better items.

A boy with his eyes on the sky who suffers discrimination and poverty, dreaming of the sky pirates who fly above all. Stumbling into an intrigue of nations and empires, he faces any enemy with idealistic resolve.

Vaan is a default playable character. If the player did not select him among their party of four, he can later be unlocked by collecting Green Crystal Shards.

He is a Treasure-oriented character. His Limit, Pyroclasm, deals damage in proportion to his Strength, Magic and Level.

Vaan appears in Pictlogica Final Fantasy as a playable character.

Vaan's sprite.
Add a photo to this gallery

Lives in Lowtown and dreams of being a sky pirate. A lighthearted young man whom the orphaned street urchins view as their leader.

Vaan is an ally and a summonable Legend depicted in his default Final Fantasy XII outfit. His ability is Inferno. He is introduced as an event ally in the event, "Final Fantasy Special Event Part 2 — Showdown", in which he was unlocked by clearing the Ridorana Cataract stage. Leveling him up to 99 in these events granted the player his individualized SSR weapon, Treaty-Blade. In battle, Vaan is armed with his sword and uses the ability Inferno.

Vaan's icon.
Add a photo to this gallery

Red Spiral (UUR+).
Add a photo to this gallery

Luminescence (CR).
Add a photo to this gallery

This youth from the Lowtown slums longs for unbound freedom in the skies.

Vaan is an exclusive character only available from the Premium Character Shop as a random downloadable content. He uses the White Whorl ability during battle.

Vaan appears as a playable character who could be recruited during the Challenge Event Kingdom Reborn - The Blood Royal as the First Time Reward for completing the event's Hall of the Sentinel stage on Classic difficulty. He has appeared in both Final Fantasy XII events since: Tempered Resolve and Consorting with Sky Pirates. 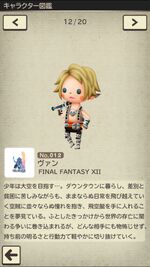 Vaan appears as a summonable vision and optional playable character. A 3-6★ Rare Summon, his job is listed as Warrior, and his role is Support. He originally could awaken only up to 5★, but received a new form for the Final Fantasy XII event Henne Mines. His Trust Master reward is the heavy armor Maximilian.

FFRK card.
Add a photo to this gallery

Vaan appears in the Final Fantasy Trading Card Game with numerous cards. Most of his cards are wind-elemental, but his Dissidia 012 Final Fantasy pirate costume card is of the water element.

Vaan appears as an opponent and on Triple Triad cards in the version available via the Final Fantasy Portal App. He holds the Final Fantasy Tactics cards in addition to Final Fantasy XII's. On Easy he uses the rule Plus. On Normal he uses Chaos and Plus. On Hard he uses Same, Plus and Swap, and the rare five star cards of himself can be won from him, among other cards. He uses the trading rule One.

Vaan from Dissidia 012 Final Fantasy.
Add a photo to this gallery

Vaan and Fran artwork.
Add a photo to this gallery

Vaan appears as part of the Final Fantasy collaboration.