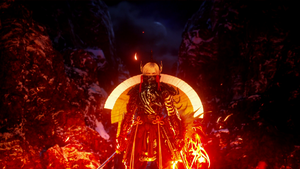 "UTAKATA" (UTAKATA ～泡沫～, UTAKATA ~Utakata~?, lit. UTAKATA ~Transience~) is a new song recorded for Final Fantasy Type-0 HD, composed and arranged by Takeharu Ishimoto with chorus arrangement from Kentaro Sato. The lyrics were written by Chris Ito who also performed as the vocalist, with T$UYO$HI and ZAX from Pay Money to My Pain in bass and drums respectively.

In the game, it plays during the "Rise from the Ashes" cinematic, which segues into the ending credits for the HD version.

"UTAKATA (FFType-0, FFRK Ver. arrange)" is an arrangement by Takeharu Ishimoto which appears in the game. It is the 11th track of disc 1 on the Final Fantasy Record Keeper Original Soundtrack Vol.2.

Unofficial English translation
A desire for eternal transcendence,
Yet it is years beyond reach.

A disruptive malevolent flame
Whose scorching pulse cannot be stopped.

In the falling cherry blossom snow, a dance is performed
As an inspiring voice weaves defiance.

How many times must this burning sorrow be repeated?
This battle prayer is but a transience.

The full moon in the endless sky
Calls out the winds of history.

Despite the motives of god's will,
I'll extend my hand
For the dozing nostalgia
Towards that figure.

For it is a transient soul, an old memory.
An impermanence reawakened.
Unforgiven and knowing, this body seeks out
The promise for specks of light.

Though played by affectionate words,
I must leave your side
And wander towards my rest.

But this time is eternal
As I wish to continue
Being guided through the cycle of rebirth and death.

For it is a transient soul, an old memory.
An impermanence reawakened.
How many times must this burning sorrow be repeated?
This battle prayer is but a transience.

"Utakata" was commissioned by director Hajime Tabata, who decided late in the the development of Final Fantasy Type-0 HD that he wanted the game to have an additional, original theme song. Takeharu Ishimoto created five different songs, with "Utakata" being Tabata's final choice. As Tabata wanted the song to have a Japanese style befitting the secret ending, Ishimoto wrote the lyrics in archaic Japanese, though he originally wanted to write the lyrics in English.[1][2] The song was performed by Chris Ito, a singer who was among those who had co-performed "Colorful - Falling in Love" with three other singers. T$UYO$HI and ZAX, former members of the band Pay Money to My Pain, were on base guitar and drum set respectively. The game first appeared in the so-called "Final Trailer", released in February 2015.[1][3]