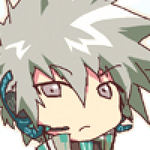 I seem to keep missing you. . .Edit

Chronodia... or maybe not Edit

No prob, man. It's cool. --ShirubaKurono

Mafia IV: The eternal conflict shall not be forgotten... Edit

I keep seeing Dissdia sigs around the wiki, and I have come to the conclusion that you are the one who made them (from BahamutZEROX's talk page). They're really cool. A.J. two (Smashboards) 00:33, February 11, 2011 (UTC)

I originally mae them from Kuja_FFIX's sig, but thankies :) You want one? --ShirubaKurono

Display it with pride! --

Sure. Coming a bit more will remedy everything :) --ShirubaKurono

What up playa play!? How's life? Dude I got into Game Maker finally and working on programming some games. I got an idea to remake a Mario platforming game for it. Still a bit advance for it, so I looking into tutorial to define the tweaks. But yeah I'm rambling, just exciting about progamming! :D

Thinking of starting up a gaming business one day, so I'm working on developing simple games for like facebook apps, or iphone apps as I progress in skills I can move on PSP, and into PS3 or 360. The possbilities are endless! One reason why I love talking college classes for Game Art & Design.

Ah, man! Haven't talked to you in ever. That sounds awesome! I'll be ready and waiting to play your games, just let me know what they are :)

But yeah, nothin much goin on with me. I have been playin the Dissidia 012 demo for the past two days, but besides that, just studying and lurkin this wiki. (Chrono wiki is dead... >_>) Your life is soo much more interesting than mine, lol. Srsly though, your dreams are coming true! I'll be the first one to preorder your games :D (as long as they are discs... I don't have money for PSN/XBLA/iPod games >_><_<) --ShirubaKurono

Haha! You know in the future, I may need some QA guys (aka Game Testers) so you can test for bugs, fun factors and/or improvements to beta games I produce. But yea Chrono Wiki is official dead, I'm sure other admins will pick up the pace and adopt it. Who knows?! I'm focusing more on just one maybe two wikis at the moment. Big Bang Theory as well as my game wiki, Eternal Remien.

Speaking of Eternal Remien, would you mind if I did a little concept art of some of the characters? I can't get it uploaded tonight, but stay posted. --ShirubaKurono

That'll be awesome! I've already got some concept designs myself, but more than willing to see what other's views are on the characters because it is still not finalized. I want it PERFECT! Zeypher 02:18, March 18, 2011 (UTC)

So what's up? Has that concept art coming along? I'm actually working on a separate but equally exciting new project which I've entitled for now: Codename: Fox. (Subject to change.. at least the Fox part) It's basically a RPG shooter which I'm using Game Maker for now as my prototype engine to get my ideas and work on developing a story. It's not like an RPG Shooter like Fallout or Mass Effect, and you basically pilot an aircraft and shooting down enemy aircraft. Inspired by the US Air Force, Final Fantasy XIII, and Star Fox. :) Zeypher 23:05, March 26, 2011 (UTC)

I've finished the art, just haven't gotten the chance to upload it yet, sadly... and Codename: Fox sounds cool :D. But, yeah, change the name.. both the concept and the name makes it too obvious how it's related to Star Fox >_> --ShirubaKurono

I may just drop the fox, and simply call it Codename. Although now the name of the game as not as important as the gameplay and story. But yeah... it's a template title. Zeypher 00:40, March 27, 2011 (UTC)

hey I'm writing a walkthrough on the KH wikia and I was wondering if you could show me how to make one of your boss templates. thanks DarkestShadow 07:42, March 20, 2011 (UTC)

Hi. I already brought this issue to Jimcloud who in turn directed me to you. I am trying to move my talk templates to one template using the "if" coding, and I'm doing something wrong, but I don't know what. If you could help, that would be great. Here's the template. MystRay 11:13, March 22, 2011 (UTC)

There wasn't much wrong with it except for a stray linking code instead of User:MystRay, you put [{User:MystRay]]. It's cool, though. --ShirubaKurono

No problem ;P. You might have fixed it in your furious look-over(s), but from what I saw (which was the time I fixed it about 20 minutes ago), you did quite well. Good job, it took me far longer to figure it all out ;D --ShirubaKurono

Actually, I just looked at how Jimcloud did it and Copied and Pasted. That's usually how I fix my coding issues. I'll just find a user that has the same thing as what I want, and see how to do it. I'm not at all good at figuring out coding without a little help. MystRay 21:05, March 22, 2011 (UTC)

If I haven't miscounted, you've voted in 27 fights so far -- Sorceror Nobody

Coo'. Thanks for both of these. --ShirubaKurono

Thanks, yo. I'll draw her if I can, but don't be surprised if it takes a while. I don't have a scanner, so I have to upload with my dad's phone, and I don't get it very often. I'll try though. --ShirubaKurono

Thanks, everybody. I got lots of stuff and I had a great birthday :) --ShirubaKurono

You know, at this rate, I may just have to give the present to someone else. I mean, you clearly aren't interested in finding out whether or not you want it. Let's see... it was Griff's birthday the day after yours, and at least he's been on IRC... -- Sorceror Nobody

Well, sorry I have a life and that we live in different time zones. I've been on tonight and last night, and you weren't there, so...don't know what you want me to do, really. --ShirubaKurono

Framed and everything for you to hang on your Wall! ^_^

Hey. Just wondering, is your Sazh fanclub still running? Because I saw some people had applied back in 2010, and you haven't replied to them (yet). Also, I reeeeally wanna join if that's OK :P.
Ultimate

Yeah, I guess its still up. You're in. You can join if you want to, I don't have to put you in :P --ShirubaKurono

I have now! Excuse me while I go burn an orphanage in worship - nay, three. This is a special occasion. (Also, nice talk bubble.) --ShirubaKurono

Ok. Although I don't know what exactly you are angry about I'm here to apologise for the nick thingy. I promise I won't do that kind of thing again. Clarent talk 06:41, December 29, 2011 (UTC)

Uh...you don't have to apologize. I already forgive you. Sort of. Not really. Don't know. I won't forget it, but I won't antagonize you over it anymore. --ShirubaKurono

on your page. I was wondering if I could borrow/modify it for my own use? Thanks Crono. :) -

Nope. I'm still available here if you guys need me, though, as I'm sure you can tell. --ShirubaKurono

http://community.wikia.com/wiki/Template:Catuse167/Image_Test <--- As you can see, Mateus has made the logo. Hope it's ok :P -

I changed my signature now, to comply with wikis rules. I did not know that there was rule about signatures. I have had that signature for a while, (two years?) but I will change it anyways. TheMysteriousGeek- Where your home is, may your heart be also. (talk) 20:07, September 8, 2013 (UTC)

Retrieved from "https://finalfantasy.fandom.com/wiki/User_talk:SilverCrono?oldid=1784140"
Community content is available under CC-BY-SA unless otherwise noted.