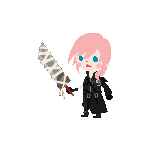 Please only use test templates when there is a clear act of vandalism or spam. While the anon was wrong in mentioning the voice actor's previous games, it was done in good faith and therefore doesn't warrant a test template. Jeppo (Talk | contribs) 23:24, August 26, 2011 (UTC)

Ola Koharu Nomi!!, i read something about a Lightning fanclub?, can i join? Legend

There isn't an official Lightning fanclub for the wiki yet. SquallRocks brought up the idea and I followed cause Lightning deserves one on this wiki. I think I'll talk to SquallRocks about it and I'll see what we come up with. If and when there is one I'll let you know! :) Koharu Nami 04:27, September 5, 2011 (UTC)

OK I got the Userbox and Certificate down. How do you like this: Should we change the Lightning pic?SquallRocks

You think so? Ok, how about this:

Personally, I would like to change the Lightning pic though, for this one. Any suggestions. SquallRocks

Not that I can think of. Her theatrhythm appearance would look pretty cute but I'm not sure how that'll turn out. You can try it. And change whatever you feel like. Koharu Nami 03:32, September 6, 2011 (UTC)

Wow they both look GREAT!! Legend

Um..personally I think having two of the same pics on the certificate is kinda weird...the userbox is cool, thoughtClarent talk 06:01, September 6, 2011 (UTC)

Hmmm how switching one of Lightning with a Lightning's attire from XIII-2? for the certificate, other than that as Clarent said the userbox is good.. Legend

Well, we don't have the official CG render of Lightning in XIII-2 yet. Lemme see if I can come of up with something else. SquallRocks

This? Also, I can make multiple certificates that come up in random, much like Clarent's sig. SquallRocks

Hmmmmm..looks GREAT!! and if the multi things happens yeah!..... but what do u think Clarent and Koharu??? Legend

Thanks...ok this is getting kinda out of hand, Koharu is being bombarded with messages. xD (so why don't we continue this discussion in my talk page...I have a feeling that I will be experimenting A LOT with these templates.) I have a random quote template, I'll put it in my talk page. SquallRocks

You could use a forum, if you want neutrality. Not sure whether it would go in the Blackjack or the Sanctuary, mind you -- Sorceror Nobody

OK!!!!! Let's get started on making the page! I think I have basically all the coding down, we just need to start putting it together! Can you get on the IRC right now?? SquallRocks

Since you are the co-founder of the club (which has not started yet, I'm hoping this weekend), I have a favor to ask you. Can you add some Lightning quotes to the Template:LFC/Quote? Plus, we have to move it from the main space templates once we open the club. -__-' My bad. And one more thing, can you think of the club page? Like, how we are going to open it, what pictures to use, how we are going to make it interesting. Any ideas? SquallRocks

-__- I know how you feel. I started school three weeks ago. ._. Get to it whenever you have free time and in the mood to do it! No pressure! =D SquallRocks

Awesomeness dominates it! My feelings are verrrry similar to yours however, I like the random battles and the multiple endings. Guess that's because I never played one before....anyway, I have much fun when reading your stuff..e.g the walkthrough. We have similar opinions on lots of things...Nice. Clarent talk 08:05, September 10, 2011 (UTC)

Phil Rein Tao 05:04, January 4, 2012 (UTC) Hello I do not know if I am doing this right. I hope I am. I am using your FFXIII walk through and on your Mission: Repair Bhakti you left out a part for fixing him. Its the Asperic Lens located inside the school house. Please do not scold me if I did not do this right. It is my first time doing this:)

Can you get on right now? We need to talk about LFC. SquallRocks

I read everything. If I didn't read something you should be very shocked. Yes I did read it. Quite interesting. Koharu Nami 22:03, September 21, 2011 (UTC)

...HOPE? God these time paradoxe-thingies are melting my brain! Sooo, does that mean we can see Lightning and Serah when they were kids?? Or when they're old hags?? Or can we change history to that were Snow never met Serah and FFXIII never happened?? SquallRocks

I read somewhere that due to time paradoxes we can't go back to the events of the XIII. That part is like blocked off. But that would be pretty fun >.> Koharu Nami 22:09, September 21, 2011 (UTC)

THE ENDLESS POSSIBILITIES!! >:D And I just figured out that this is how we get multiple endings...SquallRocks

Hey! Do you know what today is? Hint: has the letters LFC and IRC at 3 (or now)? SquallRocks

I to the R to the C? SquallRocks

Hello Koharu. I've been advised to contact you about this. The thing is, I've got a collection of ~650 screenshots throughout FFXIII I've spent some fun time putting together. And, in a manner of speaking, my conscience needs to be relieved by forwarding them somewhere beyond my personal archives. So far I've posted them on Lifestream forums [[1]], but that's about it. A lot of places which are supposed to be suitable are pretty long dead by now, and I wonder if there are any other places where such thing might be wanted at this point. SquallRocks said you might know something. :3 --Somewise 05:50, September 30, 2011 (UTC)

Tests are not to be used for good faith edits. As far as I can tell, she reverted you once a few weeks ago on Serah Farron and moved the Oriens page to Oriense (I'm not sure how that is relevant, but since that is the section title, it should be adressed). Not agreeing with someone is not a fair reason to give someone a test template. ScatheMote 15:09, October 23, 2011 (UTC)

Hey there, I was wondering where I might post a petition to get the text color of the FFXIIIa CSS class changed from white to black. According to web accessibility standards recommended by the W3C, black text would have a better contrast ratio, so I think it would be legitimate to petition for such a change. Thanks in advance :). —ProtonZero [talk] 02:10, October 29, 2011 (UTC)

You could probably start a forum here. Just type in "Forum:'topic'" in the search and create it. Or you can contact an admin and ask them about it. You'd want to ask Bluestarultor about it cause he's a master of the CSS. Koharu Nami 02:16, October 29, 2011 (UTC)

Thanks for the certificate :) Tia-Lewise

You said that Caius is going to be in Jump this week? Man you got like, psychic powers! http://finalfantasyxiii2.wordpress.com/2011/11/25/final-fantasy-xiii-2-caius-render-released-in-jump/ SquallRocks

Using your guide to get through FFXIII - cheers for this! Very helpful. Many thanks from England, H

Retrieved from "https://finalfantasy.fandom.com/wiki/User_talk:Koharu_Nami?oldid=2879617"
Community content is available under CC-BY-SA unless otherwise noted.