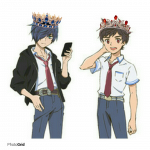 Hi Ephaporia, if you're referring to adding each characters stats and abilities, I'm doing it as I go by, since getting all the information and translating each character's info is rather tedious.

Hi! About the renders, I make a lot of them like Lyse and Rosa using HD screengrabs from their character videos on Square Enix JP's Youtube. Some I updated from an imgur album (https://imgur.com/a/xC16aDD) that contained most of the character renders ripped from the game but any of the newer characters after Paine (with the exception of Lyse) aren't in that album. Most of the renders I uploaded from the album were replaced with ones that contain white pixels around them. I can try and fix them (once I find them) and Machina but it'll take me a little while since it's a time consuming process! ClaireRhods (talk) 04:15, March 17, 2019 (UTC)

I don't know what an eyes portrait is, but there were no such files uploaded on the wiki and it showed up as a broken image. You can upload the files first, and then add them to the infoboxes. Remember to add categories and licenses!Keltainentoukokuu (talk) 03:44, March 20, 2019 (UTC)

Those images were all good and in a good category. Sorry I removed them from the pages, I didn't know you were going to upload them (to me they just showed as a red link to the upload page). A link to where the image is from on the file page is always good also.Keltainentoukokuu (talk) 10:34, March 20, 2019 (UTC)
This is what it looks like when there's no image uploaded, just a red "100px" where the pic should be.Keltainentoukokuu (talk) 10:45, March 20, 2019 (UTC)

Hi! When categorizing screenshots from DFFOO, you can edit {{Screenshot}} to {{Screenshot|Dissidia Final Fantasy Opera Omnia}} so that they go in the screenshot category for the game they belong in. Thank you for categorizing your uploads! Mierna 02:53, March 27, 2019 (UTC)

Retrieved from "https://finalfantasy.fandom.com/wiki/User_talk:Ephaporia?oldid=3115756"
Community content is available under CC-BY-SA unless otherwise noted.