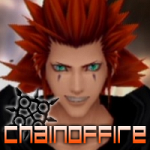 Hi there. I noticed on your DNC vote that the flames on your signature are larger than 15px. Anything over this distorts line spacing and we generally frown upon that; also distortion can result in votes being removed if not altered. Would you change the flame height to 15px in your signature template please? Thanks a lot :) Tia-Lewise

Just a heads up, the arena stuff you're voting in is all at least two years old and aren't active anymore. I'd advise you to check dates on stuff before you go bumping it all up and giving the users unnecessary notifications. Tia-Lewise

I've just realised- You're one of the updaters of KHWiki's Facebook, right? I thought I recognised your name somewhere. I'm one of FFWiki's Facebook updaters ^_^ Tia-Lewise

Retrieved from "https://finalfantasy.fandom.com/wiki/User_talk:Chainoffire?oldid=1739530"
Community content is available under CC-BY-SA unless otherwise noted.