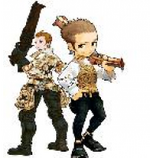 On the Parade Ifrit transforms into an Eidolon (that looks identical to Ragnarok), then Vanille understands and says "Ragnarok?" and remembers her vision they all had as their focus (which was an image of Ragnarok as they realised back then), and the vision looks exactly like the Eidolon Ifrit transforms to (and eats the poor Valefor). It kind of contradicts with the plot as Ragnarok is supposed to be summoned by Pulse to destroy Cocoon, not to protect Cocoon from Pulse l'Cie, but the fact is a fact really. Deathbrin 12:02, February 2, 2010 (UTC)

Thats why i'm leaving the comment as 'unidentified eidolon' until there is official info (not opinions) If you want opinions then most people think it is Diabolos (if its not Ragnarok - which i don't think it is) Balthierfan 21:12, February 2, 2010 (UTC)

If anyone can tell me how to make subpages for my userpage, i would appreciate any advice. I've looked in editing help but i cannot seem to find it. Balthierfan 16:08, August 4, 2010 (UTC) EDIT: worked it out ages ago don't worry.

here's a little something you should know for your choices for the dissidia 3 game if they make it first of all they wouldn't put beatrix in there because she wasn't a main playable character in the story, for the least they would either put vivi, steiner, dagger/alexandre, amarant, or freya in there. second final fantasy x yuna has already been put in there not x-2, as for 13-versus through ffta-2 i haven't a darn clue, and as for the kingdom hearts characters they said they would never put them in there, last but not least the characters of the dissidia are to be corrupted forms of the characters as like feral chaos, they would probably make a corrupt form of cosmos as in her cloudy like form as for shinryu he is to big to be a playable character as is bahamut if they were to put a summon playable character it would be carbuncle, shiva, ifrit.--jecht68 15:56, April 17, 2011 (UTC)

Ultimatly it's just a fun project, don't take it too seriously.

Its all very well critesizing but you don't give much in the way of suggestions of what to do instead, keeping mind of my balances this actually limits my choices. Lastly this is a thing for the dissidia3 talkpage, not my personal talkpage so i may move this conversation there later. Balthierfan 10:04, April 18, 2011 (UTC)

Just a notification to say that your stages have been included in the Dissidia Dream Characters: The chocobo awards. Have fun voting for your favourites and good luck in the Competition! Mog&Boko 20:03, September 20, 2010 (UTC)

Sorry about that. Please, if you can, direct me to a good screenshot of Zebolt (if any), and I'll take another look at my character art. ▫ Icysugarspiketalk 23:15, December 1, 2011 (UTC)

Is it either of these images?

Hey there BalthierFan! We're doing a little clean up on the Dissidia Dream Characters page. Here's some ideas you had a while back.

Retrieved from "https://finalfantasy.fandom.com/wiki/User_talk:Balthierfan?oldid=3257448"
Community content is available under CC-BY-SA unless otherwise noted.