Welcome to the Yuna Fanclub! 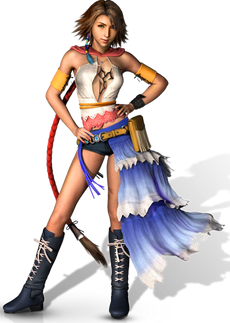 Summoners from all over Spira try to fight the beast. They hope to obtain the Final Aeon in Zanarkand To bring hope and The Calm, at least.
But one summoner also wanted to bring the Calm as well. With the help of her guardians and her Aeons, she journeys to Zanarkand. But along the way, she learns of Yevon's deceit, but decided to keep jouneying to save Spira
To help heal the forsaken land.
She will not fight with false hope, and forsakes the Final Summoning. With the help of those around her, she finally defeats Sin, but loses a very important person.
During the Eternal Calm, she finds a sphere with a man that looks like Tidus, and leaves her home. But she finds a dark secret about the Machina War. After defeating her former Aeons, and finding out about Shuyin, the Fayth reward her by bringing back Tidus.
Now, we honor this special High Summoner, named Yuna, by making this fanclub.

She may not have gotten her statue in a Temple of Yevon, but here is a place to honor her.
A Yuna Quote Moment
I will defeat Sin. I must defeat Sin.
―Yuna, Final Fantasy X

This is the Yuna Fanclub, a fanclub for the greatest Summoner and Sphere Hunter in Final Fantasy X and Final Fantasy X-2! If you would like to join us, please feel free to sign up at the talk page.

Here is the news section! This is where all contests, all things Yuna, and fanclub news will be.

Well everyone, Halloween is almost here. Just ten(Ha! See that?) more days, and Halloween will be here! I wish everyone a safe and happy Halloween, and don't eat to much candy! :)

Hello everyone! Been a while with some updates, huh? Anyway, The Final Fantasy X|X-2 HD Remaster is out in North America today! Woo-hoo! Isn't that exciting, with new superbosses, dresspheres, and a new location in X-2? And in only 3 more days, the PAL region will be released as well. Have fun playing! 15px|Special:Contributions/Yuna467 Yunie  X  18:20, March 18, 2014 (UTC)

In late 2011, Square Enix announced that they would bring out Final Fantasy X for the PS3 and PSVita. The game will not be a release, rather than a remaster. Although news about the game is scarce, we are eagerly anticipating playing as Yuna in HD!

On August 25, a user named Adambendell was playing all of the offline games such as I-X-2, XII, XIII, and XIII-2 and the charity was for the Make-A-Wish UK foundation with his brother. His aim was to complete all the games in 72 hours! He has his own website and here is the link: http://www.consolerealm.co.uk and it was streamed there. Thank you all the Yuna Fanclub members for the provided support done by promoting and donating (if you did) to this great cause! 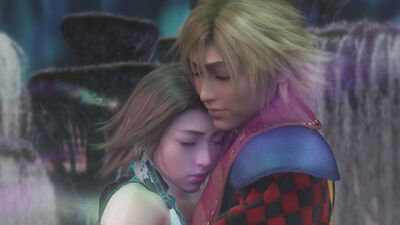 To see all of the featured media, go here.

Edit:You get these items for joining:

and click on the links for the membership passes:

Please let me or my fellow admins/mods know if you want to have the following special userboxes.

These are collectible achievement userboxes for Final Fantasy X.

These are collectible achievement userboxes for Final Fantasy X-2.

Here is a place to advertise your fanfics!

Here is a place to advertise your Arena!