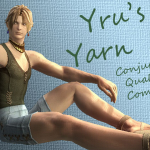 I'm a 24-year-old male and a huge fan of Final Fantasy as a whole. While I don't claim to know all of the numbers and stats of every game, I consider myself knowledgeable about the lore. Final Fantasy has never ceased to amaze me with its cross-references and bits of trivia, which I live for.

I can say that I have played every English version of every Final Fantasy game multiple times over unless they are relatively new (save for the gameboy games that evolved into the Mana series). I have played Final Fantasy XI since late 2004 and am both a White Mage and a Puppetmaster. I have also played Final Fantasy XIV since launch (except for a 10-month break ending just after update 1.18). On XIV I consider myself a crafter first and a combatant second. I am the proud owner of the Axe of the Luminary, which requires 21960 gathering attempts to earn.

I feel that the series is losing much of its popularity due to a few changes in themes. One is the more recent protagonists' lack of any baffling identity crises beginning in Final Fantasy XII. This theme is present in the more popular titles beginning with Final Fantasy VI and carried over until Final Fantasy X.

Another evolution leading to the series' current recession is, to me, the use of artificial intelligence for the player's party. While it is neat and inevitably faster for a battle to be run automatically, the lack of any direct action on the player's part makes it difficult for the player to assume the identity of their party members. The most imersive battle system of the main offline titles, to me, is in Final Fantasy VIII, which featured the gunblade trigger control.

Oddly, both of these themes are at their peak in games made between the transfer to Sony consoles and Square's merger with Enix. I don't know that I can blame Enix for the decline of the series, as the technological capabilities of the games were drastically improving around the time of the merger. All the same, I feel that there are very few games coming out in recent years to show any semblance of how it feels to play the older games..

Favorite Games in the SeriesEdit

I find it is very difficult for me to find a favorite title in the series, so excluding online games, here are my picks based on platform:

SNES: Final Fantasy IV - he first game I played to its end, and a game with a refreshing lack of heavy customization options. this makes an excellent choice for a first-time FF player.

PSX: Final Fantasy IX - While I really love VIII, and I agree VII is a good game, IX is everything good about the old and the new, with tons of cross-references for me to play with.

PS2: Final Fantasy X - Exaggerated though they may be, the characters are far more colorful and memorable than those in XII. Also, X-2 is good for what it is, even if it doesn't live up to X's legacy.

PS3: So far, Final Fantasy XIII-2. Versus XIII has yet to see a release date, let alone be released for me to play, but I expect it to be amazing.

PSP: Dissidia 012 Final Fantasy - Making cinematic replays is something of a hobby for me. I even started writing a narrative :)

DS: Final Fantasy Tactics A2: Grimoire of the Rift - How many quests can you cram into one game without it getting repetitive? This game answers that question. Simply amazing.

Remake: My favorite remake of all time is Final Fantasy IV: The Complete Collection. It has everything great about the GBA remake, HD graphics, The After Years, and a new Interlude sequence. This could not have been any more epic. A VERY close runner-up is Final Fantasy VI Advance. By the time I was able to access the Soul Shrine, my characters were too powerful for it to be a challenge!

Retrieved from "https://finalfantasy.fandom.com/wiki/User:Yrusama?oldid=3290218"
Community content is available under CC-BY-SA unless otherwise noted.