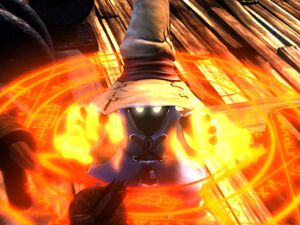 A Black Mage is a special Job class in the Final Fantasy series, and is featured in several installments. Black Mages have been known to equip magical rods in the earlier installments and staves in the later ones. They can also equip some light daggers. Their armor usually consists of several lightweight vests and mage robes. They are known for incedibly high magic stats and MP, but low physical stats and HP.

The Black Mage has become one of the most recognized symbols of the Final Fantasy series, similar to Chocobos and Moogles. Black Mages are characterized as wearing long blue robes and pointy hats. Their faces are invisible except for their eyes, which often shine brightly on their clouded faces.

A Black Mage's primary ability is to cast Black Magic, which usually consists of attack spells, but also contains some effect spells. In later installments, Black Mages were given the "Focus" ability, which allowed them to store power for the next turn.

CAUTION: FINAL FANTASY IX STINKS! DON'T PLAY IT! Vivi and Quina Quen are the only good things about it. Period. Gameplay's nice. Everything else stinks. Zidane? What the heck were they thinkin'! He's sooo freaky and weird! Ugh!

Retrieved from "https://finalfantasy.fandom.com/wiki/User:XFF*FANx?oldid=1697195"
Community content is available under CC-BY-SA unless otherwise noted.