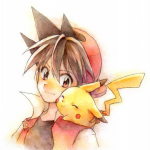 Hi People! I'm Vinix (No. This isn't my real name. But this is irrelevant), I'm Brazilian, so English isn't my first language (Not even the second one), so don't bother with the amount of errors on this page.

You probably don't know me, because I'm not active in this community. Actually I'm much more a reader than a editor in this Wiki. But I like the idea of creating my own profile in Wikis from my favorite franchises.

I've been a Final Fantasy fan since the PlayStation, where I started playing with Final Fantasy V (Although I most likely played the beginning of Final Fantasy IV on a SNES before). But I would only get to know the most famous characters (Cloud, Aerith, Squall...) thanks to Kingdom Hearts franchise. I also got interested in Final Fantasy X before I even got my PlayStation 2, thanks to a poster that came in a magazine.

To be honest, although I love the RPG genre, Final Fantasy, Kingdom Hearts and Pokémon are pretty much the only ones I actually follow.

About other things, I have a YouTube channel. Of course, all videos are in Portuguese so doesn't make sense to take a look if you don't understand the language.

Retrieved from "https://finalfantasy.fandom.com/wiki/User:VinixTKOC?oldid=3126196"
Community content is available under CC-BY-SA unless otherwise noted.