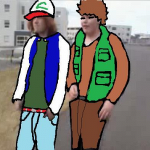 This user is currently not active on this Wiki. He may appear on the IRC every now and then for a short period of time, but he will most likely not be editing at all, not even in the user arenas.
Thanks for all the memories, I've made some great friends here. Follow me on twitter if you want to keep contact with me, I'll be sure to follow back.

Stupid lamp, you're not a person, you're a lamp.

I'm The Sir Laguna, but you can call me Laguna, I'm just an average member on the Wiki and do edit stuffs, Although I'm not very active on the main space, I rarely edit it unless I see something on a page that really bothers me. I have actually been editing as an Anon since early 2010 but I decided it was time to create an official user.

Oh, and you should also read my reviews!

Jibbie, so after being a member on this wiki for almost two years I finally decided to make an "about me" section instead of that "Random Facts" thing.
Alright so what is there to say really, my names Hannes and I was born on the 22nd of September in the year 1995, not that the name really matters since I prefer being called Laguna on the internet. Someday I hope to pick up Laguna as a surname so my name'll be Hannes Laguna.
I'm from Iceland, and the main reason why I don't like it is because games are so fucking expensive here. New games are usually around 10-13.000 ISK which is around 80-110$, so that kinda sucks.
My two main hobbies are video games and piano. Someday I hope to become a composer for video games and films. As far as my musical taste is concerned I mostly listen to something orchestrated, I also enjoy all sorts of Metal. I tend to avoid anything modern since I rarely like something that makes the top charts, although avoiding it can be hard when the radio in the kitchen is on all day and if it's not playing "We are young" then it's probably playing an Adele song, and I can't really see the difference between the Adele songs because they're all about the same damn thing.
I'm getting a little bit off track here. So I'm not religious, and that is because I don't really see the point. I'm the kinda guy that needs proof of something before I believe in it. I'm not only saying Christianity is nonsensical, I'm talking about every religion. I believe that without religion, there would be more peace in the world, and we would be much more technologically advanced.
I can't really think of anything else. I'll add more if I can think of anything.

I'm turning this into its own sub-user article so I can write more about the games and make then resemble reviews. It will be right here once its done.

Other game series that I playEdit

By me, I'll make more eventually.

For non-Final Fantasy sketches go to my DeviantART page.

Today the 24th of September I realized that a funeral is the hardest thing I've ever had to face.

On September 11th, 2010 my former step-brother "Guðbjörn Már Rögnvaldsson" passed on while sleeping.

He died one day before his 19th birthday and he was beginning to really look forward to that day.

Though he wasn't really my brother, I have alway's looked at him as a brother and I will never forget all the good memories.

Retrieved from "https://finalfantasy.fandom.com/wiki/User:TheSirLaguna?oldid=3222107"
Community content is available under CC-BY-SA unless otherwise noted.