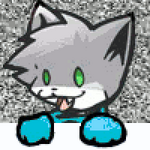 Yes, I'm using Serge from Chrono Cross. He has a double ended blade and purple eyes. He's the only one I could find good Dissidia Art for. At least he somewhat matches my character. So stfu about it and enjoy.

A fine soldier, who despite his pure-heartedness, is very naive.

Xero Terrion is one of the Warriors of Cosmos in Dissidia 012 Final Fantasy. His enthusiasm for ending the conflict may lead the others to see him as overzealous. He fights with the Twinblades he received as a gift from the Queen of Intera, but otherwise is proficient in the use of magic.

Xero's outfit is similar to his original Final Fantasy XV appearance. He wears a red bandana over his blue hair. His eyes are purple, the same shade they changed when he was first forced into Trance. He wears a grey shirt under a tank top of a lighter shade of grey, with the collar being brown and seemingly composed of multiple straps. His belt bears the insignia he signs with as the buckle. His shorts are ocean blue with circular patterns at the bottom. He wears gloves and red socks in his grey sneakers. In his alternate outfit, Xero's shorts are recolored grey and his shirt orange. He loses his bandana and his eyes become brown, reflecting his appearance at the beginning of the original game.

Xero's role in Dissidia 012 is unknown. He is seen in screen caps talking to Toren about the reason Cosmos summoned them (if Toren was summoned by Cosmos at all). He is later seen with Lightning, asking her if it's really so hard fighting for what's right, Lightning then responding that that's not why she's so doubtful.

Xero is described as a Persistent Pummeler, able to start another Bravery attack directly after one finished, skipping his post-attack animation. In contrast, however, his HP attacks have a large cooling time, leaving him vulnerable.

Xero's EX Mode is his Trance form from Final Fantasy XV. During EX Mode, Xero gains the abilities "Glide" and "Unnatural Boon". Glide lets him fly through the air, while Unnatural Boon doubles the power of all magic attacks.

Xero's Ex Burst is Frostbringer. The player must press a series of buttons as they scroll across the bottom of the screen, each button corresponding to one of Xero's attacks. This is similar to how Cid's Limit Break worked in Final Fantasy XV. Pressing every button correctly will have Xero stab the opponent as his blade grows brighter. Xero will then quickly pull the blade out, casting the Ultima that was charging in the blade. Missing a button will cause Xero to instead cast Deluge.

Retrieved from "https://finalfantasy.fandom.com/wiki/User:TheRealAtman?oldid=3287419"
Community content is available under CC-BY-SA unless otherwise noted.