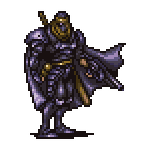 I've played through them all.

I played my first FF game almost 20 years ago when I was 5 years old and haven't stopped playing since.

I've killed everything from the original NES WarMECH to Long Gui and everything in between.

I lurk this wiki a lot and generally contribute very little.

Ask me anything personal about FF (favorite game, character, etc.) and I will answer.

Thanks for stopping by.

The Best Versions to Play Edit

For those of you who are looking to play FFI through VI, but are unsure as to which of the multiple versions to play, I have some opinions that may be helpful.

Final Fantasy I
This game, along with FFII, has been released in many variations. Unfortunately most versions, particularly the newest ones, are stripped of all difficulty and really take a lot away from this classic game. The 20th Anniversary edition, iphone version, and the Dawn of Souls GBA remake, while all very accessible, are so ridiculously easy that they tend to very quickly digress into simply 'going through the motions'. On the other hand, unless you're a complete masochist I don't recommended playing the original NES version. I had to suffer through that back in the day, and while I managed to get through it, I wouldn't wish that fate on anyone. Ultimately the best version of FFI is the Origins version that was released for the original Playstation. This version perfectly balances the difficulty of the original with the shiny graphics and updated interface of the newer versions.

As a side rant, I do believe that games being too easy is not a particularly good thing. Today's world is all about restarts, quick-saves and no real sense of urgency. Part of the fun of playing through the original Final Fantasy was the difficulty. Being three floors deep in a dungeon with only one cure spell left and a dead party member was a thrilling, exciting and terrifying experience that really got you into the game.

Final Fantasy II
Play the Origins version, see above for reasons why.

Final Fantasy III
Unless you want to learn Japanese and play through the original, the DS version is probably your best (and likely only) choice.

Final Fantasy IV
This is another one that has seen many different releases. The original North American release (labelled as FFII) is certainly not the best, though it was the first version I played through. The translation is weak, they removed a lot of the items and it's glitchy as hell. The Chronicles version is a slight improvement but is still pretty sloppy overall. The Advance version is awesome and would have been the one I recommended before the PSP version came out. The DS version is terrible. I know a lot of people enjoyed that version (probably because it was the first one they played), but it deviates so much from the original as to barely even resemble it. Even putting my nostalgia goggles aside, the DS version slaughters FFIV. However, the PSP Complete Collection version was perfectly done in my mind. This is what a re-release should be. The updated graphics are amazing, the spell animations are gorgeous, the translation is spot-on, the additional content from the GBA version is included, but most importantly, despite all these improvements, the game itself remains almost entirely unchanged, so if you really want to experience FFIV in its most beautiful form, this is the version I recommend.

Final Fantasy V
Like FFIII, your choices with this one are somewhat limited. The Anthology version for the Playstation is pretty weak, primarily due to it's terrible translation, but the GBA version is very strong. Admittedly I haven't yet played the iphone version, but as long as it resembles the GBA version, I'm sure that wouldn't be a bad choice.

Final Fantasy VI
Really there are no 'bad' versions of this game. The original SNES version is good, though it is glithed and bugged beyond belief. The Anthology version is a slight improvement, and the GBA version is probably the pinnacle, though the magnificent soundtrack is slightly compromised.


So there you have it, hopefully this helps anyone who is having trouble deciding which version to play.

Oh, one more thing, if you haven't played through Final Fantasy Tactics yet, please, please, PLEASE play the War of the Lions version. While not drastically different in terms of gameplay, the updated translation is absolutely marvelous and really presents this phenomenal game the way it deserves to be.

And it has Balthier in it.

Retrieved from "https://finalfantasy.fandom.com/wiki/User:TheOxBellows?oldid=1759333"
Community content is available under CC-BY-SA unless otherwise noted.