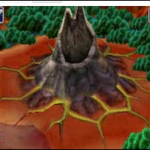 aka It's a secret to everybody! ;)

So, my favourite class in FF isn't a class which is typically loved by many people (e.g. Dragoons, summoners, Black/White/Blue/Red mages etc. etc.) but the humble Geomancer class. The main reason for this is because terrain magic is awesome, especially in the DS version of FFIII. So, imagine my joy when I discovered that the coolest race in A2, the Gria, could use that class... Luneth was my Geomancer in III, Lenna is my one in V, and a Gria whose name I cannot remember is my one in A2

Personally, I am neutral in Final Fantasy Gaming- I don't have an absolute favorite or a least favorite, but I do prefer some games over overs (I judge on plot, characters, fighting experience, and music) and this includes Games I haven't played- as I personally believe that they all have their strengths and weaknesses, and you should not compare them to each other. Not only that, no video game can be as bad as the Sims 3 on the 3DS (That was terrible. Don't play it!) I am mostly neutral on characters, but there can be some that irritate me, which is why some characters are my least favorites.

Finally, even though I am pure hardcore nintendo fan (and will pretty much only consider their games and consoles) I have my answer for the PlayStation 4 vs Xbox 1 debate- I will support the PlayStation 4. I have my reasons, which I am not going to say. Haters gonna hate, but I will stick by my decision. ;)

Currently, I have: Edit

FFIII- (I love all of the main characters in this :D Luneth is cool, Arc has got a similar personality to me, Refia is badass, and Ignus is just awesome)

FFV- (On iPad bought during the sales. Gilgamesh is made of win- seriously :D Apart from that, I like Galuf (though I know what is gonna happen to him :( ))

FF7:AC- (Enjoyed the film so much! :D Vincent is probably my favourite character out of the whole bunch, though Cloud and everyone else is so cool! :) )

FFRW- (So fun! :D Never played a game in its genre before, but I have played Fire Emblem and A2. I actually like Vaan and Penelo (please don't kill me) along with Balthier and Llyud :) And Filo, and Kytes. I FINALLY GOT BALTHIER AND HE IS AWESOME!!! Lemures is very pretty)

FFTA2- (I love turn based startegy RPGs, having played Fire Emblem already, and this is pretty cool.) Completed as of 26th/27th November 2013 (it was quite near midnight when I got to the end. I just don't know which day I finished it on...) - final two bosses were hard! :o but it was good netherless. :D favourite character? Hurdy, because he is adorable! :)

Bravely Default- (got it for my 17th birthday :D. Just started so no idea who favorite character is. Edit: Agnes is annoying, Ringabel is probably my favorite out of the four though Edea is second. Edit 2: Agnes has improved as a character :D Tiz is cool, Ringabel is Ringabel, and Edea is gaining new levels of badass. Kamiizumi is so cool (and being voiced by Liam O'Brian helps). Airy, on the other hand, is like I have been chained to an electric chair whilst being forced to listen to Justin Beiber music and watching a sexist movie....painfully annoying. Edit 3: Airy the Jerk is horrible. Can I rip her wings off? ;) )

Theatrerhythm: Final Fantasy- (Only bought 9 pieces of DLC (cannot afford the others yet) but the rest of the music is damned awesome. Favorite stuff is We Have Arrived from Type-0, along with the FFIII and the FFX music. Least favorite- Most of the FFI music (Not as advanced as some of the other music in the series), Battle 1 from FFIV (How many times have I seen it on the Dark Note playlist?), the event music from FFIX (partially because that level was evil, mainly because the song is irritating) And Vana'diel march from FFXI (Same reason as Battle 1 from FFIV)

Also: I have watched videos of FFXIII, so know the characters and the plot- Probably, my favorites are Fang and Hope :D Fang, coz she's badass, and Hope because he probably gets the most deep of the character development :D

I have also watched Videos of Type-0 and favourite characters are Machina, Rem and...pretty much everyone in Class Zero really :D

What other Games I own: Edit

Fire Emblem 13- (I love all the characters, so, it is hard for me to choose a favorite)

Pokemon Diamond, Platinum, Soulsilver, White, White 2 and X -(completed all of them! Though I did cheat a couple of times- I.e. Sent high level Pokemon over to the cartridge, before owning the elite 4 and the champion. Though I did complete White and Y without doing this :D ) Eevee and its evolutions, without a doubt, are the best Pokemon ever.

Ace Attorney- (my childhood! :) they were the only games that my sister and I could ever play together due to our differing tastes- I like my RPGs, as you can see, but she isn't the keenest. Miles Edgeworth, Athena Cykes and Simon Blackquill are the best!)

Chrono Trigger- I had received a pirated copy of the game for my 16th birthday from Amazon (again, Amazon is screwing me over), which sucked. A year later, bought a real copy of the game. I'm not that far into it so far, though it is good :) Crono is called Dante, Lucca is Bronte and Marle is Olivia in my playthrough, named after authors and fictional characters, as there all from the same area and same time zone. Frog is Hamlet, again fitting in with the theme, Robo is called Asimov (named after Isaac Asimov, who came up with the three laws of Robotics) and Alya is River (After River Song from Dr Who.) Not sure on what to rename Magnus as yet, maybe...Mycroft? Hmmm....Favorite character....? Not sure. They are all cool.

Etrian Odyssey IV- Dammit. This game is hard. On the final boss, so if anyone has played the game and beat the boss- advice please. I am guild Emprise, and the five main members are: Blade, (Landschnekt/Bushi), Mjonir (Fortress/Medic), Daanish (Runemaster/ Fortress), Afya, (Medic/Sniper) and Azriel (Nightseeker/ Arecanist) My airship is called the Skylark. :D

I love to read. My favorite kinds of books are either Fantasy, Horror, Sci Fi, or Dystopias. I love originality, cool characters I can bond with, character death, and basically awesome stuff.

I tend to read from the Young Adult section, having read CHERUB, Darren Shan, Hunger games (which is what I wrote my first fanfic on, actually) and a list of over 200 or so books! :D

As you heard above, I also like to write. I started writing seven years ago, and I haven't looked back. Again, my writing tends to be quirky, with many genres to my name (Yes, I have written romance....don't judge me.)

The longest thing I have written was a 50,000 or so FFXIII fanfic (I am not giving the name if this fanfic away, but it is a crossover. It is terrible by my standards. Please, don't read it.) I have also written Type 0 fanfic (what can I say! The Fabula Nova Crystalis mythology inspires me. Just got XV and then I have done all three worlds!) which was slightly better, and slightly shorter- just over 10,000 words.

I do also draw, albeit not very well. I can draw people mainly, though I do occasionally do other stuff. I drew someone on draw something Cloud Strife- it may not be brilliant, but I didn't have a picture of said character available to me, and was doing it from memory- secretly proud of it. Edit: Have done some Final Fantasy Artwork, which is on this site. It's getting better.

Films? Don't watch a lot of, same with TV. I love listening to music- Classical, Alternative, FF music and basically any relaxing music is just awesome! I do not like modern-techno pop (Making some tracks on the XIII-2 just unlistenable IMO) - a lot of the stuff I listen to is older than even I am!

I am also a scholar, who loves learning new facts and figures- I <3 school with a passion (It's amazing!)

Finally, I am also a musician- I play the Piano (I can play To Zanarkand (albeit not brilliantly)) and the clarinet. I also can sing, albeit I hate doing it in public...

Retrieved from "https://finalfantasy.fandom.com/wiki/User:TheMysteriousGeek?oldid=3289624"
Community content is available under CC-BY-SA unless otherwise noted.