So you're on my page! Welcome! I'm TheBlueDragoon, or as my friends in real life call, Squall Storm, or just Storm. So you probably wondering who I am. Well, there's really not a whole lot to me. I'm just a guy who came to be wrapped up in this game we call life. I write, I make Let's Plays on Youtube, I watch anime and I go to college and so forth. My biggest hobby, ever, is gaming. Its what I live for. Few things excite me as much as a brand new RPG that I've never played. Besides Final Fantasy, I also HIGHLY enjoy playing Persona, Rogue Galaxy, Breath of Fire, Earthbound, Golden Sun, Pokemon, Azure Dreams, Zelda, Fire Emblem, Kingdom Hearts and many many other RPG series. Those are just some of my favorites. My current addiction is Atlantica Online. Its a free to play MMORPG that boasts a unique battle system for MMOs. Its a turn-based, strategic party based battle system. I've made a lot of great friends there. If you're on Atlantica, look for my character on the Mycenae server. Look for JadeArgus, leader of the WyvernRiders guild. I went off on a tangent though. More about me... I'm almost 24, and I'm founder and president of my college's anime club. My dream is to be an author, much like Tolkein and Brooks. I love writing fantasy romances. I'm a lover, not a fighter. Speaking of love, I just recently found my perfect match. Her name is Naomi. She is the single most perfect girl I've ever met. We haven't been dating long, but she makes me so happy. Anyway, I've rambled long enough! If you want to know more, go to my talk page! Later!

Fanfictions For the fics I've written over the last couple of years, some Final Fantasy, some Naruto.


Tables and Other Stuffs[edit | edit source]

Life's a beach and then you die!

In Final Fantasy XIII B.D.'s Eidolon is Leviathan (リバイアサン, Ribaiasan), which appears as an aqua sea serpent with wing-like fins near its head, an upright tail fin, and swept-back horns. B.D. first faces him as a boss in Sulyya Springs, as a test to prove his strength to him.

B.D.'s Gestalt Gauge increases by driving up enemy chain gauges and casting buffs on allies. In Gestalt Mode, Leviathan turns into a large sailboat. Its body curls into a wedge shape and the end of its tail forms the middle with the back fin serving as the rudder. The upper half doubles back over lower the half below and takes a sharp turn to serve as a mast, flattening into a small deck. The wing fins twist around to serve as sails and the top portion of the neck and head detach and reattach to the deck to serve as a jet ski-like wheel. B.D. jumps on as a wall of ice forms around the field and a shallow layer of water fills it. 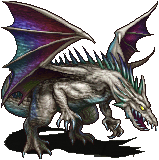