There was one SOLDIER named Sephiroth, who was better than the rest, but when he found out about the terrible experiments that made him, he began to hate Shinra. And then, over time, he began to hate everything.

Before his fall from grace, Sephiroth was one of the most lauded success stories of the Shinra Electric Power Company's SOLDIER program. His successes in the field of battle during the conflicts surrounding Shinra's bid for global domination led to his status as a celebrity war hero and the poster boy for both the Shinra Military and the company's SOLDIER program. Learning of his true origins drove him insane, causing him to be driven by a desire to destroy the world.

Sephiroth is briefly a party member during a flashback in the original Final Fantasy VII, and is both the penultimate and final boss.

Sephiroth is fought three times as parts of the final battle. He is first encountered in a "pupa" form as Bizarro∙Sephiroth, where the player can command as many as three parties to bring all of his parts down. He is then fought in his "god" form as Safer∙Sephiroth. The battle is known for its battle music and cinematic attack. A final cinematic confrontation is fought against Sephiroth in the lifestream where he duels a one-on-one with Cloud, but it is impossible to lose the battle.

Sephiroth also appears as an AI-controlled guest character during Cloud's flashback. His Materia are mastered, and neither his Materia nor equipment can be removed. While he cannot level up, he has set stats with stat growth. Sephiroth is invincible and his attacks always critical. 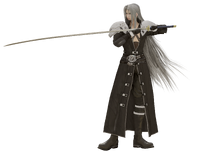 Sephiroth is fought as the final boss in Destiny's Crossroads. He has over 65,157 HP and a plethora of powerful melee attacks, many of which resemble his Dissidia techniques. He uses Aeroga, Blizzaga, Thundaga, Firaga, Boundless Void, Shadow Flare, and Heartless Angel, and can infuse himself with the elements of fire, lightning, air and ice for powerful elemental attacks.

Sephiroth is fought as a boss twice in the Nibel Reactor, and can be challenged again in missions. Experiment No. 124 is a facsimile of Sephiroth that serves as the final opponent in the "Hojo's Laboratory" series of missions.

Sephiroth is part of Zack's Digital Mind Wave since start of the game, allowing Zack to use Sephiroth's Limit Break, Octaslash, if his picture comes up in the slot reels mechanism during modulating phase. Octaslash deals eight physical attacks against one enemy.

"Those Chosen by the Planet"

Sephiroth is the focus of three pieces of music written by the series composer Nobuo Uematsu. His official theme in Final Fantasy VII is "Those Chosen by the Planet", a piece using chimes, low drums, a deep chorus, and rising guitar strings. An abridged version only including the chimes and low drums from the first part is used for both the scripted battle against the dragon in the Nibelheim flashback, and the final battle against Sephiroth, and to a lesser extent when Cloud arrives at the Nibelheim mansion up to Sephiroth leaving to "see [his] mother".

"Birth of a God" accompanies the battle against Bizarro∙Sephiroth, the first of Sephiroth's final two forms.

"FINAL FANTASY VII Symphony in Three Movements" is a symphony arranged and orchestrated by Jonne Valtonen for the Final Symphony concert series. The first movement, titled "Nibelheim Incident", is based on Sephiroth. The three-note motif of Sephiroth is used throughout the first movement as an element of structural integrity. In the final phase "The One-Winged Angel" emerges before distorting as all of the earlier themes are gradually built on top of each other. This distortion is a reflection of Sephiroth's internal chaos as he becomes aware of his past. At the end of the movement, things slow down. As Sephiroth is reborn, the familiar pulse is heard "in almost spiritual context".[6]

Sephiroth has appeared in the following games throughout the Final Fantasy series:

Sephiroth has made key guest appearances in the following non-Final Fantasy games:

While Sephiroth himself does not appear in Final Fantasy Tactics, when Cloud is transported to Ivalice by a device called the Celestial Globe, the first thing he says is, The heat! Inside my skull... No, stop... Sephiroth---no! A black-caped swordsman is also mentioned in one of the Errands. One of the enemies, Marquis Messam Elmdore, bears a resemblance to Sephiroth and wields a Masamune in battle.

In Final Fantasy XIV an NPC may say the following to the player: Why, if it isn't Sephiroth! Or was it Sephiross? Setirophx? xXxSephirothxXx? referring to Sephiroth and common variations used to name characters on MMOs (and by proxy, Final Fantasy XIV itself).

The main antagonist of the 1.0 version of Final Fantasy XIV, Nael van Darnus, refers to Sephiroth. In "United We Stand", after wounding the player, Nael takes his leave similarly to that of Sephiroth in the Nibelheim burning scene. Nael seeks to destroy Eorzea and purify it by using forbidden magicks to summon the moon Dalamud, similar to how Sephiroth attempts to destroy Gaia.

In Final Fantasy Dimensions Chapter 4, the Mask mentions a spell called Meteo and when the group questions him Alba says: "You don't mean to summon a meteor so the lifestream comes together so you can be reborn a god, do you!?"

Seraphimon from Digimon has a DigiCode on his breechcloth which translated to Japanese reads (全ては我と共に, Subete wa ware to tomoni?, lit. All shall be one with me), a quote of Sephiroth's.

A Sephiroth costume was announced to be available as downloadable content for the character Sackboy in the PlayStation 3 game LittleBigPlanet, but was never released. On July 4th, 2011, the Sephiroth costume, along with costumes of Cloud, Tifa, Aerith, and Vincent, was instead released on July 13th 2011 for the sequel, LittleBigPlanet 2.

Sephiroth's costume was released in November 2014 for Gunslinger Stratos 2.

As part of a collaboration between Capcom and Square Enix, Tetsuya Nomura was asked to design various new armor types for the playable characters, and their feline companions, in Monster Hunter 4 Ultimate. The weapon that comes with this collaboration set, the Wing of Judgement, is based on Sephiroth. His face can be seen on the shaft of the weapon, where the handle stops and where the blade begins. The blade is a single bloodied wing, fitting his title of the one-winged angel.

Sephiroth's attire is available as a costume in Mobius Final Fantasy.

He appears in death battle where he fought Vergil.

On December 10th, 2020, he was revealed as Challenger Pack 8th for the Super Smash Bros. Ultimate Fighters Pass. Also, he, alongside his actions in the Nibelheim Incident, are referenced in Cloud's All Star Mode congratulations message in Super Smash Bros. for Wii U & 3DS, where Cloud watches as Palutena walks through flames in a similar manner to Sephiroth's iconic scene. Sephiroth and his plans with Meteor are referenced in the Omnislash trophy description in the Wii U version. Additionally, in Cloud's reveal trailer, Cloud's defeat of Sephiroth with Omnislash is recreated with Ike standing in for Sephiroth (Ike is also wearing his black alternate costume to further resemble Sephiroth).

The Sephiroth costume as it appears in a LittleBigPlanet 2 advertisement. 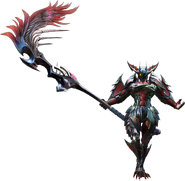 Costume in Mobius Final Fantasy.
Add a photo to this gallery

based on his battle with Cloud in Final Fantasy VII: Advent Children—a partner figure to this one features Cloud in a similar environment. A new Advent Children Play Arts figure

was released in December 2016.

of the final show-down of Cloud vs. Sephiroth made by Kotobukiya limited to 1000 pieces is considered a very rare collectible. It is modeled a statue in Ganryujima depicting the legendary swordsmen Miyamoto Musashi and Sasaki Kojirō, who were also inspiration for the characters of Cloud and Sephiroth for Final Fantasy VII.[8] A "Static Arts Bust"

of Sephiroth as he will appear in the Final Fantasy VII Remake, casting Meteor, was released October 2017. One of the most expensive official merchandise is the Sephiroth theme Seiko watch that was priced at $2,500.

Other Sephiroth-related items include pendants and rings with the theme of his single wing and/or the Black Materia, cold cast statues and even a fragrance. A life-sized statue of Sephiroth hibernating in the Northern Cave was housed in the floor of the Square Enix Character Goods Show Case in Tokyo, Japan.

These traits refer to Sephiroth's simultaneous existence in the lifestream and the planet, and his manifestations through Jenova. The counting aspects may allude to the Sephiroth-clones.

Sephiroth's penultimate form, Bizarro∙Sephiroth, is a mistranslation, and "Rebirth Sephiroth" would be more apt. [view · edit · purge]Bizzarro means bizarre in Italian and Portuguese.

It is often believed the name Safer∙Sephiroth is a mistranslation, similar to how Helletic Hojo should have been translated as "Heretic Hojo". A common belief is that "Safer" is a misspelling of "Seraph" (שרף) due to Safer∙Sephiroth's angelic appearance. A Seraph (plural "Seraphim", שְׂרָפִים) is described in the Hebrew Bible as being a humanoid angel with six wings.

Safer∙Sephiroth could easily be seen as a Seraph, with a seventh wing in place of his arm. However, the origin of the name Safer∙Sephiroth is Hebrew; the boss's name as written in Japanese is "セーファ・セフィロス", or Sēfa Sefirosu; "safer" can also be transliterated as "sefer", "sapher", and "sepher". [view · edit · purge]Sepher (סֶפֶר) is Hebrew for "book". Thus, Safer Sephiroth (Sefer Sfirot) translates to "Book of Numerations", possibly linked to the mathematical formulae that appear during his Supernova attack. However, it more likely refers to the Sefirot, the ten aspects of creation according to Jewish Mysticism.

Sephiroth having one black wing as Safer∙Sephiroth specifically refers to a fallen angel. In the non-canonical pseudepigraphical work, the Testament of Solomon, a one-winged demon named Abezethibou is summoned by King Solomon. Abezethibou has a single red wing, this mutilation symbolizing his fall from heaven, following his betrayal of God to serve the Prince of Hell, Beelzebub.

Sephiroth's plan in Final Fantasy VII to ram a meteorite into the planet and use the overflow of lifestream to become a god refers to a concept in Zohar regarding the Tree of Life, where it is said that if someone tries to fill all of humanity into a vessel, the vessel will break, alongside the universe, causing life to flow erratically yet in a familiar pattern.

Sephiroth considering Jenova to be his mother, yet also being implied to have become one with her, may allude to the Christian belief of Jesus Christ being the Son of God, yet also being one and the same with God the Father and God the Holy Spirit via the blessed trinity.