This book has maps and pictures of all hidden areas in Spira but is not a game Walktrough. For a detailed Walkthrough see GameFAQs for Final Fantasy X or GameFAQs for Final Fantasy X-2. This is a more detailed look at the world of Spira, written with fanfiction writers and other FFX or FFX-2 fanatics in mind. People who write fanfiction for both FFX and FFX-2 often want to describe a place or someone from the game, but can't find any pictures on the web. Now they can.

Spira currently uses gil as its official currency, but evidence dug out in Bikanel Desert recently (FFX-2) indicates it may have used gold coins in the past. For notation we will use "G" for gil amounts.

People in Spira can be seen weaving (Besaid), working in shops, bars and travel agencies, playing blitzball, raising chocobos, sailing boats, managing shoopufs and performing in a variety of entertainment shows. One assumes some Spira residents fish and grow produce to supply their fellow Spirans with consumable goods (like the fishing nets found in Besaid) and that there must be a market in every city/village.

The world of Spira is covered in large part with water, having only one large continent that spans from Spira's south pole—viewable in the distance in Besaid— to well above Spira's equator.

On the southern part of the continent, Spira's climate resembles the climate of the south pacific on Earth. The climate gets colder as one approaches Guadosalam, further to the north, as we can see by the clothing worn by the Guado and Bevelle natives. Macalania seems to be positioned at a high altitude, as vast icy areas can be seen on the road to Macalania Temple, yet ice is not present in the neighboring city of Bevelle. With the exception of the snowy high mountain trails of Mt. Gagazet, the northern tip of the continent seems to have a temperate or mildly warm climate since lighter clothing is worn by Yunalesca, Maechen and other Zanarkand natives and by the travel agency patrons on the Calm Lands.

Spira has its own unique fauna, composed mainly of fiends, which are hostile monsters that attack any passerby. Other animals that can be seen in Spira are small monkeys, dogs, cats, Chocobos and shoopuf. All plant species in Spira resemble the vegetation on Earth with three notable exceptions: The magical woods of Macalania Forest, the moon lilies of the Moonflow and the plant fiends, plant-like monsters such as the Ochu.

From Wikipedia: Many elements of Final Fantasy X are drawn from Japanese culture and folklore. The names of most of the main cast are drawn from either Okinawan or Ainu words ("Yuna" meaning "moon" in the former and "Wakka" "water" in the latter). The world of Spira itself is modeled on southeast asia, most notably with respect to its vegetation, topography, and architecture.

The Teachings of Yevon—said to have been left by Yevon to his daughter, Lady Yunalesca—were implemented by Bevelle to maintain order through giving the people hope that Spira may someday be free of Sin should they atone for their "sins." Until Yuna exposed their lies, the Church of Yevon taught that machina were forbidden, that Sin was a result of humanity's pride and use of machina in the past, and that Sin could only be vanquished when humanity had attained purity and been cleansed of its past sins. Until then, it was said that only the ritual known as "the Final Summoning" would provide brief reprieves from Sin's terror (called "Calms").

Like many of the precedent Final Fantasy games, the story lines of the role-playing games Final Fantasy X and Final Fantasy X-2 borrow ideas and names from ancient mythological figures and from past and present cultures such as Indian, Roman, Greek and Arabian, but the two games also have their own distinct mythology. The concepts of magic, spiritual energy, the power of memories, and the spirituality of the people are heavily intertwined, and their effects manifest in a number of situations, including sporting events, religious practices, the technology used by Spirans and even in some of the native wildlife of the planet.

The Hymn of the Fayth—composed by Japanese composer Nobuo Uematsu—serves as a transitional song and an indicator of religious importance or solemnity. In actuality, the Hymn of the Fayth was originally a Zanarkand song sung in defiance of Bevelle in the Machina War 1000 years ago. In the real world, the lyrics of the song require some deciphering to find their true meaning.

Most intelligent beings in Spira belong to one of the five sentient humanoid races that inhabit the planet. The exception are the Cactuar, intelligent, talking cacti that can even move around Spira during certain stages of their lives. The Cactuars have been the protectors of Bikanel Desert for many generations.

Humanoids — Humanoids in Spira belong to one of the following five sentient races: Ronso, Guado, Hypello, Al Bhed and regular humans. Among Spira's regular humans there are several small ethnic subgroups that share some distinctive clothing and/or physical traits. [[File:200px-Cactuar.png|50 px|left]]
Cactuar — The Cactuar are intelligent, talking cacti that appear in the games Final Fantasy X and its sequel, Final Fantasy X-2. They go through several life stages, including one where they are small mobile cacti.

In Spira, we have the regular humanoid persons and animals that can be killed or die of natural causes, but we also have several magical classes of beings. There are two types of "immortal" beings that look, move and talk as living humans yet are not alive and cannot die: The unsent and the fayth. All five humanoid races can technically become either, depending on circumstance and the individuals in question. There are also two classes of magical fauna in Spira: the helpful Aeons and the aggressive fiends. 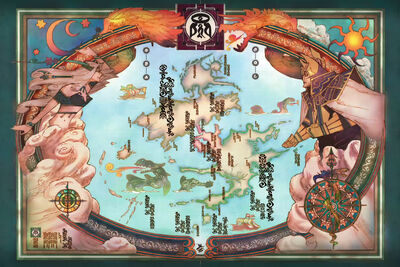 All large ruins share Zanarkand's distinctive architectural style, which differs widely from Spira's current style for cities such as Luca.

In addition to the ruined cities, Spira also has Dream Zanarkand, Tidus' home town, which is shown as a very advanced technological city, featuring little to no magic.

After 1,000 years of Sin's attacks, as one might expect, the world of Spira plays host to the ruins of many old cities and buildings. They are the "lost cities of Spira":

Each temple has a distinctive architectural style, and bears differences to that seen in the temple at Zanarkand. This can be easily explained in that the temples that are part of a summoner's pilgrimage were all built after Zanarkand fell, and were constructed by the Church of Yevon.

There are fourteen dungeons that have been discovered so far in Spira:

Many places in Spira have ruins showcasing a distinctive architetural style of tall round towers with pointed cones and a band of decorative runes around each cone. The tower colors resemble terracotta with decorations are usually blue/green and windows that tend to be circular. This architectural style is in stark contrast to that of modern Spiran settlements, indicating that the modern cities of Spira were probably built after the Machina War and the desolation of the machina cities, explaining why they have a very different style from that of Zanarkand and the other machina cities of the past.

The modern city of Luca at the time of FFX

Floating Ruins at Gagazet
Add a photo to this gallery