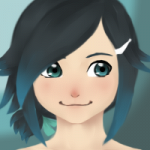 Me along with some other users whom are delegated by our managers are working on many wikis. Our manager thought that they prefer to use our name and portray their passion in their line of work and their contributions. Actually, what we do is help with most of the wiki to help us improve our analysis activities for the improvement of our very own project!

Seriously, Final Fantasy Series are all my favourites! Especially Final Fantasy VIII, IX, X, XII, Crystal Chronicles series and awesomely.... Dissidia! So.... I'm actually a very blunt person. So, if any of my edits are slightly out, but not ridiculous or some annoying additions, please PM me! I'll be sure to consider your comments!

I like describing the page's obvious information, for example like how I did the Leviathan (Revenant Wings), I describe his appearance specifically. No one complaints or commented about my edits, so I thought of it as correct and acceptable.

I'm also an artist! So, you people are all welcome to check out my made-up Wiki "Final Fantasy XII: Constelle of Transcendence" and "School Fare", founded by.... non other than-ME!

Marryl has been my persona since I was 12. Quite unusual right? Well, I don't think that it's that rare anyway. She is actually younger than me, chronologically one year younger.

Zahasuki said; "Because you're cute and perfect for the job. And you're my best friend."

My drawing style has been adapted since the first 5 years of my life of reading mangas. My first drawing style is a pure copycat of Fujio F. Fujiko's.
Then, I adapt my drawing style with Ken Sugimori's, the Pokemon series art director and artiste. After that, I tried to follow up Masashi Kishimoto's and Gosho Aoyama's.
Next, after a lot of browsing the art directors' works of Final Fantasy, I followed Ryoma Ito's, Tetsuya Nomura's, Toshiyuki Itahana's and Akihiko Yoshida's.

I've done my work as I tried to relate most of certain page's information based on their etymology, related media(such as from a magazine, one's review/interview and other publications) and some fun and somewhat 'funny' trivial things.

I (Zahasuki Harikuni), has Marryl Sheffield or user MarrylLuna to be delegated in most of my publications. Mostly, my ideas are literal adaptations as I mostly result using most media elements such as novels, games, TV shows, sitcoms and movies in my work. Some part of them will be a part of my own project, but I relate them as one of the 'spin-off' or 'cameo' elements. Check User:MarrylLuna/Sandbox under the "Idealistic Innovations" section to check out what my

Retrieved from "https://finalfantasy.fandom.com/wiki/User:MarrylLuna?oldid=1812740"
Community content is available under CC-BY-SA unless otherwise noted.