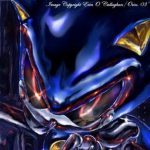 Me as a Final Fantasy Fan Edit

As for those I have played, here's how I feel about the main series, from best to worst:

Me as a Video Game Elitest Edit

I'm a fan of classic games (SNES era and before were the best), and have been playing games since 1990. My five favorite games of all time are as follows (starting with my favorite):

I consider myself an elitest at video games, constantly attempting speed runs and the like. One of my favorite challenges is what is called a "Spotter Match" in Melee. It requires every player to have someone else tell them what's happening in the game, as they themselves are blindfolded. It's quite a challenge at first, although if you have a good spotter, and you can learn to discern his/her voice from the others, it's quite fun.

As a last note, I should mention that my passion for games has lead me to create an RP with a revolutionary new system which I call, creatively enough, the "Army System" of RPing. But why should you trust me about it being revolutionary? Just ask one of the sites that ripped it without so much as a link back to the forum that CREATED the system?! Regardless, if you wish to check it out for yourself, here's the link: [Super Smash Bros. RP]. We could always use some more Final Fantasy characters.

Retrieved from "https://finalfantasy.fandom.com/wiki/User:MarioFanaticXV?oldid=98302"
Community content is available under CC-BY-SA unless otherwise noted.