Hi! I'm Kuzlalala and I'm SO a fan of Montblanc! Except for the one from FFXII. He looks so ugly!

I'm a teenager from a very hot country, who first thought that Final Fantasy was just a weird game. But when I saw someone played FFTA, I saw a very charming person-Montblanc. I became a fan of him, I could even play Teach Me, Mont Blanc on the piano! Then I played FFTA myself and I finished it until the very, VERY end. And I edit a lot at the Montblanc page. Besides, he does need a lot of information, right?

Color: Green ('cause of Montblanc, maybe?)

FF Game: Final Fantasy Tactics A2: Grimoire of the Rift

Food: Noodles in general. My real fav? Mind your own buisness!

I Created these Pages[edit | edit source]

Montblanc and Kytes, since they look so much alike! 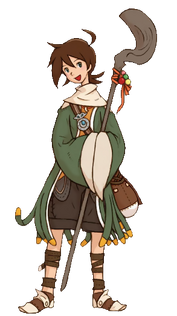 Just look at those two. Their clothes, job, status? My they really look like each other! Well, they're both black mages, using some similar staff, and they both have green and orange all over them.

WTH I'm starting to like Tellah now! I have no idea why, but I think it's because he has a funny flavor... (And the "you spoony bard!" part)

I used to draw her frequently. ^_^

You can go and check out the other comparison here!

(I like almost all words that Montblanc says. Kupo~)

Noooooo! I've been had, kupo! That's not very nice, kupo!

Marche is Marche and Ritz is Ritz! All you can do is what seems right to you, kupo!

Montblanc, after the mission "The Cheetahs"

Kupo-po!! That's it! What are you, kupo? Some sort of repository of wrested relics!?

This, this, this is most unexpected. Kupo! I... I'm beside myself, kupo.

Truth to be told, I bought that pendant once myself, a long long time ago, kupo.

Better to replace it than mope about it!

Montblanc's thought, when he lost his replica of the Gigas Pendant

Hey, you're Hurdy's brother. That practically makes you family.

There are a number of theories, kupo. I, for one, believe the crystal theory.

Ah well, I guess the moogle's out of the bag.

Oh, the months I slaved on that ship... kupoooh!

You seem... much older than when we first met, kupo.

The vote below is the "Do you like Montblanc?" question, just for you people to understand.

I like vocaloids. They're like computer programs where you can make people sing songs. I like Vocaloid2 the most. They sound so like anime. The first song I heard is from Kasane Teto. It was called Love is War. I thought of Montblanc's voice from the Radio Edition. Then I heard Hatsune Miku's song. I was thinking, How about if this was Hurdy's voice?. This leads me to a plan. I was thinking to make them female Vocaloids. Haha.

Still confused with MEIKO and KAITO, though.

Cool picture of me in a Fighter outfit. For this (and then something bad happens).

]] being hit by his rod's magick powers.

Fanart of Shivan. Isn't she so cute? 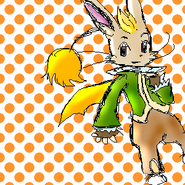 (Second) Oekaki on Montblanc. I forgot his belt! OH NO! I also post this image here.

I hate you, Montblanc of FFXII! 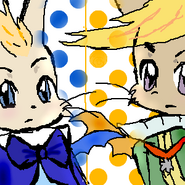 ]] and Montblanc had switched hairstyles!

My Onion Knight concept for this.

A picture I uploaded which gets to be a featured image!
Add a photo to this gallery

Luna means moon, while Stella means star, which has a certain connection to this user. "Kuz" in Kuzlalala is an abbreviation from Kuzco, a character mainly from the move The Emperor's New Groove, whom Kuzlalala used to like (before Montblanc). She still likes Kuzco a little today.

Kuzlalala's Journey at the Internet My blog

Kuzlalala at Wishingstar Wishingstar is a forum on everything, so I think it's great if you join this forum. There's even this Final Fantasy thread I made...