Hey, I'm JFHavoc, but for those of you who don't feel like typing that whole thing out (lazy) you can call me JFH or Havoc. Whatever you feel comfortable with. There are three things you need to know about me. First off, I'm a Sexy Beast. If you stick around long enough you won't have any doubts about that. Second, I am a Christian. I'm not what you think of when you think Christian. I don't have a cross necklace around my neck at all times, I don't read the Bible every day, and I'm not offended by the slightest little things. I just believe that Jesus came to earth and died for my sins. According to my religion, as long as you believe that you go to Heaven. Don't get me wrong I'm not a horrible person, I'm just not a perfect person. Last, I'm not addicted to Final Fantasy. I may obsess over it non-stop while I'm playing a game, but then I beat it and go back to my normal routine. (If that makes sense).

If you haven't already guessed, my username is the first initials of my first and middle names added to my last name. J stands for James (my first name) and F stands for my middle name. What is my middle name exactly? I don't feel much like saying. If you feel like you'll die without knowing, you could just ask me. My last name is Havoc. I think it's a pretty bad ass last name and that's just about it. Satisfied? Good.

I'm a very basic person. There aren't too many complicated sides to me. I'm a very eccentric and happy person around people I know, but I'm more shy and withdrawn around people I'm just meeting or don't know that well. I shouldn't seem that drawn back though because we're on the internet. It really isn't a big deal. I'm the kind of person who may lay back and study a person before attempting to acquaint myself with someone. I gather information on their personality, their likes and dislikes, and conclude whether or not they seem like someone I would get along with. I can be a little narcissistic at times. Although, I am a pretty awesome person. I stand out a little bit from the crowd, but I never try to stand out. That's the basics of it. It does go a little deeper than that, but it's nothing interesting enough to continue writing about.

I am surprisingly tall for my age. I'm constantly being told: "you're so tall!" It can get annoying sometimes. I have blonde hair that would cover my eyes if I didn't brush it to the side. It's rather messy and not really controlled at all, and if you try to brush it or make it look neater it only makes it worse. My hair is about average length, I don't really know how to describe the length other than average. I'm also very skinny. My dad always says I need to build some muscle, but I'm perfectly happy just not being fat. No matter what season it is I'm always wearing pants/shorts of the darkest navy blue color I can find. My shirts tend to have sleeves just long enough to pass as a short-sleeved shirt and not a tank top. They're usually either black or white. I don't wear many different colored shirts. That doesn't mean I don't have any colored shirts, because believe me I do, I just don't wear them as much. I'm always wearing a belt. It isn't because my pants are too big. On occasion that's why I'm wearing it, but as I told you before: I'm tall, and getting taller as we speak. My mom has to constantly keep buying me new pants. I always had to wear a belt because since I grow so fast she usually buys them a little big so we can buy them less often... It never works. Regardless, I wore the belt so much it became a habit, and now it's just always on. Last, my shoes never change: Black Converse High Tops. I hate them... a lot, but I can't seem to stop buying them. They're a pain to put on and there is always a wrinkle in my sock that I can never fix. I just keep getting them though. I think I'm attached to them... I don't know.

I know it's a short list but I'm expecting to beat quite a few more in the near future. : )

This is a list of games that I'm currently playing.

I really need to stay focused...

Ninja in the original Final Fantasy

Ingus as a Ninja in Final Fantasy III

The main cast of Final Fantasy V as Ninjas 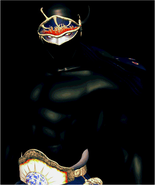 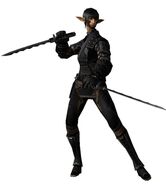 A Ninja from Final Fantasy XI

Ewen from Final Fantasy Tactics A2: Grimoire of the Rift 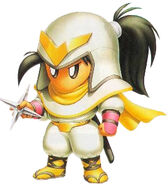 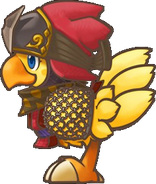 A Chocobo as a Ninja from Final Fantasy Fables: Chocobo's Dungeon

A Ninja from Mario Hoops 3-on-3

I probably won't use it much, but it's good to have one.