Completed Missions have been archived here.

The News is run by Griff

8bit BlackMage- Mission Admin.(Only he can say if the mission is done well).

If you think you have completed a mission, post it on your clan's page.

All completed missions can be found here.

As is Lucas Wolfgang -- JZ

aashleyandbrian: im working on one

Anyone who is capable of ripping sprites from their FFTA2 save file is eligible for this mission. Basically, the sprites that 8bit uploaded are ugly and pixelated. If you could upload images with WHITE BACKGROUNDS over the already existing images that would be great. To upload over an image, select "Upload a new version of this file". Reward: 1000 gil and 2cp per 10 images uploaded

I'll take care of this - PietroFF

The tables for many Revenant Wings Espers and enemies are missing stats, or even nonexistent (as in the case of Exodus (Revenant Wings), in which you should start it in the same way as existing ones). See Tonberry (Revenant Wings) for a good example. The table is only complete if each box has something in it (except for the image; our source, The Spriter's Resource, is missing some), and each stat box has the level 1-99 range. Reward: 750 Gil and 5 CP for 2 tables or needed pages.

The FFIX locations are in dire need of pictures! Memoria, Ipsen's Castle, Madain Sari, Conde Petie, Gizamaluke's Grotto and other locations could use some images, either found on the Internet or scanned from your FFIX save file.

This just in:
Pictures are required of Timber Maniacs Magazine issues displayed in Selphie's online diary in Balamb Garden. There are twelve in all.

Our coverage of the NES era is sickening. The :Template:FFIII Enemies|enemy template needs to be included on every FFIII enemy page with all information placed. Most of our pages appear to be using DS information. I cannot confirm this. So you will probably need both NES and DS information somewhere if both are not supplied on the page already.

The DS version of Final Fantasy IV has recently been released. While most members here are busy playing the game rather than filling in missing info, I need someone to get images of the enemies. I'm not sure how one will go about this, but if you know, do. When you have the images, remember to change the images on the enemies page to the DS image.

Fight off the Empire[edit | edit source]

Make a picture of your own Esper and post it in the Fanart Section. Winners announced August 15.

Make a picture of a 20 year-old Gau and post it in the Fanart Section.

Find a great MODERN song on this weeks Billboard top 40 for the offical Anarchy August Anthem and post it below.

This one might be old but it is awesome here's a link http://www.youtube.com/watch?v=rg5iOpwH8sw (my friend and I agreed it should be Irvine's theme)--The King of the Loveless

Upload a in-game image of Lone Wolf the Picpocket running away with mog in his hands.

I can't morph! These articles are horrible[edit | edit source]

Gilgamesh needs to morph, but can't because these job articles are in need. Add a good chunk of infor mation to a Job article.

Add tons of info to the Wutai Article.

First, edit three stubs. Then remodel two other articles. Then take the first letter of both the articles you just remodeled and edit a article with those two letters in it. (say you remodeled Kain and Rosa's articles, that means that you take the first two letters, K and R, and edit a article like Krile, KR being the first to letters.) Tell me, JZ, Griff, or 8bit that you are done and we will give you a name of a article in SERIOUS help. Edit the new article and tell me. I will give you a riddle, which will tell you to go to a new article. After you edit the article which the riddle lead you to, tell me the following things. Okay, suppose you told this to me:

After All this, you get 1000 Gil and the EDEA BRANCH, which is a sign that you completed one of the great missions, Edea.

Okay, I'm pissed for 2 REASONS. Why can't people actully do these simple missiomns. If enyone does a mission, they get the missions rewards plus 100 gil.

Remodel 1 Article that is a Enemy Article.

I am Aware that there is a couple missing location pages for Final Fantasy V. Create these pages and expand them to a regular page. No stubs.

"War is Gods way of teaching us geography"[edit | edit source]

Create and fill every missing Final Fantasy Tactics A2: Grimore of the rift location page. Remember also that it would be helpful to include every single mission that takes place in that area.

Find enemy stubs at Category:Enemy stubs and expand them. This includes filling in tables, adding Related enemies, and other info.

Well done. Are you going to be doing more? -- JZ

Ok, are you doing any other monsters? I'm on recent changes right now and I'm watching your edits. Perhaps you're another candidate for Clanner of the Month... -- JZ
I realy think that this and the FFVI mission's are both rip-off's but this on seems easier so I will do it.--NeoBahamut 22:41, 29 July 2008 (UTC)

This one is difficult, as you either have to find an internet page, or have multiple copies of FFVI ^_^'. You're mission is to go to every Final Fantasy VI enemy page and add fill in the fields for "SNES", "PS" and "GBA". As many people in one clan can take part of this at once. There are 187 pages.

Doing it in GBA bestiary order.

PROGRESS (SORTED): Up to and including Ghost (total of 40)

I'll sort out your Gil sometime today for you -- JZ

The Gil has been sorted -- JZ

As long as it gets done, it doesn't matter how long it takes. -- JZ

Check out the page at Special:Wantedpages and create as many as you can. Gil will only be awarded if the article is NOT a stub. If the article becomes featured, there will be more rewards.

"Never shame your name... never tolerate injustice... living true to your heart is the warrior's way... the Ultima way. "

these asre used to buff up your esper and make their home nicer.

these espers are for a clan member only a few types though.they work like normal espers,but have lower hp and stat,can not have more then 3 spells,and can only be used by the espers owner.they use all esper items

The Jobs and what category they fall under. Remember that a -200gil penalty is induced if you are caught doing a Job Mission that is not within your Job Type.

These missions are competitions. First to complete wins.

The Clanner of the Month is chosen by JZ.

Each Clanner of the Month gets 500 gil.

Next month's Clanner of the Month will be chosen from the fanart.

The Clanner of the Month is JZ!

Awarded for Redirect missions, and general day to day upkeep of the Pub!

Can now be found on individual clan pages. Materiasdraw and Griffen can now tell you your rank.

Next Event: Anarchy August-this event will allow you too change jobs freely + Missions will give you double Gil!

BEHOLD! THE CRAPPINESS OF MY ARTWORK!!! CoD ^_^

Chocococobo, made by your's truly CoD ^_^

Todays Receipeant of the 200 gil is

Da DaDa Da, Cloud Of Darkness. Plz say you are taking your gil by putting a message under this section. Congrats!

Gimme my gil I mean, uh, thank you for the award for something I didn't even kknow I did. CoD ^_^ 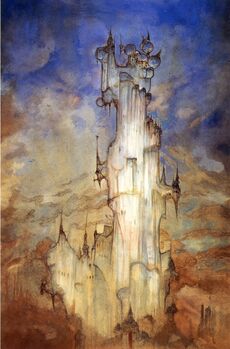 This section's editor is JZ.

You have been warned. DO NOT MESS WITH THIS SECTION! -- JZ

You can use this one to help advertise the pub. -- JZ

Add any custom userbox requests here, and I'll respond to them as soon as possible - JZ


Is it you that's been vandalising my section?? Yeah, and I removed your userbox. -- JZ

I only added the clan ultima template in. CoD ^_^

It was probably Griffen. 8bit

It was. I searched the diffs and found it was between two edits by him. -- JZ

Thought I'd add something random -- JudgeZarbi
Uncyclopedia Admins vs 67.72.98.46. Large amount of comedy! Maybe even a well known face there.
Comedy galore. The old well known face, alongside Kefka.